With a motto of “If you’re not looking ahead, you’re already behind” and a focus on customer satisfaction, quality, and innovation, Advanced Jiffy Machine Products is a custom gear manufacturer that’s continuously increasing its capacity and efficiency.

At the recent AGMA Annual Meeting, Mark Jackson, process engineer at Advanced Jiffy Machine Products, heard much discussion about the Internet of Things (IoT). And while it may seem overwhelming for any business to keep up, he feels confident that, for a small gear manufacturing company in Monett, Missouri, they are steadily staying on the cutting edge by implementing the latest technology with automation and machine monitoring.

“As a small company, it’s sometimes hard to implement everything that you want, and everything takes more time than you wanted it to, but with that said, the IoT talk at the Annual Meeting was very relevant, and it doesn’t have to be major things,” Mark said. “An example for simple machine monitoring: You can set up a Nest camera to monitor your machines — that could be a small step to implementing IoT. You are communicating, live streaming, and watching your processes. Or, putting a voltage reader on your machine. Connect that in, and then you get the reports straight to your smartphone or computer. You just implement some little things like that, and you can instantly see efficiency increase without being overwhelmed. And we will continue to add more and more IoT as time goes on.” 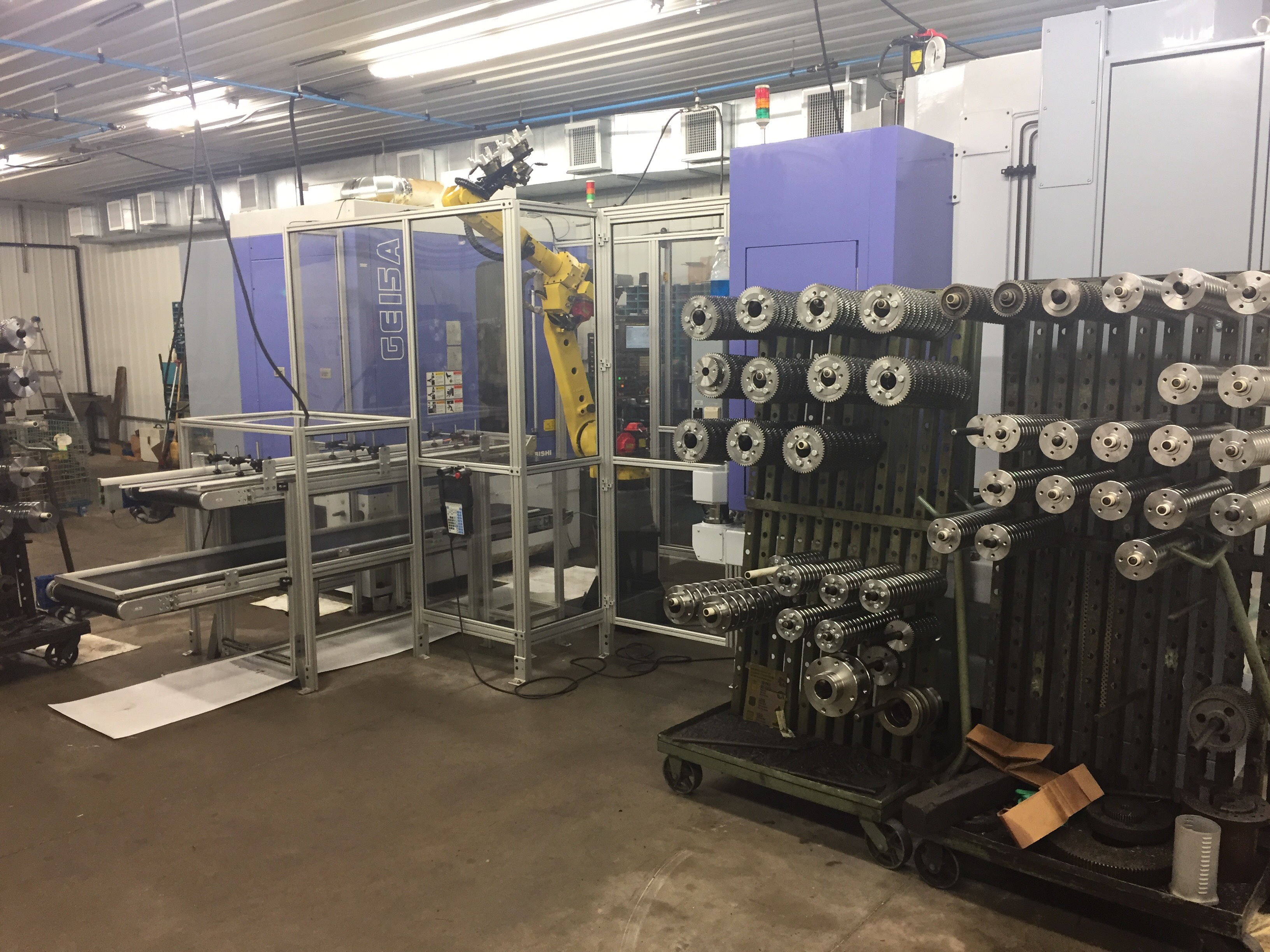 Advanced Jiffy Machine Products has also focused on increasing efficiency and lean production, beginning with its first piece of automation — a custom, automated RoboDrill cell — about three years ago.

“We were over capacity in our turning area, so instead of taking extra time to do live milling on our lathes, we added the automated RoboDrill cell. That cut our lathe cycle times in half and increased our throughput,” Mark said. “It worked so well that we ended up adding a Nakamura AS200 to that same cell during our next phase of automation.”

With the increased capabilities, Mark says they can do lights-out automation overnight and weekends, setting up roughing operations to run through, without anyone having to be there.

“In that cell, we can do roughing and finishing, milling only, or both turning and milling in the same operation,” Mark said. “And there are a lot of different applications that we can run through it. We can do the turning on the Nakamura, and then the robot will take it from the Nakamura and load it into the RoboDrill. We can separate the processes and have better throughput.”

In the third phase of implementing automation, they also added another cell with a robot, a Mitsubishi GE15 gear hobber, and a Mitsubishi FE30 gear-shaving machine, where all of its helical gear sets run through.

“It’s robot-loaded and can run lights-out, too,” Mark said. “We can more than double our output efficiency with the automation. And, we do live monitoring on the cells, so we can monitor processes on our phones to see if anything alarms out or when more parts need to be loaded on the conveyors. I don’t know of many shops our size that have implemented the level of automation that we have. And we will continue to add more to our equipment.”

Its strategic focus on technology seems to be working for Advanced Jiffy Machine Products, which began in 1979 by Mark’s father, Kevin Jackson.

“My dad started the company doing small tool sharpening as a general machine shop,” Mark said. “And in 1983, they started making gears. That was a niche they found. We’ve been making gears ever since.”

Today, the company specializes in cutting helical and spur gears from 1 inch to 12 inches and some gear shaping in a similar size range. It serves the industrial market with many different helical gear sets; the oil and gas industry with components that go into pump jacks; winch gears for military-grade winches; and farm implements. The majority of its customers are within about a 250-mile radius, but Mark says they are working to expand their reach into Ohio, Indiana, and Illinois, where there are more needs for gear manufacturing.

Its facility has nine gear-cutting machines and several turning and milling centers to support gear production.

Kevin says some important milestones for the company have been adding the new machinery and completing building additions in 1991, 1994, and 2014, as well as having his two sons come on-board full-time, becoming a truly family-operated business with about 15 employees.

“Mark started in 2008,” Kevin said. “He had been out of college awhile, and he wanted more out of what his current job could offer him. He wanted more of a challenge. So he came into the gear manufacturing business with us. Mark’s younger brother, Bryan, also started here about the same time, and he continues to expand his role as production manager as time goes on.”

With a degree in biology and chemistry minor, Mark was working as a microbiologist before joining his dad at Advanced Jiffy Machine Products.

“It’s not that much of a jump, from biology to gear manufacturing,” Mark said. “There are some parallels, more than people think. There’s the strong attention to details, using a scientific process and approach, and looking at things on a very small scale.” 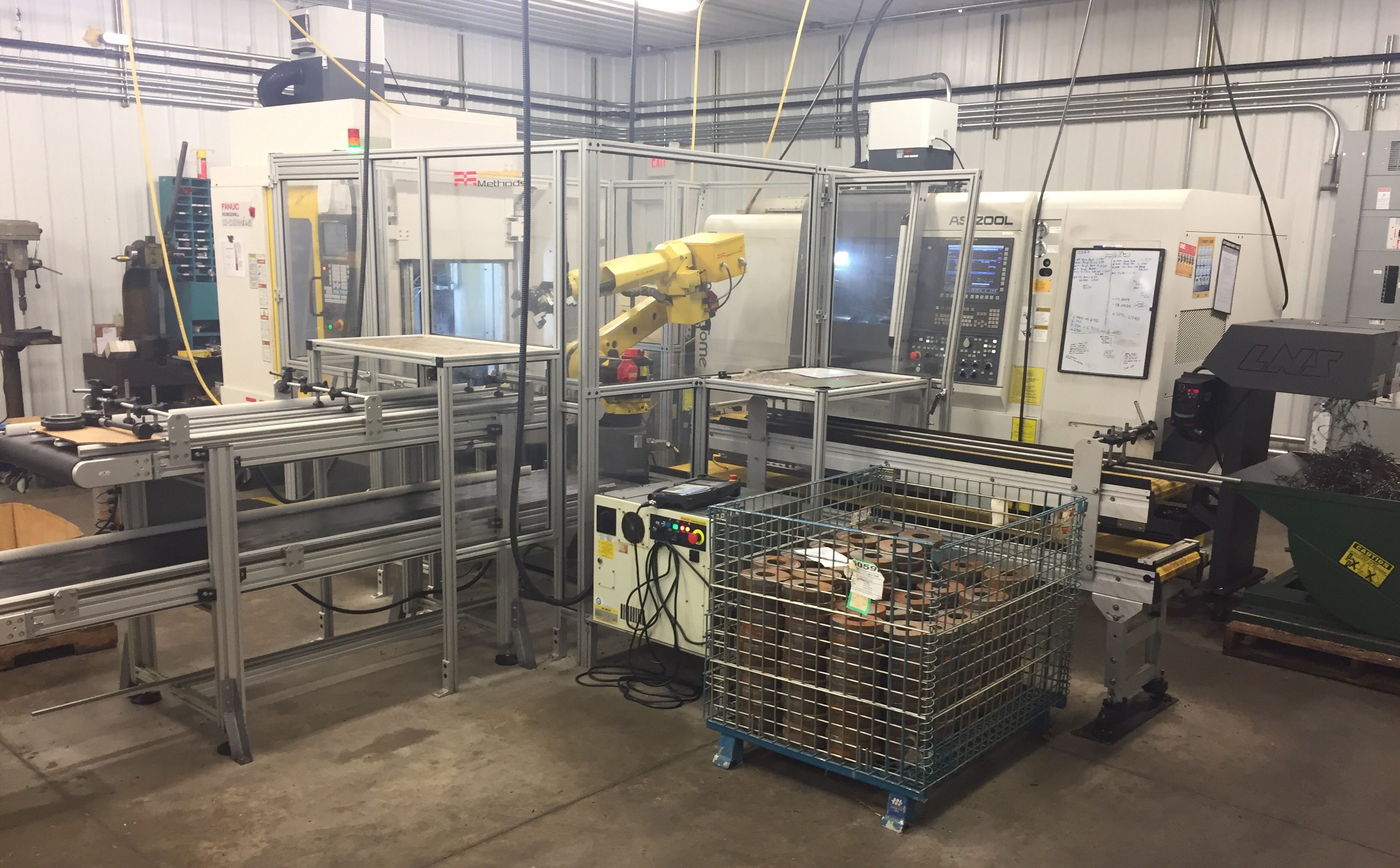 Advanced Jiffy Machine Products works with a variety of materials for the gears it manufactures, mainly carbon alloy steels 8620s, 4140s, 1018s, but also aluminum bronze for worm gears, as well as nylon, phenolic, and stainless steels for other applications.

“We do exotic materials, too, such as Inconel, Monel, and Nitronic 50, mostly for oil-and-gas applications due to the anti-corrosion benefits, as the parts go deep into the ground or submersed in the ocean,” Mark said. “There are not a lot of materials that we haven’t worked with.”

Having this experience with a variety of materials helps the company solve problems that its customers may be facing and offer recommendations for different materials to achieve better performance.

“We have a customer in the racing industry that came to us when their gears were not holding up very well,” Mark said. “So we recommended that we change the materials, use an 8620, and carburize it. They were using a soft material without heat-treating it, and the gears were tearing up and not lasting long. So we modified the profile by shaving it, and we hardened and carburized it. We made them stronger and last longer.”

For the future, Advanced Jiffy Machine Products expects to add more services such as consulting, as well as inspection services with a new machine recently ordered, the Wenzel WGT 280. It is also adding outside inspection services to complement its capabilities and to support its current products as well as contract and support for all products.

With its continued focus on new technologies, Advanced Jiffy Machine Products plans to increase automation as well as more implementation of IoT into its processes.

“We are looking at adding an automated deburr cell later this year,” Mark said. “After that, we are hoping to add another automated roughing and finishing cell similar to the one we have but with improvements. We will also update software and automate some more processes. Once we get the inspection machine, we would like to try to get more into higher-production automotive, and aerospace is a target area as well.

“Technology moves so fast, but as long as we keep looking forward and aim to be progressive and innovative, I think we are heading in the right direction,” Mark said.