A breakthrough design has been developed to optimize stiffness, stability, and speed of the gear generating grinding machine, reducing non-productive time in the process.

The increasing demand for efficiency and noise emission of gears pushes the grinding process to its limits. With the widening range of applications for automatic planetary transmissions and increased number of speeds (currently up to 10), gears on average are smaller and smaller, while production volumes are increasing. The same applies to industrial applications, for example, geared motors, which are currently introduced in many actuation systems, even in homes. The vast majority of this kind of gear fits into a range of 160 mm in diameter and below a module of 3 mm. 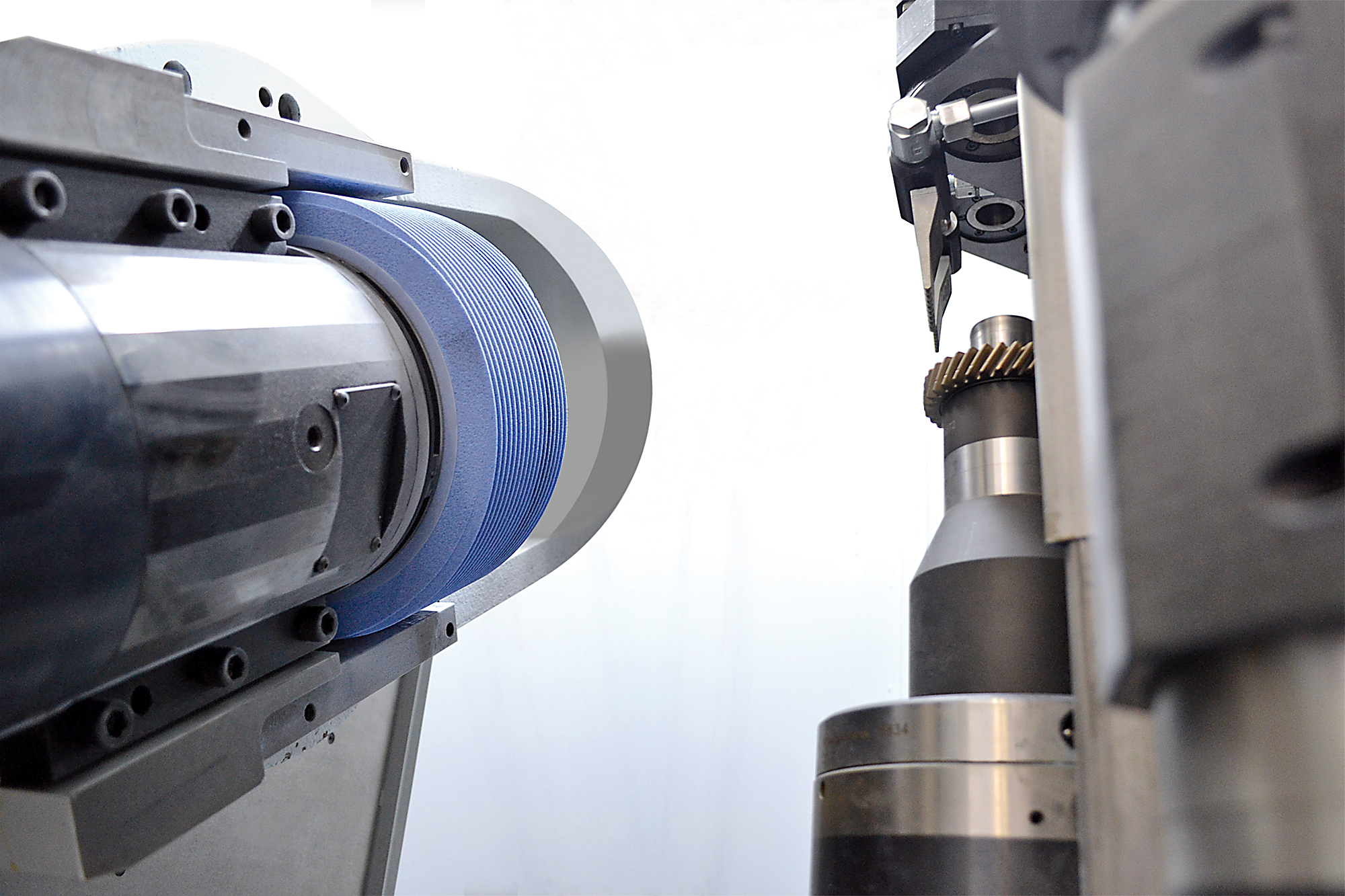 Over the past decade, productivity in hard-gear finishing, especially in threaded wheel grinding, has not evolved much. Grinding technology, tools, and application data have reached a state of the art that cannot be significantly further improved — at least for the time being. Therefore, stiffness, stability, and speed of the gear generating grinding machine have become the main design targets for this high-dynamic process.

New machines have been introduced by a variety of suppliers; however, they follow similar concepts, which, for technical reasons, do not allow a production improvement because of constraints of the concept itself. Most current gear grinding machines have two workpiece spindles to reduce non-productive times when changing parts. While a gear is ground on one spindle, parts are changed on the other. Despite this, the non-productive time has never been under five seconds because the spindles are located on a rotary table that is hydraulically locked in position but is inaccurately floating while moving. Unlocking, settling after moving, and locking it into the new position take more time than the motion itself and cannot be any faster by design.

The Samputensili G 160 presents a new design to solve this. Furthermore, it optimizes static and dynamic stiffness compared to current standard machine architectures.

Instead of using a rotary table to carry the workpiece spindles, the G 160 splits the X-axis of current machines into two linear slides (X1 and X2) — each of them carrying one workpiece spindle (see Figure 1), thereby eliminating the rotary table and all the constraints connected to it. Both work spindles and the associated radial X-axis slides are continuously under full position control, and both can be moved in and out of the workspace simultaneously without interfering with each other. This is the first time that “on-the-fly” synchronization between the workpieces and the grinding wheel can be fully utilized.

In addition, repositioning the grinding wheel for the next part can also be done at the same time. No axis is waiting for another — everything moves simultaneously. Being driven by high-dynamic linear motors, the change of workpieces comes down to record-breaking 1.6 seconds including meshing, synchronization, and simultaneous repositioning of the tool. And this is achieved not by overloading machine components, but by the concept of the G 160 (see the sample application in Figure 2).

Another significant part of the new concept is the elimination of the physical shifting axis. Threaded grinding wheels fully utilized need to be shifted (displaced) along their axis between workpieces to bring in “fresh” grids. They also need to be shifted during grinding to create a diagonal instead of a pure axial motion. To accomplish this, all current grinding machines use a physical Y-axis underneath the grinding spindle. Unfortunately, there are serious space constraints in this area, so this Y-axis typically is designed small with low stiffness. On the other hand, only this axis along its direction is carrying the highest dynamic load, which is created by the generating process.

The new Samputensili concept of the G 160 addresses this constraint. Rather than stiffening the Y-axis, the G 160 completely eliminates it. By doing so, not only is this “weak spot” removed, but also, instead of stacking four axes — radial (X), axial (Z), swivel (A), and shifting (Y) — only three axes are stacked onto each other (Y, Z, and A) before arriving at the grinding spindle.

This architecture with three stacked axes instead of four is a breakthrough. When compared to existing machines, this architecture significantly increases the overall system rigidity, thus enhancing productivity and grinding quality. With the shifting axis not physically present, its motion is simulated by an interpolation of the Z and the Y axes, referred to as the virtual shifting axis (see Figure 3). Both of these axes are not restricted by space constraints and are therefore massive, strong, and rigid.

There is also no additional axis needed to perform the dressing cycle. The dresser is mounted on the X1 axis slide next to the workpiece spindle. So, the precise and highly dynamic motion of the linear motor can also be used to fine-tune the geometry of the grinding wheel and the corresponding gear. It enables topological modifications of the gear flank at an unprecedented quality. Having the dresser located on the same slide as the workpiece spindle makes it now totally insensitive to thermal or other types of deviations.

When developing the G 160, particular attention has been paid to ergonomics, addressing the user needs for operating, setting, and servicing the machine. 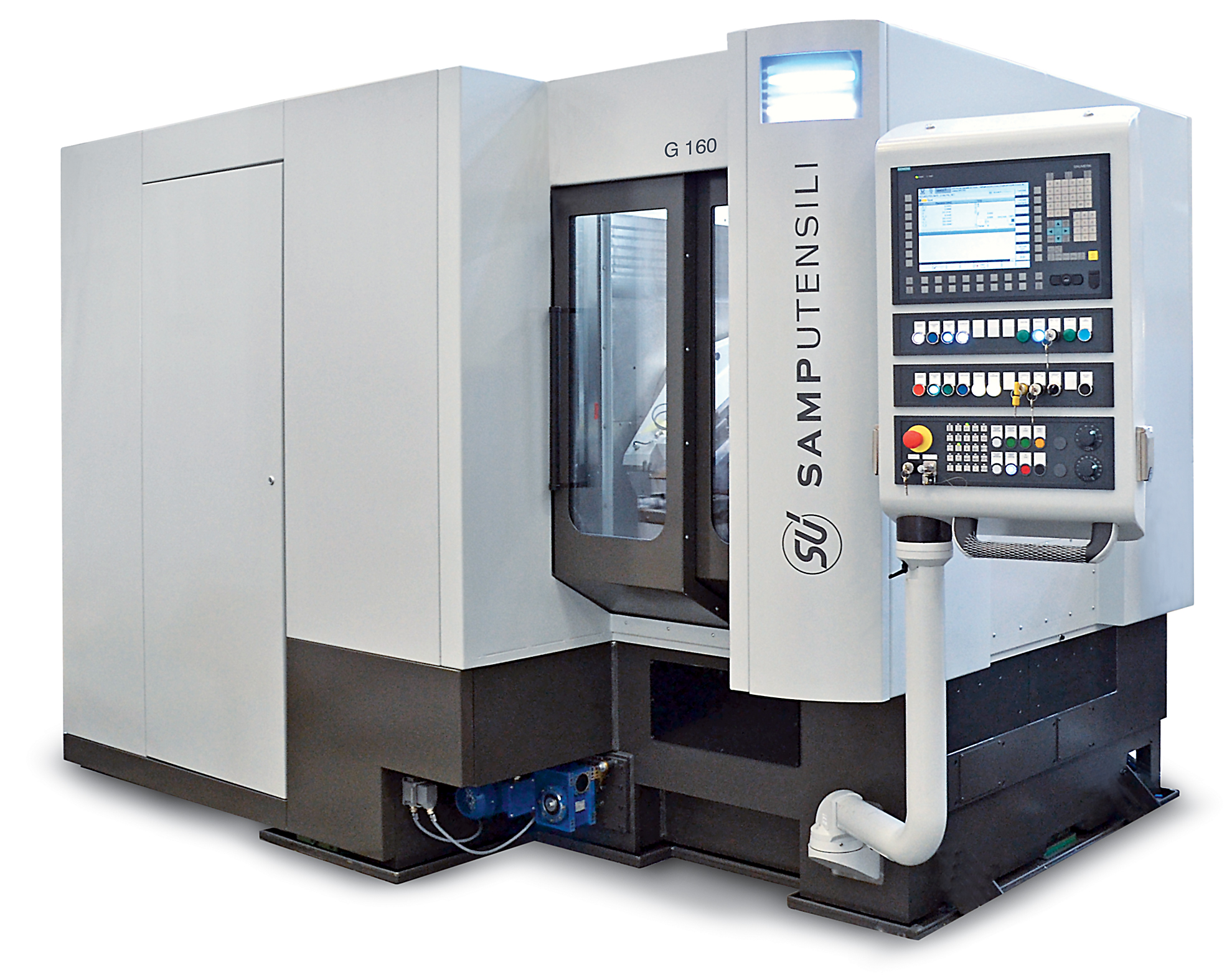 A secondary loading door provides access to the two work spindles when retracted into a loading position. This is where clamping fixtures, including tailstock centers, are changed, and meshing sensors are adjusted. The loading and unloading interface is designed to attach a variety of external loading systems, ranging from simple pick-and-place to flexible robot systems. To avoid sacrificing cycle time by the loading system, double grippers are used for cycles faster than 20 seconds. Cycle times down to eight seconds can still be reached at full productivity by using an internal SCARA loader.

All mechanical, fluid, and electrical components are easily accessible for service or maintenance either from outside the machine or by opening a door to the service aisle between the machine and electrical box. All built-in motors and encoders have separate covers to provide access if needed. All these features fit into an incredibly small total floor space.

Finally, this same concept is also available on the SG 160 Sky Grind machine, enabling the newly developed, patented dry grinding technology. On this machine, the process is split in two main passes: roughing and finishing. For the roughing process, skive hobbing is implied, whereas worm grinding is used for the finishing process. The SG 160 Sky Grind removes the majority of the stock allowance with the first pass using a hobbing tool, which has the advantage of not heating the workpiece excessively. Subsequently, with the second finishing pass, a grinding wheel removes the remaining stock without causing problems of overheating the workpiece, therefore resulting in a completely dry process. 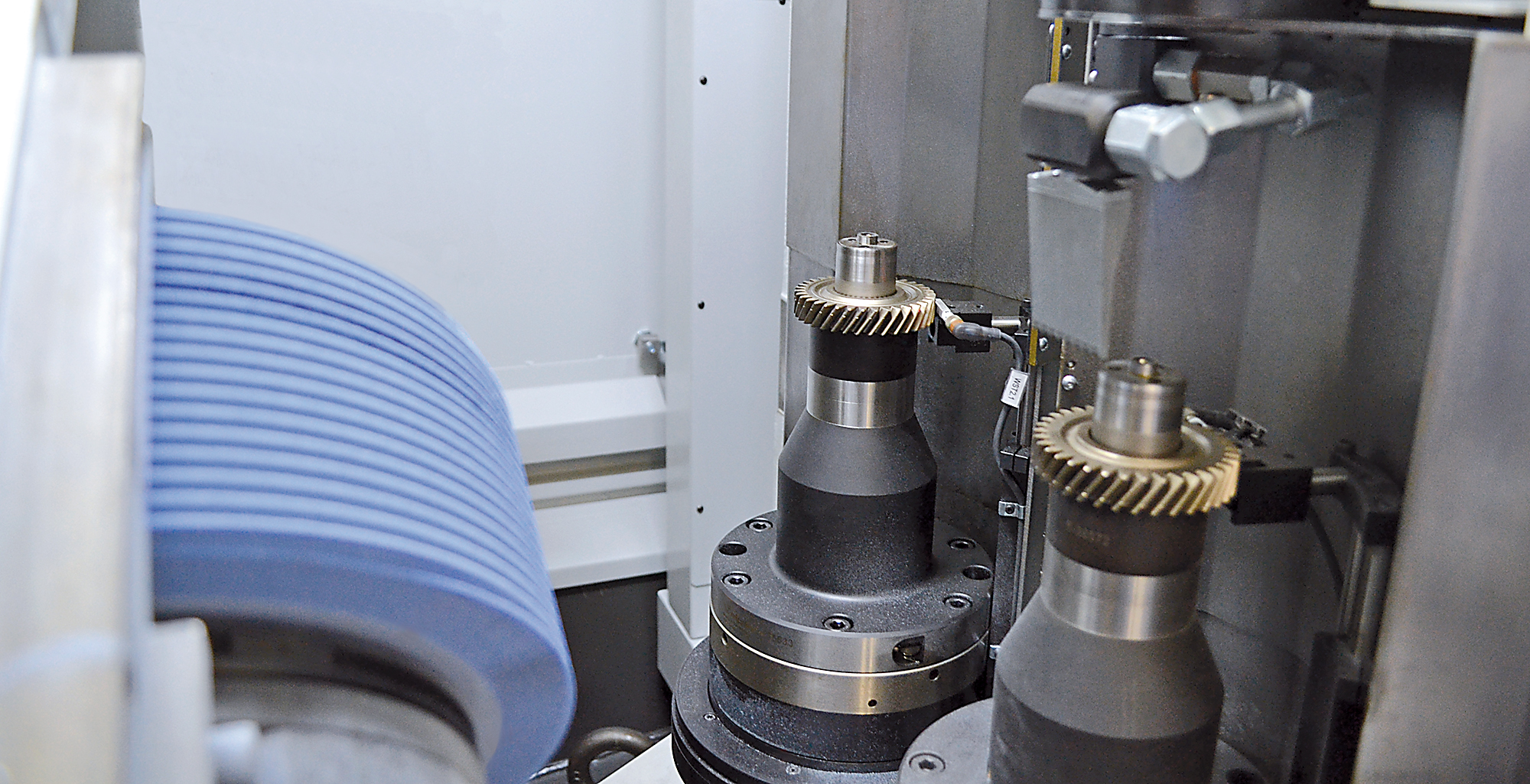 The additional advantages include:

Samputensili is making a major step forward in gear grinding with the development of the G 160 and its “green” sister, the SG 160 Sky Grind. Building partnerships with major automotive and industrial companies and the continuous positive feedback demonstrate the acceptance of these new concepts.