From producing buggy parts at the turn of the last century to aerospace and wind-power applications today, this company’s growth reflects the evolution of U.S. manufacturing.

In 1903 a group of investors came together to found Canton Drop Forge, located in the Ohio city of that same name. Soon afterwards Charles A. Brauchler purchased a significant amount of stock, and within a few years he had taken the company’s helm. “He was really the driving force behind the company’s growth in the early days,” according to Bill Maykowski, vice president of sales and marketing, “and his family retained leadership until 1981, when they decided to sell it to another group of investors including James J. O’Sullivan, who is now the company’s principal owner and chairman of the board.”

By that time Canton Drop Forge (CDF) had grown in every way imaginable. With its beginnings in providing forgings for railway cars and maintenance—also producing parts to be used in horse–drawn buggies and, later, the first automobiles—it had extended its reach into many of the markets it currently serves, including aerospace, mechanical power, transportation, oil field, power generation, off–highway, and pumps and compressors. There were many important milestones along the way, however, including patents awarded for some of the parts the company produced—and still produces—as well as a move to the facility it still calls home.

“In 1942 the U.S. Defense Department built a new plant in Canton for the production of forgings to support the war effort,” says John Motsay, vice president of business development, “and CDF operated the facility, making parts for aircraft and land–based fighting equipment. Once the war was over the company purchased the plant from the government in 1951.”

With some 250,000 square feet of space under roof and plenty of land should the company need to expand, Canton Drop Forge now employs about 325 people and ships to customers around the world. Market diversification is one key to the stability CDF has enjoyed, and it is constantly seeking new markets to serve, such as wind power, for which it already produces gears. As for capabilities in that area, CDF’s expertise involves closed die gearing, with the largest currently produced having a 42-inch OD. New equipment soon to be in place will expand its upper range significantly, complementing a long list of value-added services.

“We are a fully integrated forge shop,” Maykowski says. “We provide heat treating, rough machining, and in–house die manufacturing, where we make and maintain our own dies on modern CNC machines. In addition, we have an excellent metallurgical staff that can assist customers in meeting the material specifications for their particular application. While we don’t claim to be gear designers, we are experts in how the forging should be designed, so we’ll work with our customer’s plans and make suggestions as to how we can make them more ‘manufacturing friendly.”

Another important role CDF plays involves obtaining the raw materials required in order to meet its customers needs, which has become more challenging in recent years as suppliers have found themselves struggling to meet the demands of new and ever–growing markets. “We do keep a certain amount of inventory on the floor,” Motsay says, “but we also have a very strong relationship with our suppliers, including Timken, which is located here in Canton. We work with all of them very closely to make sure that we’ll have the product we need on time, and we also keep the lines of communication with our customers open, sometimes letting them know when they need to place an order so their on–hand stock won’t become depleted.”

One way the company achieves such efficient operations is by maintaining “a thin layer of upper management,” according to Maykowski. “We consider it critical to always be responsive to our customers, so no one—including our president, Brad Ahbe—is insulated from the day–to–day operations. Through Mr. Ahbe’s top–down efforts, CDF is also actively committed to continuous improvement, which includes lean manufacturing and Six Sigma, and safety is a very important issue for us as well. CDF is AS9100 and ISO9001 SRI certified, which is proof of our dedication to doing things the right way.
“But our main thrust at Canton Drop Forge is satisfying our customer’s needs,” he says, “and providing quality parts on time is really what we’re all about.” 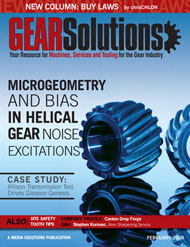