Jeff Barnes knows Fellows gear machines, and those “in the know” consider him the primary source for rebuilt equipment, parts, and service.

Growing up, Jeff Barnes spent his days neck-deep in machinery. He and his father were into racing — circle tracks, with modified cars — and after working on the engines, frames, and bodies in their spare time, they would take to the racetrack on the weekends, putting their work to the ultimate, real-world test.

These days, Barnes is still doing the same thing, in a way. But the cars have been replaced by Fellows gear-cutting machinery, and the track by a long list of satisfied customers who purchase rebuilt and retrofitted machines from New England Gear, which Barnes established nearly a decade ago.

“When I was 17, I started working for a gear shop while I was a junior in high school, and I progressed from basically shoveling snow off the driveway to designing special tooling and machinery for difficult jobs,” he says. “We had a lot of Fellows equipment on hand, and I started taking them apart to learn about how they worked. After awhile, I began disassembling and completely rebuilding later-generation Fellows gear shapers for sale to our customers, and it went really well.”

After some 15 years with the company — the last five spent on the Fellows retrofitting operation — Barnes came to the realization that he’d reached the limits of what he could achieve working for someone else and decided that it was time to realize his dream of starting his own company. He knew the market was there, and he also knew a man in the machinery business — who would eventually become his partner — who was willing to give him a corner of his warehouse. So he took a deep breath, jumped in, and he hasn’t looked back since.

“The biggest motivation was that I wanted to own part of the company,” he says. “I don’t know how you sugarcoat that. But these newer-generation Fellows machines are rock-solid, all they need are updated controls and electronics. So I went out and started buying every single machine I could find, and there were a lot of them out there. I’d buy them, do all the necessary upgrading and retrofitting, clean them up, paint them, and I had a machine that was ready for the customer to buy and go straight to work–and at anywhere from 40 to 60 percent the cost of a new machine, depending on the electrical package they chose. And with new machines costing in the neighborhood of $300,000, that’s a pretty significant savings.”

With some 200 machines on his warehouse floor — and he’s moved into his own 13,000 square-foot facility since the early days — Barnes says he probably has the largest selection of used, retrofitted Fellows equipment in the world. But it’s about more than inventory, he says: “When somebody who has a Fellows machine needs help with it, and they call somebody to get some answers, most of the time all they’re going to get is a bunch of talk,” he says. “But I know these machines inside and out, and if they’ll call me, they’re going to find out what they need to know. I’ll give them straight answers, and we’ll find a way to solve their problem, no matter what it is.”

Sometimes the solution is as simple as a part that will get the machine back up and running, of which New England Gear has plenty. “We have a vast selection of new and used parts in stock, and we can get them out the day they’re ordered,” Barnes says. “When you buy as many machines as I do, you’re going to have plenty of spare parts, so we want to be the first company that comes to mind whenever somebody is looking for a part for their Fellows machine.” 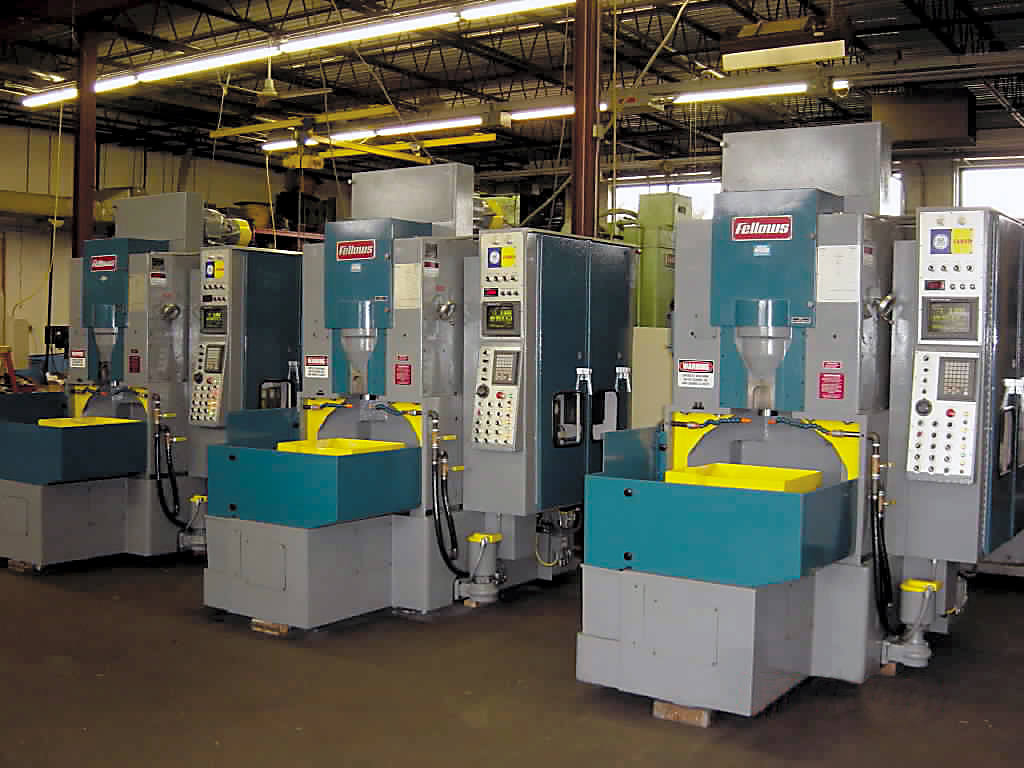 An acknowledged “gearhead” — “I’d much rather be working with the machines than hanging out in the office” — Barnes spends a significant portion of his time in the office these days. Apart from organizing the company’s workload, he spends a great deal of his time doing mechanical drawings for use on the plant floor.

“We have seven employees,” he says. “I’ve got a computer guy who handles all the invoicing and computer-generated drawings for CAD/CAM, and the electrical drawings and schematics and operational procedures, that’s all done in-house. In fact, everything is done in-house. We have an electrical engineer who designs all of the custom software for us, and all of the parts are made complete right here.

“I also have people to help me with the business side of things — like my partner, who has more than 35 years of experience in the manufacturing and machinery business, and whose help has been invaluable — so that I can spend my time working with customers to make sure they get exactly what they need, whether that’s machines or information.”

In addition to rebuilding and selling Fellows machines and parts, the company has some exciting new developments in the works, involving a machine they’ve developed themselves. “We’re building these machines complete from scratch, from castings all the way up to the final assembly, and we have a lot of ideas that are currently on the drawing board,” says Barnes. “We’re developing what they call a sliding-head gear shaper for true cutter positioning. That’s something that we’re developing now, and we’ll be offering it on the market shortly.”

No matter what form the company’s growth takes, it all revolves around building a reputation as the number-one source for rebuilt Fellows machines and parts, and on developing strong relationships with its current and potential customers. “In the beginning we were doing a lot of mechanical rebuilding, with only standard electrical upgrades,” Barnes says. “But then, with my partner’s strong CNC electrical background, we were able to add major electrical retrofitting to the package. At this point, all the machines that we rebuild have between one- and six-axis controls, depending on what the customer wants, and we’re also rebuilding and retrofitting Hydrostrokes, which is a line that we developed here. Plus we try to have one of everything in stock, and the machines we have on the floor are in all different configurations.”

Barnes also takes pride in the fact that New England Gear has helped a number of companies actually get into the gear business. “We’re a small company with a loyal customer base, and that’s because we’re always willing to go the extra mile,” he says. “We’ve helped put people in the gear business that weren’t in it before. In fact, General Electric’s largest supplier of rotating turbine hubs uses our machines exclusively, and we helped get them in the splining business about five years ago. The thing that I probably enjoy the most about being in this business is visiting a happy customer and seeing them using our machines.

“I want people to know that, when they need something for a late-model Fellows machine, we’re the guys to go to. We’ve got the machines in stock, we’ve got the parts in stock, we offer service, and we’ve got the technical knowledge that’s required. If they call here, they can get real answers, because I know that product. That’s the word that I want to get out there.

“I think people are begging for that type of service, but they just don’t know who to call,” Barnes says. “With our parts inventory, we can get just about anybody back up and running. And another thing is that we own all these machines — we’re a debt-free company, solid as a rock. And many times, we’ll actually loan a machine to a customer while we’re rebuilding theirs, to prevent them from having downtime. So that’s another nice thing that we’re able to do.

As for racing, Barnes says he still thinks about it from time to time. “Once you get it in your blood, it’s always in your blood. But I think I’m a lot more likely to be a sponsor than a racer these days.”