For these rebuilding experts, attention to detail comes standard with every purchase.

Machine Tool Builders, Inc. is always moving toward something new. established in 1995 to provide service to the gear industry, today MTB is an engineer-owned company with a unique mix of capabilities for regenerating machine tools, especially gear shapers, hobbers, and grinders.

Though MTB has been an established company for almost 20 years, publicizing its capabilities has been minimal until now. Owners Ken Flowers and Ron Peiffer are both highly skilled controls engineers who are extremely hands-on throughout the organization. Flowers worked for American Pfauter and became an understudy of German engineers, even staying in Germany for a time to understand their practices. As he worked with gear experts who trained him on how to build and repair mechanical and CNC-controlled machines, Flowers later developed software for gear manufacturing at NUM Corporation, then developed his own conversational software for gear shapers, hobbers, and grinders, which is offered at MTB. 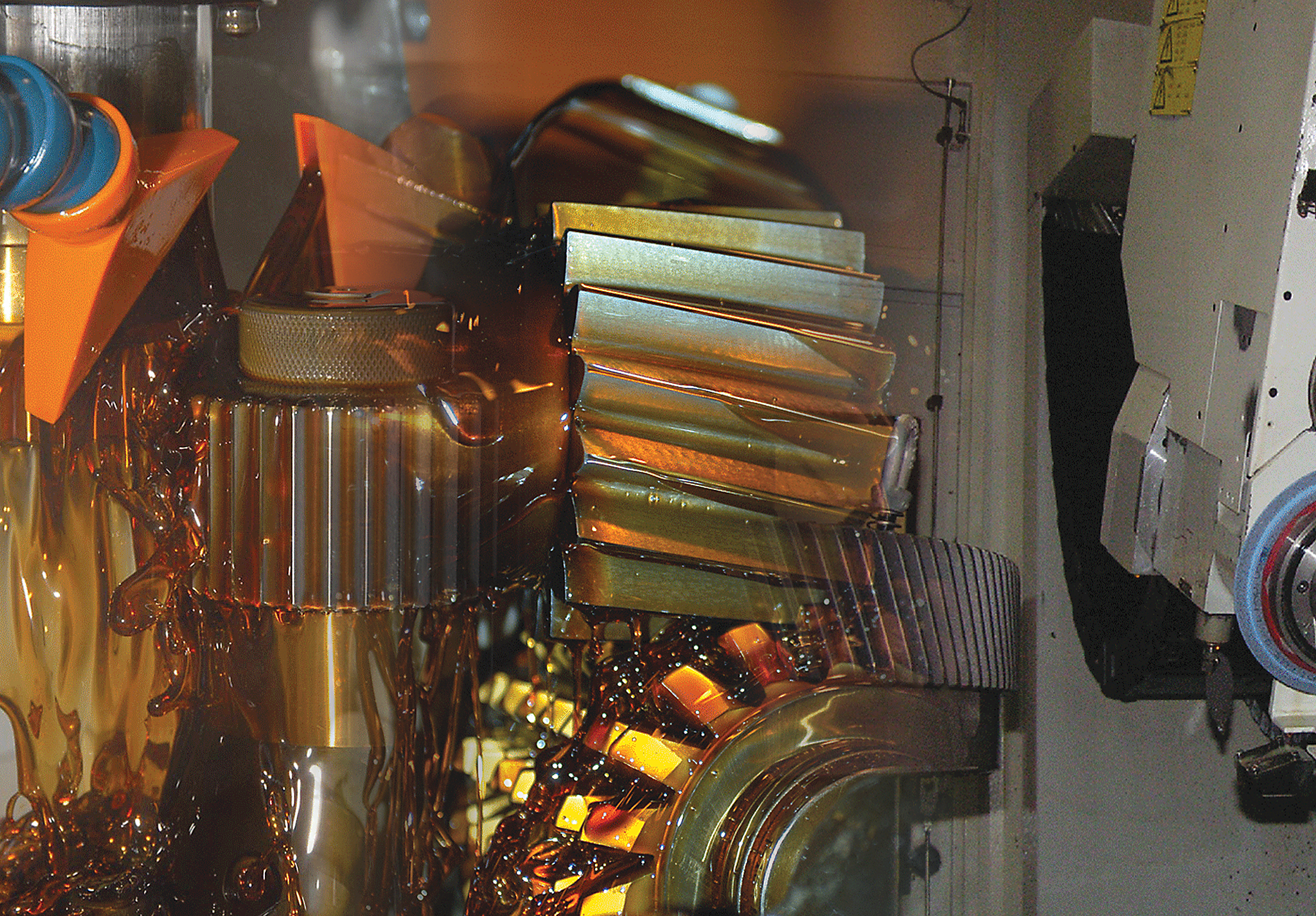 Equally qualified is Peiffer, who led the shop floor controls side of Bourn & Koch prior to partnering with Flowers. Since both partners serviced machines throughout the world at hundreds of companies, these leaders have a vast knowledge of the mechanical and electrical aspects of machines and the highly specialized world of gear manufacturing.
Currently, MTB has a backlog of orders from many companies who are converting their mechanically gear-driven machines to CNC, and others who need control systems upgraded, called a recontrol. “The difficulty in this industry is that every machine is different,” said MTB’s sales manager Anne Miner. “Very few rebuilds or recontrols are exactly the same. Recently, for instance, we stood in front of a Pfauter P1501 and evaluated all five axes to determine how to reduce the drivetrain and understand the weights of components and inertia required. We have dedicated engineers–mechanical, electrical, and master mechanics–for each project. Each discipline works toward a better solution. Usually the mechanical engineer will sit next to the machine in the shop as the master mechanic disassembles it, measuring and evaluating every element. We look at rebuilding a machine like doing a restoration of a classic car, but with a new high-performance engine and chassis underneath the body. It’s like a puzzle: understanding every component by taking it apart and putting it back together for improved productivity.”

Miner went on to explain the exact science behind it. “To rebuild these machines, you have to know exactly how they work–down to the paint job,” said Miner. “If you don’t paint an older machine correctly, the paint will not adhere well and bubbling or flaking of the paint will occur. The durability and strength of old carcasses is well-known, but the attention to detail, even to the coatings applied, is what makes them great platforms for a rebuild.”
Such attention to detail is common practice at MTB. Nothing is left untouched. Every original component reused in the machine is inspected, then repaired or replaced if required. Instead of new brake lines, MTB install custom-made hydraulic lines. For the electrical systems, they install all new wiring throughout the machine. Drivetrains are shortened for efficiency and accuracy. Finally, a new CNC engine is installed and tuned to give peak performance to the customer’s new machine. 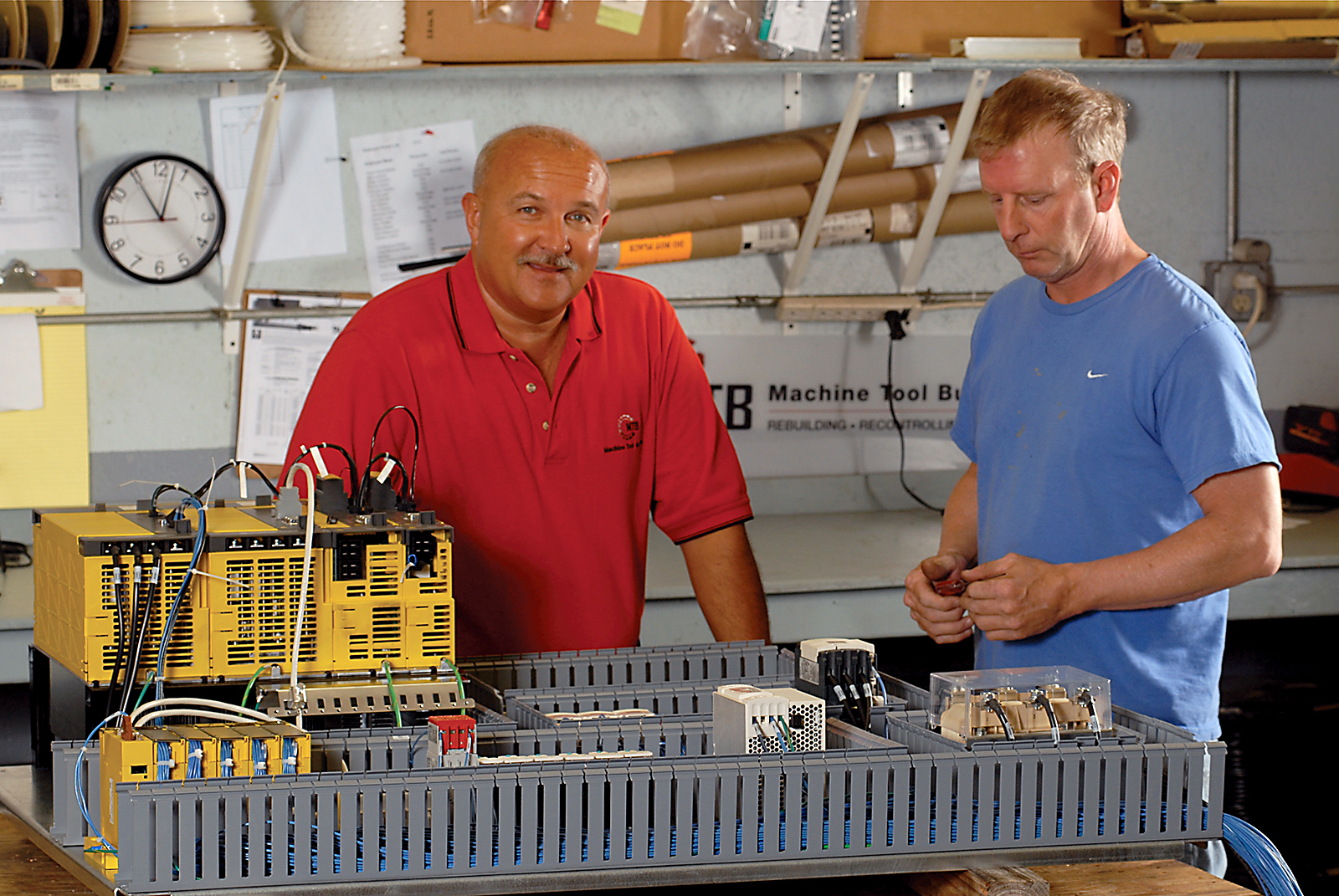 Rebuilds can include a complete conversion from change gear to CNC, or just maintaining a machine as-is. Oddly enough, there are companies who want just that. “Why? I’m not sure,” said Miner. “Some people just don’t want to change to CNC.”
Typically, 98% of their machine orders are from large companies in aerospace, mining, and heavy equipment. Currently on MTB’s floor, they are converting four mechanical (gear-driven) machines to CNC. They have a Fellows 36-6 shaper, a Pfauter P900 hobber, a Pfauter P900 Turbo hobber, and a Pfauter P1501 hobber. Many others are waiting in line, but there is limited floor space and engineers for this endeavor. Other projects include a Lorenz shaper being partially rebuilt and recontrolled, a Kapp VAS 432 Grinder being recontrolled and redesigned with an onboard dresser, and a Liebherr LC-152 being recontrolled, rewired, and all slides mechanically repaired. Many other projects are recontrols or in-field rebuilds. MTB is just completing a partial rebuild in the field of a large Schiess horizontal hobber approximately 40′ in length, an arduous process that took a team of ten people in the field. 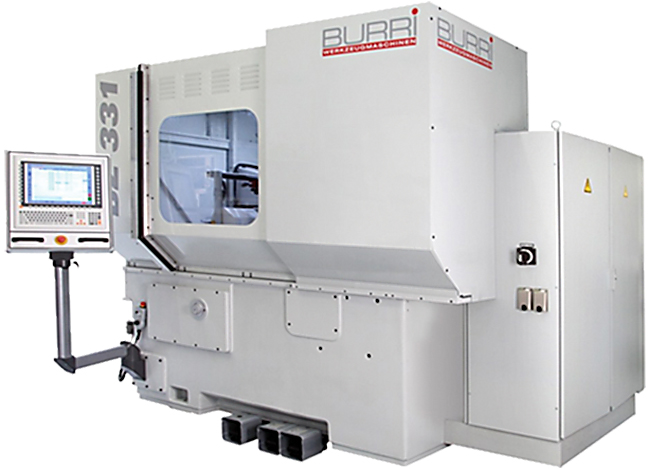 Regarding recontrols, MTB’s engineering team designs a “recontrol kit,” which consists of CNC control, motors, cabling, scales, electrical cabinet, and other components. When the kit is complete, it’s shipped to the customer where the machine electrical modifications are handled. The machine is down for three to four weeks to complete the recontrol, an efficient method to maintain production.
As a technology-driven company, the staff of MTB offers a wide array of experience in mechanical and electrical engineering, electronic controls, and software design. This knowledge is coupled with an eye for innovation and a genuine desire to provide quality service. 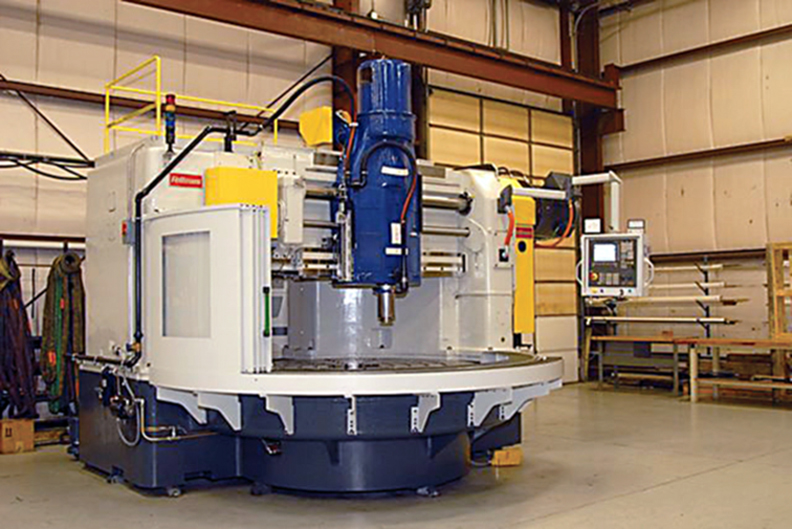 MTB has increased their manufacturing space by 20,100 sq. ft. to accommodate the demand for rebuilding and recontrolling additional machines. They’ve also taken on a grinding line from Germany, launched at Gear Expo, called Burri. “It’s a CNC continuous generating grinding line built on the mechanical basis of Reishauer. These Burri grinders are completely designed and built at Burri’s facility in Villingendorf Germany,” said Miner. “At MTB, every day is a new challenge. As OEM builders merge, bifurcate, and close their doors, companies who own their machines need solutions, and MTB provides that.”
MORE INFO  www.machinetoolbuilders.com

For Marine City, Michigan gear manufacturer Riverside Spline and Gear (RSG), growth as a company comes from pairing its knowledge and experience with highly efficient, technologically advanced machine technology. To that end, the company has invested $5.5 million in expansion, training, and equipment.
While considering the purchase of a gear hobbing machine, RSG weighed its options carefully to identify equipment that would satisfy its core quality and efficiency standards. As part of the search, the company weighed whether to purchase a new or remanufactured machine.
The search yielded the purchase of a remanufactured Modul ZFWZ 800 hobbing machine with four axes and one spindle under CNC control from Machine Tool Builders (MTB) at GearExpo 2011. This machine looked new and offered the technological advances of a new hobber for approximately half the price. Beneath its guarding exposed the combination of new and rebuilt components built on aged casting.

This machine was originally a fully-mechanical machine with change gears for the index and differential, equipped with unreliable controls. MTB performed a complete machine remanufacture and conversion to four axes and one spindle under CNC control. All the mechanical change gears were removed; all gearboxes, extraneous drive shafts, pulleys, motors, etc. were removed. The axes drive mechanisms were redesigned to adapt servomotors as close as possible to the driving screws.
When the machine arrived at the MTB facility, it had been out of service for a number of years and was in poor condition.

The remanufacture process took approximately 10 months to complete and went through many different phases. The machine was totally disassembled and thoroughly cleaned. All the guideways were refinished and the machine alignments checked per the DIN ISO 6545 acceptance criteria for gear hobbing machines. All parts required inspection for tolerance, wear, and feasibility of reuse. Each sub-assembly of the machines was disassembled, cleaned, inspected, and rebuilt back to the OEM specifications. All bearings and seals were replaced, bearing surfaces re-scraped, and way covers, wipers, and bellows replaced. New ballscrews were installed, the drive trains were shortened and changed to reduce as much lash as possible, and internal gear train modifications were made to simplify and improve the designs.
All the major assemblies were rebuilt off the machine. Once placed on the machine, they had to be checked for accuracy and fit on the machine itself. Each major assembly was installed and tested to verify its functionality.
A new hydraulic and lubrication system was installed on the machine. All the fluid and pneumatic hoses were replaced, many pipes were replaced, and all the lubrication metering valves and blocks were replaced. All the fluid power controls such as valves, pressure and flow regulators, flow and pressure feedback devices, etc. were replaced. Once fully assembled, the machine was setup and prepared to hob the first test pieces. Test cutting was done on a variety of parts, both left and right hand, in order to verify that the machine was accurate and capable of holding the workpiece tolerances. As the machine neared completion, all the guarding and safety devices were installed and tested. An entirely new electrical enclosure was designed and manufactured. A new Fanuc 0i-D CNC with Fanuc Alpha HVi series drives and motors were installed on the machine, and standard conversational programs were loaded to make the data entry process easier for the operator.

According to Dick, the Modul hobber more than doubled the capacity of older or comparison machines, allowing RSG to increase throughput. The largest gear hobbed on the Modul is 32 inches, though RSG’s largest gear processing capability is 39 inches.
“There is stability in old material,” said Curtis Dick, director of quality for Riverside, “as its casting offers a rigid platform for the machines. As a gear manufacturer, the benefits of this machine have out-performed RSG’s expectations. The latest Fanuc Controls System using MTB’s conversational software is user-friendly and allows for hundreds of part recipes while achieving an AGMA quality level 10 gear.” 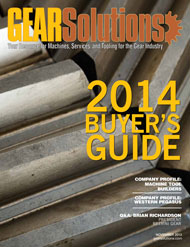