S.M. “Jack” Marathe, the president of Universal Technical Systems, Inc., isn’t exactly modest when he talks about the power and usefulness of his company’s Integrated Gear Software (IGS). “It’s a complete design and manufacturing environment for gears and gear sets,” he says. “IGS will take an OEM or a gear shop completely through the process–design, tooling, inspection, testing, and tolerance analysis. It’s all that a gear designer and manufacturer needs.”

Marathe isn’t shy about pointing out his reasons for making such a bold statement, either. “Look, we’ve been at this for 20 years,” he says. “Twenty years of creating and refining gear software, working with gear people, getting their input, hearing what they need, and building it into the software. Companies like Boeing, Ford, GE, and GM are using our software and trust it. This is gear software by engineers, for engineers. By using it, many of our customers have been able to reduce noise, increase life, and lower costs.”

During those two decades, UTS developed a total of 83 different gear programs, ranging from a first-response gear design and analysis program, to over-the-pin calculation programs, to sophisticated expert systems. So there is some justification when UTS refers to IGS as “the premier gear design and manufacturing software system in the industry.”

All these different programs come under one roof with Integrated Gear Software, but the company stresses that it’s about more than simply pulling software together. The word they use is “transformation,” and their customers back them up.

“The thing I like best about the new software is not its functionality, ease of use, or reporting, etc., though all those things are great,” says Lee Watson, engineering specialist with Ryobi Technologies in Pickens, South Carolina. “The thing I like best is the fact that UTS has put out a new product that attempts to help users design gear sets.”

From the beginning, the goal was to make IGS an expert system that was much easier to use, Marathe says. “It makes calculation not just faster, but smarter. It provides data entry sequences and messages to guide the whole process. More than using it to design gears, engineers can use the software to learn about gear design by playing around with it. We have invested more than 15 man-years in upgrading to this latest release of the product.” 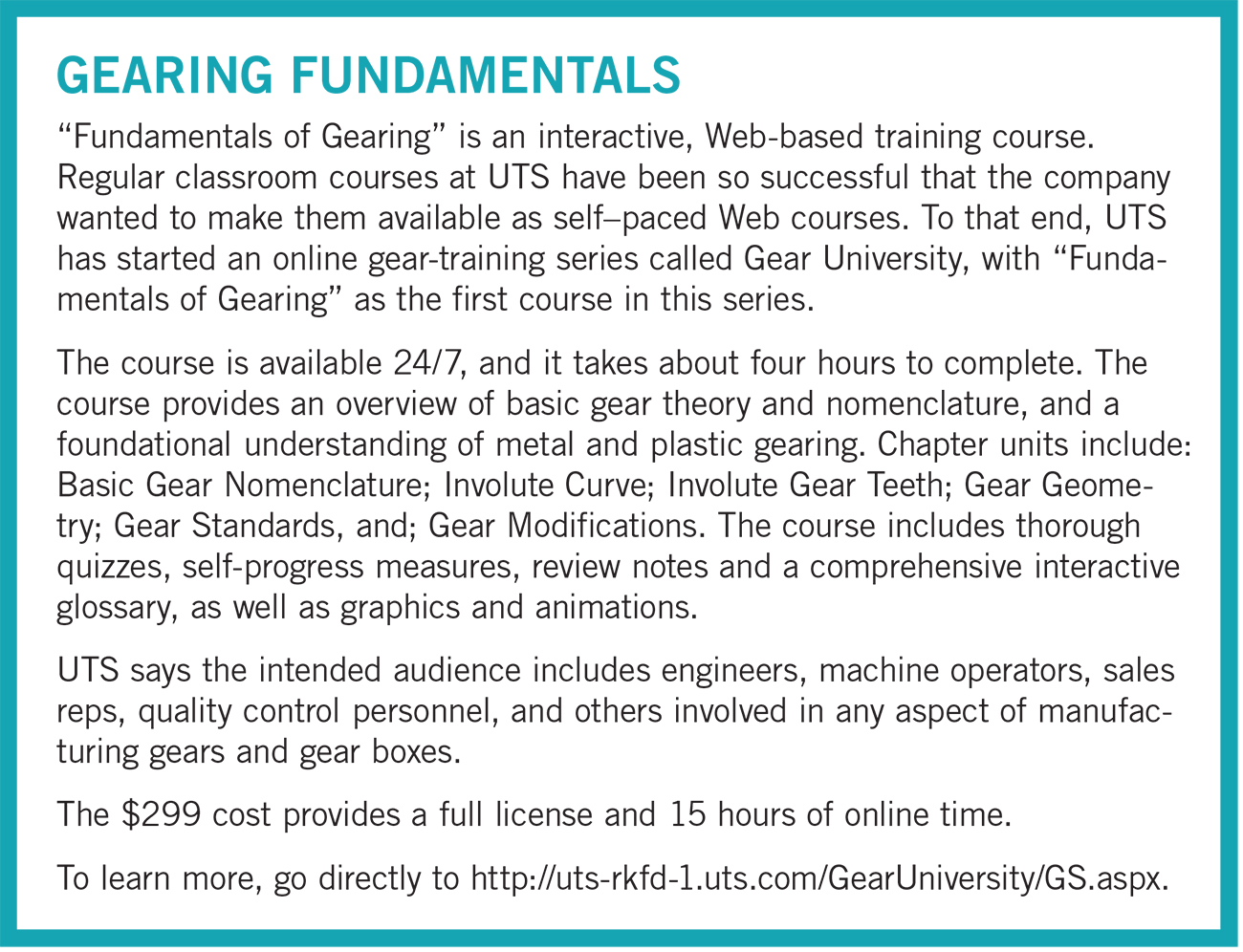 The metal gears basic package covers design and analysis, preliminary sizing, tooth thickness and coordinates, mesh geometry, profile shift coefficients, stress and life analysis, and measurement over pins. The plastic gear basic package does all of that and adds programs that cover such factors as temperature, moisture, and mold design. The advanced package covers such issues as specific types of hobs and cutters, yield stress, involute geometry, scoring analysis, tip relief, and even minimum-weight gearbox.

Apart from the completeness of the various programs, UTS is most proud of the way it all hangs together in IGS. The system passes data back and forth among the different programs, does tolerance analyses, and produces both standard and customized reports. It also organizes designs horizontally, by programs, and vertically, by project. “You begin with initial sizing, proceed to detailed gear design and analysis for metal or plastic gears, model the environmental extremes, do a full optimization with tolerance analyses, generate manufacturing specifications and mold coordinates, and finish with a complete set of reports,” Marsch says.

The first screen you see is a multi-pane affair with a menu window on the left, a toolbar across the top, and a larger window on the right that isn’t activated until you actually pick a package from the menu tree. Doing so calls up an attractive, informative, hub-and-spoke diagram that shows how all the programs in the package are related. (See Figure 1)

When you select a program, text appears in the right-hand window describing in detail what the program does. Sooner or later, you may end up learning the number coding of the programs. The opening screen also has a window for bringing in data from already-completed work. You fill in a checkbox, and another hierarchal menu tree appears, showing what’s available.

You also choose the project you’re working in from a list on the opening form. If you’re just starting a project, you create it by clicking a toolbar button, then giving it a name on the form that appears. This name is then added to the list.

On the opening screen, you also pick one of two input methods — “wizard,” and “power user.” Wizard is intended to be a structured, sequential input method for users of all levels of expertise, while the power-user form is just that — for experienced designers who want to tweak or optimize a design by switching input and output values. This opening sequence represents UTS’s assumption that a user will come into the application to make a new design.

If you want to open an existing design, click a toolbar button — or the keystroke “control-O” — and a different screen appears, with its own menus and the program descriptions. The data input forms range from simple to very complex, depending on which program is used–the latter being complex because they have to be, as experienced gear people know. The wizard form steps you from one input field to another: you enter the inputs you want and IGS then solves it, notifying you that it has done so. It will also notify you of any appropriate cautions and warnings, with the goal of guiding you through the design process. (See Figure 2)

On the power-user form, there’s an input field and output field for each variable in the program. Again, you enter the inputs you wish and solve, then read the output values directly on the form. (See Figure 3)

Some forms have additional tabs for configuring plots, filling in data tables, and, depending on the program, other specific calculations. For the more-complex programs, it’s worthwhile to look at the documentation — available in hardcopy and Adobe PDF format — and try one or more of the examples.

Choosing the power-user form lets a user “backsolve,” a feature of IGS’s calculation engine known as the “TK Solver.” Backsolving is really reverse engineering: you can solve forward or backward, with whatever combination of inputs and outputs you want. It’s handy for optimizing and testing “what if?” scenarios.

Many programs have standard report formats, and all programs allow custom reports, with inputs, outputs, and plots that you choose, plus headers and footers, and even a logo. Available plots include teeth in mesh, hob geometry, life data, and stress data (shown below). IGS also supports comparative reports that pull in data from two or more saved runs. (See Figure 4 and Figure 5 .)

If all of this sounds complicated, it is, but not unnecessarily so. The architecture of IGS is logical and comprehensible enough, and certainly reflects the real world of project management.

Jim Marsch used the UTS software as a gear engineer for Harnischfeger, where he worked for 22 years, and now uses it for gear consultation at UTS. “For a longtime user like me, the versatility of the UTS gear software had both pros and cons,” he says. “As opposed to a big, all-inclusive program — which is never really all-inclusive — the UTS modular approach let you take one piece of a project at a time.”

But there was a downside, Marsch adds. “For a big project, you had to enter data several times, and cut-and-paste to make reports. The new software preserves the modularity, but all the data is kept in one database and can be brought into any program. The enhanced reports are a great time-saver, and the comparative reports are a much, much bigger time-saver.”

Marsch says he uses the wizard only for initial data entry. For designing gears, he prefers the power-user form.

“Accuracy and speed were greatly improved by the ‘Get Data From Another Model’ feature,” Ryobi’s Watson says. “We also like the ability to locate the manual with a click of the mouse, and the ability to review designs in a true side-by-side comparison with the reporting feature.”

Tom Pijaca, technical manager of Smiths Aerospace in Whippany, New Jersey, says that his company particularly likes the visual plots of the UTS software — and the fact that there are programs for designing worm gears.

“The UTS software helps us produce predictable gear sets,” he says. “And because we can use it to validate tooling, we can lower costs by using existing tooling.” James Blalock, a project engineer for Parker Hannifin’s Chelsea Products Division in Olive Branch, Mississippi, praises IGS for its usefulness in training. “The graphical interface allows the gear designer to actually visualize what information the software is prompting the designer for,” he says. “This will be extremely valuable in guiding the less-experienced gear designer. If they do make a mistake, or want to modify some input value, the interface makes it very easy to retrace their steps, change the desired value, update the output, and see how the change affected the final gear set.”

Blalock also predicts IGS will fill an important need for companies in an era of greater employee mobility. Most companies, he says, have a long-standing employee who is the repository of gear knowledge.

“When the ‘gear expert’ leaves, what happens?” he says. “Hopefully, that’s where the software comes into play. The wise company will train other ‘gear experts’ before it’s too late, and the latest version of UTS can only help in that training. The time and investment required to get someone competent in using Integrated Gear Software has to be a lot less than any homemade gear software that I’ve seen.”

UTS has also produced an online training course that can stand alone, but that also supplements and corresponds with IGS. “Fundamentals of Gearing” is the first course in UTS’s projected Web-based “Gear University” training series. The course is aimed at experienced engineers who are new to the gearing industry, and toward experienced operators who want to become more familiar with gearing theory and nomenclature. The course includes curriculum provided by qualified instructors, and multimedia provided by designers whose first priority is effective teaching.

Cutting Out the Whining