Relative to gear hobbing, shaving, and/or post heat-treat grinding to generate accurate tooth morphology there may come a time wherein vibratory deburring is a requirement to remove adherent burrs.

What are the advantages and disadvantages of generic deburring as opposed to chemically accelerated vibratory finishing (CAVF), and why would you consider one option compared to the other?

Generic deburring requires the use of an abrasive ceramic media in a vibratory unit, either vibratory bowl or tub. The ceramic media contains abrasive grit — typically, aluminum oxide — which acts like a piece of sandpaper to mechanically abrade away edge burrs.

By changing the ratio of ceramic binder — typically clay, sand, and feldspar — to aluminum oxide grit or by changing the grit grade (80 grit vs. 400 grit, for example) the media manufacturer can create a plethora of abrasive ceramic media compositions having assorted cutting characteristics.

If you have ever examined sales literature for abrasive media, you will note that a media blend is described in euphemistic terms such as “provides an acceptable pre-plate condition,” or “a moderately aggressive blend that results in short processing time.” Truth be told, abrasive ceramic media has a rate of decomposition known as the attrition rate. Attrition releases the abrasive grit into the media and parts mass such that the abrasive is free to deburr the gear. Effectively, you are tumbling the gears in sandpaper.

Nowhere in media literature will the media manufacturer advise you of the media’s attrition rate. Obviously, to make an aggressive media blend the manufacturer will increase the ratio of abrasive grit vs. ceramic binder. With less binder to hold the media together, such a blend will have a high attrition rate. Parts will be deburred rapidly but likewise, a high media attrition rate will result in a rapid reduction in media size and a proportional increase in media sludge clogging drain tubing and sumps. A media carefully chosen; not to be a lodging problem, will rapidly attrit and lodge in the workpieces. 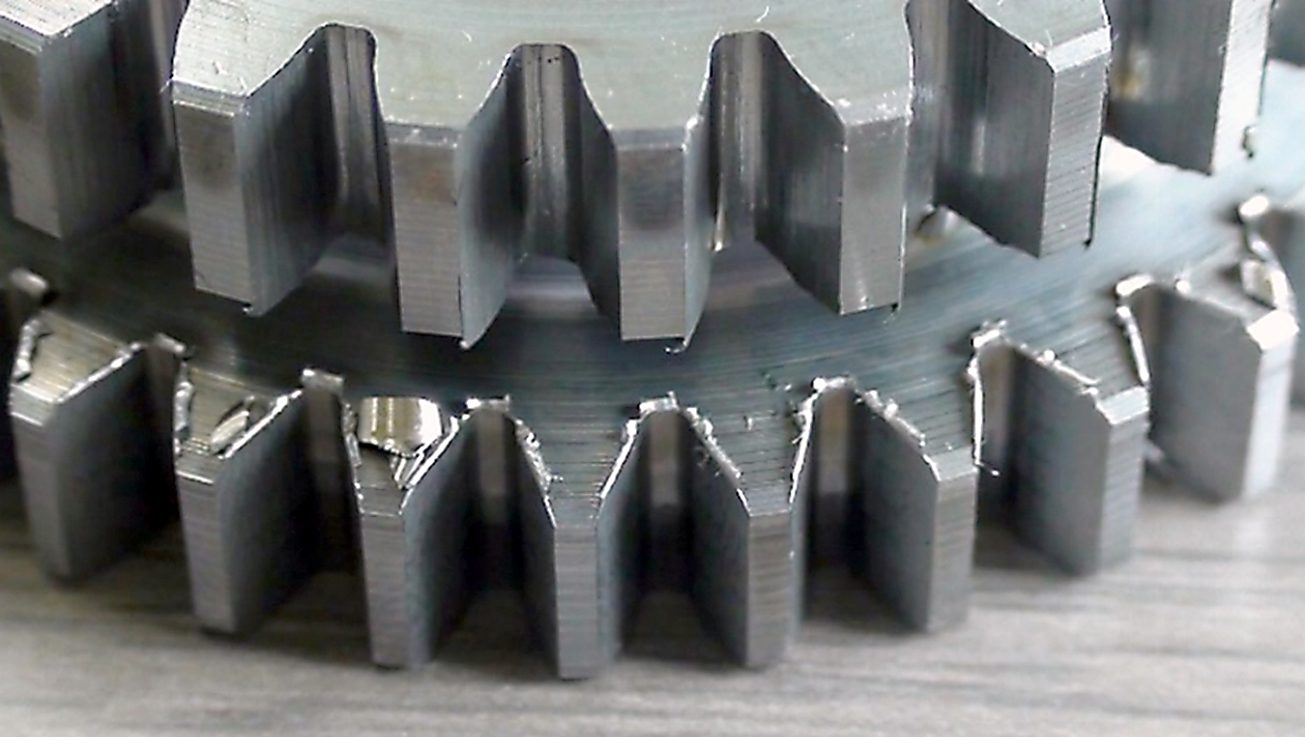 Below is detailed a table that reviews the compositions, densities, and attrition rates of common generic abrasive ceramic media blends and HDNA media. Such a table is useful when deciding on the correct media composition for the task.

A quick review of the tabulated data shows that by choosing a heavily abrasive media such as a 40-blend, that in just one hour of vibratory time, you will generate 20 pounds of swarf — sludge that will go down the bowl’s drain. This swarf will rapidly fill trenches and/or sumps thereby requiring periodic maintenance to shovel-out the sludge or unclog-transfer pumps. Processing time will be rapid as there is significant abrasive to bring to task, but at what cost due to sludge generation and a rapid decrease in media size and overall bowl volume? Such a media choice, if used on an 8-hour per day production schedule, will require the daily addition of five each, 50-pound boxes of new media for replenishment.

When using a chemical accelerator in the vibratory bowl, you have the distinct advantage of reverting to an HDNA media.

The high-density, non-abrasive media is 100 percent aluminum oxide in composition but has been kiln-fired at such a high temperature that the aluminum oxide is vitrified and loses all mechanical cutting characteristics. This seems to make no sense when we consider the methodology of mechanical abrasion as being the course required to achieve part deburring. So how does CAVF work to successfully deburr a gear?

During CAVF, gears are placed into the vibratory bowl with an HDNA media of the correct morphological size and shape to deburr the locations of concern on the gear. A peristaltic pump operates continuously during the vibratory run time to introduce to the mass a small flow rate of an alloy-specific CAVF chemistry. The chemistry reacts with the part’s surface to form a soft conversion coating. The coating is typically one mono-molecular layer thick, but compared to the Rc 60 – 65 gear-hardened gear it has formed, it is incredibly soft and sacrificial. The vibe bowl operator can now use the weight density of the HDNA media to wipe away the soft conversion coating, expose clean steel beneath, and allow the coating to reform. With each pass of media, the coating is wiped and reformed. During the processing cycle, this wiping-and-reforming action recurs thousands-upon-thousands of times. Each wipe removes a layer of steel and eventually weakens and removes the burr.

CAVF permits the use of HDNA media. This greatly reduces swarf generation, which has a positive consequence on the virtual elimination of sludge removal from trenches and floor sumps. Since HDNA media has such a low attrition rate, it will maintain its shape and size for a much longer period. This, of course, greatly reduces the concern that the resultant smaller media size will become a lodging problem. Additionally, on a daily basis, topping-off of the media level in the machine can be relegated to a bi-weekly or even monthly chore. Finally, HDNA media will reduce the risk of edge over-radiusing.