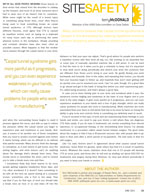 We’ve all seen people wearing those braces on their wrists that extend from the knuckles to midway up the forearm, and most of us know someone who’s had to wear one—if we haven’t had to, ourselves. While some might be the result of a tennis injury or something along those lines, most often they’re being used to treat something known as carpal tunnel syndrome, or CTS. Although doctors have different theories, most agree that CTS is caused by repetitive motion such as typing on a keyboard for many hours each day or performing the same physical motion in the workplace. Steady pounding and constant vibration have also been cited as possible causes. What happens is that the median nerve passes through the carpal tunnel in your wrist, and when the surrounding tissue begins to swell it presses against the nerve, and with no way to relieve the pressure within the carpal tunnel you begin to experience pain and numbness in your hands. And, yes, it seems to be another one of those complaints that you need to protect yourself against even before it starts hurting, which can be difficult to do without that painful reminder. Many doctors think the damage is cumulative, so it just seems to get worse once the aching begins, and wrist braces can’t do anything about the damage that’s already been done. They mostly serve to immobilize the wrist—and to remind you to take a break every now and then.

I sometimes think that there seems to be more people getting migraine headaches these days, and I’ve often wondered if it doesn’t have something to do with all the time we spend staring at a computer screen, sometimes only a foot or two away. They say that if you do that type of work you should take a break once an hour or so and stare off into the distance so that your eyes can adjust. That’s good advice for people who perform a repetitive motion with their wrist all day, too, like working on an assembly line or some type of manually operated machine like a drill press. It can be hard to find the time to do it when you’ve got a schedule to keep, but it’s important to stop what you’re doing periodically and stretch your wrist into positions that are different from those you’re doing in your work. By gently flexing your wrist backwards and forwards, then to the sides, and repeating that motion, you should feel your muscles begin to limber up, and hopefully they won’t start getting stiff as quickly once you’ve resumed your work. Like I’ve said, though, it’s a good idea to go ahead and get in the habit of doing this before you start experiencing pain. It’s called being proactive, and that’s always a good idea.

In case you’ve been feeling pain in your wrist and wondered what it was, the symptoms involve tingling and numbness at the base of your fingers and in your wrist in the early stages. It gets more painful as it progresses, and you can even experience weakness in your hands and a loss of grip strength, which can really cause problems for people who work in manufacturing. While machines are more automated than ever, there is still plenty that has to be done by hand, so losing the ability to grip tools and controls firmly is something you definitely want to avoid.

If you’re involved in this type of work and are experiencing these feelings in your hands and wrists, you need to pay your doctor a visit where they can diagnose CTS fairly easily. If you do have it treatments can involve everything from steroid injections, to occupational therapy, to the immobilizing wrist braces I’ve already mentioned, to a procedure called carpal tunnel release surgery. The good news about the surgery is that it has a 90-percent success rate, with people able to go back to their jobs after a short period of recuperation. The bad news is that it’s still surgery.

Like I’ve said, doctors aren’t in agreement about what causes carpal tunnel syndrome. Some think it’s genetic, while others feel that it’s a result of repetitive motion. Whatever the cause, statistics show that one in 10 people will develop CTS at some point, and those who do will end up shelling out about $30,000 for treatments and surgery during their lifetimes. So stop and stretch periodically if you want to keep your hands in motion.