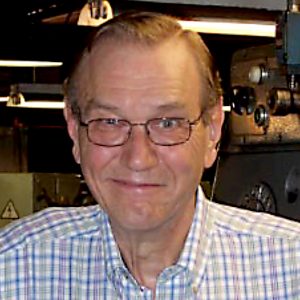 GS: This year marks your company’s 60th anniversary. Tell us about its founding.
ES: My father was an engineer who worked at aircraft plants all around the country during World War II, for companies like Wright Aeronautical, where he was a superintendent overseeing the efforts of men involved in engine design. After the war he found himself in California, and after he’d experienced his first earthquake he said “to hell with this, I’m going to Texas!” So he worked in El Paso for awhile, where he met my mother, and then they relocated to Dallas, where he started the company in 1947 in the garage in our back yard.

GS: Do you have any memory of that?
ES: Oh, yes. I was about five when he started the company, and I remember hanging around the garage watching my father work. He was always showing me how to do different things, and he made me wear safety goggles so that I wouldn’t get a hot metal chip in my eye. One would go down the back of my shirt every once in awhile, though, so I had to learn about that the hard way.

GS: How long was it before he moved out of the garage?
ES: After four years he bought some land near the house for a new building, and he was actually his own contractor. He had a big concrete slab poured, and then he cut his own steel for the rafters and welded them in place himself. It’s a good, solid building, about 6,000 square feet, and we’re still in it today. We’ll probably have to expand at some point since we’ve invested in so much CNC equipment, but we’ll always hold onto this building, if only to house all of our old manual machines. You can always find a use for them.

GS: So you’ve been with the company your entire career?
ES: Yes, I have. Like I said, I grew up watching my father, sweeping up the shop floor and cleaning out the machines. And when I was younger I had a small lathe that I played around with, learning how to make different things. Eventually I learned how to run the larger machines, and to read blueprints and quote jobs. So I’ve been with the company my whole life, and I’ve learned every aspect of the business. It’s something that just gets in your blood, and you learn how to do things without even realizing it. As a matter of fact, sometimes I’ll pull a formula right out of my head, and people will say “where did you learn that?” Well, I don’t really know for sure. There are just so many things you pick up over the years.

GS: I understand that your own son has joined the company, as well.
ES: That’s right. He studied mechanical engineering at the University of Texas in Arlington, and now he’s working here with me. I told him that he could do whatever he wanted to, that there wasn’t any pressure for him to join the company, but I guess it’s something that’s gotten into his blood, too. So he’s the third generation of Steiners to be in the family business. My father went by Ed, I’ve always been called Eddie, and everybody knows my son as Edward, just so we don’t get mixed up. But he’s interested in building up the business, just like I’ve always been, but we also want to stick to my father’s commitment to doing quality work at a fair price, while also maintaining a good relationship with our customers and suppliers. We manufacture precision and commercial gears at a competitive price, and even though we’ve grown to the point that we have customers located all across the country, we still have our very first customer. And after 60 years, that’s really saying something.