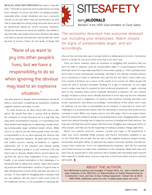 We’ve all dealt with employees who have a “bad attitude.” You’d like to weed out such people before you bring them onboard, of course, but that’s not always possible, especially when certain situations can sour a person’s outlook on life and affect their job performance as well. This is especially true during trying times like those we’ve all experienced during the recent economic downturn. People are stressed out about job stability, their ability to pay their bills, and maybe their home situation has taken a hit when a spouse has lost their own job with the resulting loss of income. These are the kinds of things that can drive anyone to despair, and something we should all keep in mind when considering an employee’s suddenly negative behavior and state of mind.

So what should we do when faced with such a situation? We should first take a serious look at whether the employee is merely stressed out in a way that may pass when circumstances improve, or if something more deep-seated and dangerous is happening, usually involving unreasonable anger exhibited toward others. While none of us want to pry into other people’s lives, we have a responsibility to do so when ignoring the obvious may lead to an explosive situation. Sit down with the person and exhibit concern, leaving accusations or negative statements out of the equation and instead asking whether anything is going on in your employee’s life that they’d care to discuss. Maybe they’re worried about losing their job, and a clear explanation of the company’s health, or an honest description of the challenges it is facing will help to dispel their anxiety. Quite often providing someone with information, whether it’s good news or bad, will allow them to fend off the fear that can arise in a vacuum. Or they might be struggling with a situation that you can address, like the need to work more hours for the additional income, or the possibility of exploring flex time so they can help take care of young children or ailing parents at home. Sometimes there’s a simple fix, but you’ll never know that if you don’t ask.

There are times, however, when an employee is struggling with problems that you won’t be able to address, such as unreasonable anger or a psychological condition, and that’s when it’s especially important to know what’s going on. That’s probably when you’ll need to seek professional counseling, referring to the internal company policies you’ve developed in order to determine who will foot the bill, which could create even more anxiety if finances are a piece of the puzzle to be sorted out. Many people will resist the idea of seeing a therapist, thinking it’s a sign of weakness, so you might need to make clear that it’s required for their continued employment — again, referring back to the company policy you’ve hopefully developed in advance. Be very careful, though, because a person who’s already disturbed in some way may become offended or confused by such a suggestion, so observe their reactions carefully and tailor your words, expressions, and delivery accordingly. Conversations of this nature aren’t easy for anybody, but you have a responsibility as an employer or supervisor to meet such challenges in a professional manner with the well-being of everyone who works at your company in mind. While your inquiry may be met with anger, there’s an equal chance they’ll be relieved to finally be acting on something they’ve been struggling with for quite some time without knowing how to begin the process of dealing with their demons. You may even find that they weren’t aware that their inner struggles were having an effect on other people, and that can be the beginning of making a positive change right there.

Before you confront someone, however, consult your legal or HR department to make sure you’re handling things properly, and there’s information available to you on the OSHA Web site as well. But the fact is that negative behaviors impact morale, productivity, and plant safety, so approach the subject seriously, tactfully, and with the respect that it deserves. You’re not stigmatizing this employee, after all, but reaching out to them because you value their contribution to the enterprise. Make that clear, and view it as an opportunity to help someone who’s dealing with something that’s beyond their capacity to handle alone, and you may form a bond from which everyone involved will benefit.