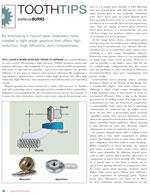 Still using a worm gear and trying to improve the overall efficiency of your system? Purchasing a high efficiency NEMA premium motor may improve efficiency only marginally if you pair it with an inefficient gearbox. The motor is only half the equation—you need to also improve the gearbox efficiency if you want to improve your system’s efficiency. By employing a hypoid gear, engineers have created a right angle gearbox that offers high reduction, high efficiency, and compactness that will increase your operating system.

Hypoid gearing has been around for a while, and you may be familiar with this technology that is commonly used in rearwheel drive automobiles. Engineers use hypoid gears for the rear wheel axis on cars for two reasons: (1) it moves the drive shaft down which creates more room in the passenger area and (2) it is simply more durable. A 1965 Mustang that uses hypoid gears will still operate with the same hypoid gear it was originally assembled with—that’s more than 45 years! Hypoid gears have specially formed teeth on a circular face that are driven by a worm-like drive on non-intersecting axes. They are similar to bevel gears, however, bevel gears intersect at a perpendicular axis and call for a larger size gearbox—which is why most of us default to a worm gearbox. (Figure 1)

As the image below shows, conventional spiral bevel gearing, has essentially a pure rolling, meshing action that is mechanically very efficient. But the drawback lies in its small total tooth contact area, resulting in a low torque throughput capacity. Reduction ratios greater than a 6:1 are not possible in single-stage spiral bevel gearing. However it may be possible to get higher ratios with the aid of multiple-stage configurations, but this comes with the problems of lower mechanical efficiency, increased backlash, more space consumption, and greater weight.

Conventional worm gearing, whose meshing position is shown at the bottom of the image, has a considerably higher total tooth contact area. Although it offers a high torque throughput and a high reduction ratio, it fares poorly in terms of mechanical efficiency. This is due to the friction generated by its sliding action. The high heat that is generated can raise the lubrication temperature to unacceptable levels when the box is operating continuously for industrial use. In reality, worm gears do not have a particularly good overload capability; rather, their thermal limitations cause them to be operated at loads below their mechanical limits, therefore being inefficient. Worm gearing is also affected by wear that demands regular adjustments in order to maintain accuracy.

In contrast, Hypoid Gears offer a rolling action along with a very small component of sliding action. The sliding action is what wears down the gear component and often leads to tooth breakage. When compared to bevel gearing, the hypoid gear shows a greater tooth contact area, which offers more durability. In addition, hypoid gears tend to offer quieter and smoother operations in comparison to spiral bevel gearing. The efficiency of a hypoid gear is less than a similar set of spiral bevel gearing (90-95% as compared to 99% for many spiral bevel gearing), however much higher than worm gears. Worm gear efficiency is quite dependent on operating speed. Typical worm gear efficiencies run from 50 to 90%.In most industries, power consumption in the manufacturing environment accounts for approximately 1/3 of all energy consumed annually within the United States. In the enclosed gearing industry, questions such as “how efficient is product X” are becoming increasingly common. As no mechanical device is 100% efficient, this numeric value of efficiency will always be less than 1. Several factors influence how efficiency is lost during operation of the gearbox system. (Table 1)

Two gears in mesh incur losses in efficiency due to the sliding action of one gear tooth against the corresponding gear tooth of the mating gear. This sliding action reduces the overall efficiency of the gearset since usable power is converted to heat. It is not accurate to say that a specific gear type has a definite efficiency associated with it, however some gear types typically operate at lower efficiencies than others. Efficiency, as it relates to enclosed gearing, is simply the ratio of the output power (power transmitted through the gearbox as usable work) to the input power. Below is an example from several worm gear manufacturers catalogs.