For half a century this company has been buying and selling all manner of gear-manufacturing equipment, building strong and lasting relationships along the way.

It’s one thing for a company to survive — and thrive — as a family owned business for half a century, but when two families are involved, that surely deserves a category all its own. Such is the case with Mohawk Machinery, though, which was founded by the Harpenau and Molloy families in 1956, and who still run the company to this day.

“It was basically started by two cousins, Bill Molloy and Wilbur Harpenau,” according to Joe Harpenau, the company’s president, who adds that Steve Molloy is vice president. “They’d been in the machine tool business together before that time, along with Bill Molloy’s mother, but then they bought a 5,000 square-foot facility and established Mohawk Machinery, which is named for the Indian tribe who once lived in the Ohio Valley area just outside of Cincinnati.”

Although the company still owns that original facility, it has since moved about 15 miles north, into a complex of three buildings totaling some 150,000 square feet of office and warehouse space for the machines it purchases for resale. The largest of those buildings, at 70,000 square feet, features two 25-ton gantry cranes — “that’s where we keep the big stuff,” Harpenau explains, “the 100,000-pound machines that aren’t so easy to move around”–and another 50,000 square-foot building has two 15-ton cranes and is heated. “We keep our CNC machines in there, since cold temperatures could damage the controls,” he says.

As for the types of equipment it stocks, anyone involved in any type of manufacturing should be able to find something interesting among the company’s vast inventory of some 2,000 machines. “Probably about a third of our business involves the gear-manufacturing industry,” Harpenau says, “and the rest of it runs the entire gamut, including fabricating, turning and milling equipment, you name it. From the beginning we’ve sort of taken the ‘supermarket’ approach, which really helps when one segment of the market is down. If the fabricating end of things is in a slump, the gear machinery may be on the rise, so we’ve found that diversification has really helped get through the various cycles you encounter in this business.”

Another thing Mohawk Machinery has encountered — and begun to rely on more heavily in recent years — is partnerships with other buyers and sellers who specialize in particular sectors of the market. “We really like what their expertise brings to the relationship,” Harpenau says, “so we’ve been expanding on that approach immensely.”

In terms of its approach to locating and identifying potential machine buys, the company relies on everything from auctions, to manufacturer’s surplus inventory, to government lists. And there’s quite a bit of traveling involved, too. “We have two guys who are on the road almost constantly, and another who spends about half of his time traveling,” Harpenau says. “And even though we have made deals overseas, most of our purchases are made here in the United States and in Canada.”

Equipment is shipped far beyond that area, however, with a great deal recently being sold into the Chinese market. “We’ve been doing a lot of containerizing and shipping to China, so that area has really opened up for us in the past couple of years.”

In addition to searching out the best machines for its customers, Mohawk Machinery also offers appraisals of existing equipment, including an innovative new “desktop appraisal” service. “We have three people who are certified appraisers — myself, Tim Walsh, and my brother, John — and we’re prepared to handle any type of request, whether that be auctions, fair-market value, or forced liquidations. We’ll travel to the site, spend as much time as we need evaluating the equipment, and then come back here and do our research before submitting the results,” Harpenau explains. “As for the desktop appraisals, customers can send us up to 10 machines, and for about $150 we’ll give them an idea of what it’s worth, which can be helpful in obtaining loans or just getting an idea of your current machine assets.”

As for Mohawk Machinery’s own assets, Harpenau counts his family as a central component. “In addition to John, my brother Mike also works here in general sales, and all of us grew up the next street over from Steve Molloy, so we’ve known each other forever,” he says. “But the important thing is that we all agree on the company’s basic philosophy, which has to do with honesty. When someone is interested in buying a piece of equipment from us, we’ll show the machine under power and then we’ll guarantee it. And if that machine doesn’t do what we promised it would, we’ll make it right … no questions asked.” 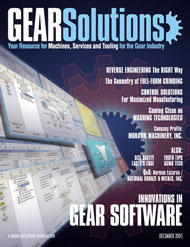