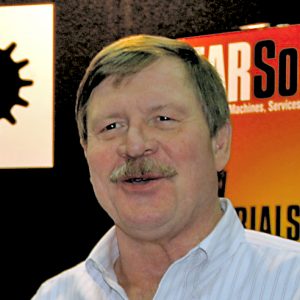 As an exhibitor, GEAR EXPO 2005 was a huge success for us. What have you heard from other exhibitors?

We had a meeting with many of them, and when I asked for a show of hands from those who’d had a positive experience, the response was unanimous. Everyone agreed that the move-in was flawless, and that has a lot to do with the attitudes of the union workers–the teamsters, riggers, carpenters, and electricians. It’s almost as though they’ve gone to charm school since the last time we were here in 2001. And Cobo’s management staff has been superb, always offering suggestions and quickly solving what few problems we did encounter.

As far as the economic impact that GEAR EXPO has had on Detroit, I know that local businesses got a boost from the show because many people who came stayed in downtown hotels, went out gambling in the casinos, and dined in many of the city’s fine restaurants. I know that the hospitality group sponsored by the Detroit Metro Convention & Visitors Bureau booked hundreds of dinner reservations. So that’s why I think that everyone’s expectations–mine, the exhibitors’, the visitors’, and even the local merchants’–were not only met, but they were easily surpassed.

Give us a little background on what it took to make this year’s show such a great experience.

When we started this mission to enhance GEAR EXPO in the spring of 2004–knowing that AGMA basically had to pull off a miracle because of the many complaints we had in Columbus in 2003 about poor attendance, and also because things had gone so poorly with the unions on our last visit to Detroit in 2001–the first person I called was Bob Baumgart, the general manager of Freeman’s Detroit office. He’s based right here in Cobo Center, and I knew he was the only guy who could pull off what we needed to happen concerning the union work rules. Bob is so well respected that he was able to help me in my efforts to get the unions to give our exhibitors meaningful concessions. Many of the union workers have been a little difficult to work with in the past, but this time around I’ve witnessed a degree of customer service that I’ve never seen at Cobo Center before. It’s the same Cobo, but with a whole new attitude.

There were a lot of new offerings this year, such as the Solutions Center. How did that come about?

In early 2004 we hired a consultant to evaluate the show. It was a completely unbiased research project, and we launched an extensive series of telephone interviews, focus groups, and a field survey directed at what visitors and exhibitors think GEAR EXPO should be. Out of that project came the educational opportunities that were available in the Solutions Center. Nearly 30 organizations gave presentations there, and some of them were standing room only. In addition, we presented the AGMA basic gear training course, and we also had the American Bearing Manufacturers Association, the Society of Manufacturing Engineers, the Forging Industry Association, and the Forging Defense Manufacturing Consortium conducting seminars on gear-related topics. In short, our visitors told us they wanted more educational opportunities connected to GEAR EXPO, so we gave it to them.

Can you give us a sense of the attendance numbers?
KM: Probably the best indicator is the number of guest passes that visitors have used to register free of charge. While overall attendance has been considerably above what we experienced in Columbus in 2003, the guest pass registrant category is a good way of gauging how many people were interested enough in the products and services on display to actually attend. We printed more than 20,000 guest passes for exhibitors to use to invite customers to the show, and the response has been absolutely outstanding. We’ve never had more than 600 or 700 guest pass registrants in the past, and this year we had well over 1,000. The fact is, everything I’d hoped would happen this year has, so we’re definitely looking forward to returning to Detroit in 2007 with an even bigger and better GEAR EXPO.

MORE INFORMATION  Kurt Medert’s responsibilities include the planning and oversight of GEAR EXPO. He can be reached at (703) 684-0211 or medert@agma.org. Visit online at www.agma.org. 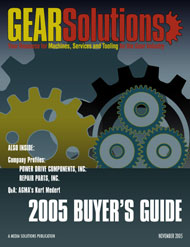