Over 114,000 on hand in Chicago as the manufacturing technology industry celebrates its 30th edition

The 30th edition of IMTS — The International Manufacturing Technology Show 2014 was the fourth largest IMTS in history and the largest six-day show ever with registration of 114,147 representing 112 countries. This was a 13.9 percent increase over IMTS 2012. IMTS covered more than 1.282 million net square feet of exhibit space and hosted 2,035 exhibiting companies. IMTS 2016 will be held at Chicago’s McCormick Place Sept. 12-17, 2016.

The application of additive manufacturing in a large-scale application stole the show. News of the world’s first 3D-printed car is still sweeping the nation from Chicago to Atlanta and from local stations to CNN. The Association for Manufacturing Technology (AMT), Local Motors, Oak Ridge National Laboratory, and Cincinnati, Inc., collaborated to 3D print and assemble the first-ever electric car onsite during the six days of IMTS. On Saturday, Sept. 13, Jay Rogers, CEO and Co-Founder, Local Motors and Douglas Woods, President, AMT, drove out of IMTS 2014 in the newly finished “Strati.” 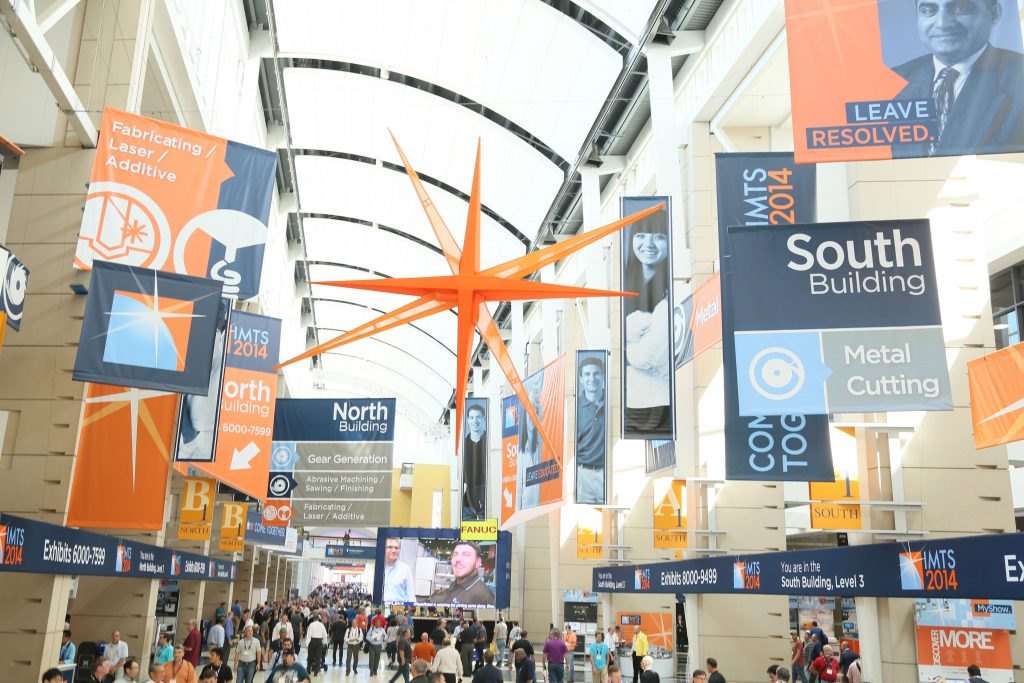 The process started with a design competition within the Local Motors community, for which 207 entries were submitted. The winner was Italian Michele Anoe with his ‘Strati’ design, meaning ‘layers’ in his native language.

Printing began at the start of IMTS and only took 44 hours to complete. Made of carbon-fiber reinforced polymer, the same plastic as Lego® products, the car was printed on a large-scale additive printer by Cincinnati, Inc. The wheels and hubcaps were also 3D printed using the direct metal process.

The result is an electric car that drives at a top speed of 40 mph and only consists of about 40 parts, versus 20,000 parts in a regular car. 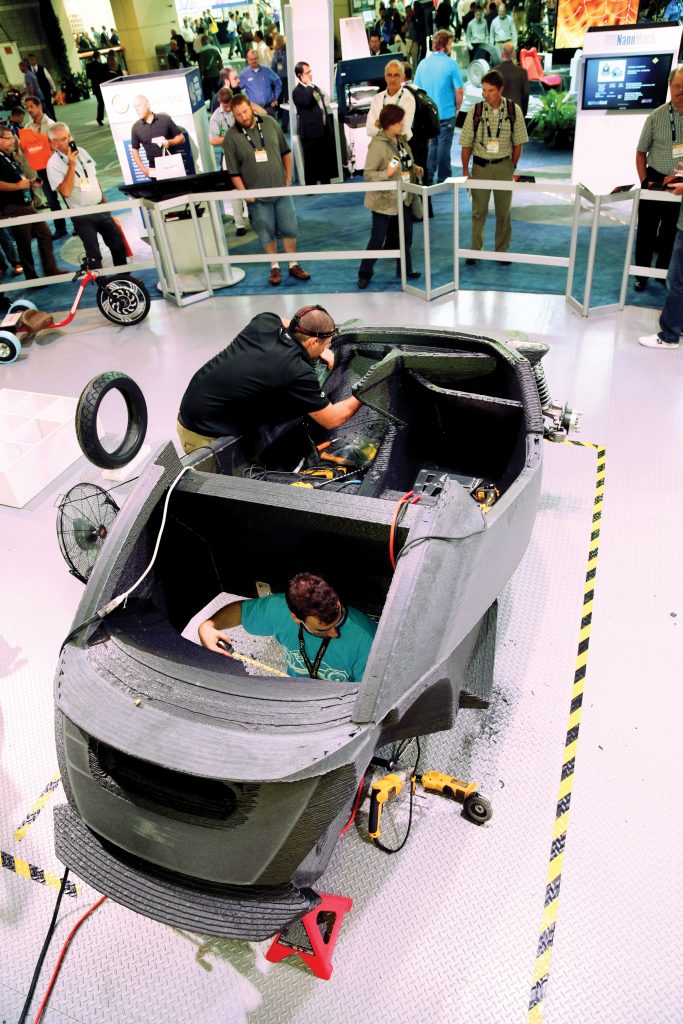 “During IMTS 2014, there was a universal vibe among exhibitors, visitors and even students, that manufacturing is now THE place to be,” said Peter Eelman, AMT Vice President – Exhibitions and Communications. “Media from all over the world covering the first-ever 3D-printed car build created this one-of-a-kind feel, and the entire community was caught up in the excitement.

“Even more exciting to exhibitors was the fact that customers came with buying intentions and a confidence that has not been seen in the manufacturing industry in many years. The evidence is clear in a capital spending survey released by Gardner Business Media Sept. 8, the opening day of the show, which predicts a 37 percent increase in metalcutting machine tool consumption in 2015.

“A major concern among manufacturers is building a community of workers to fill their needs now and in the future. At IMTS this was addressed beyond all expectations by the Smartforce Student Summit which more than doubled in attendance over IMTS 2012 and captured the imagination of young people with the truly innovative technologies on display. 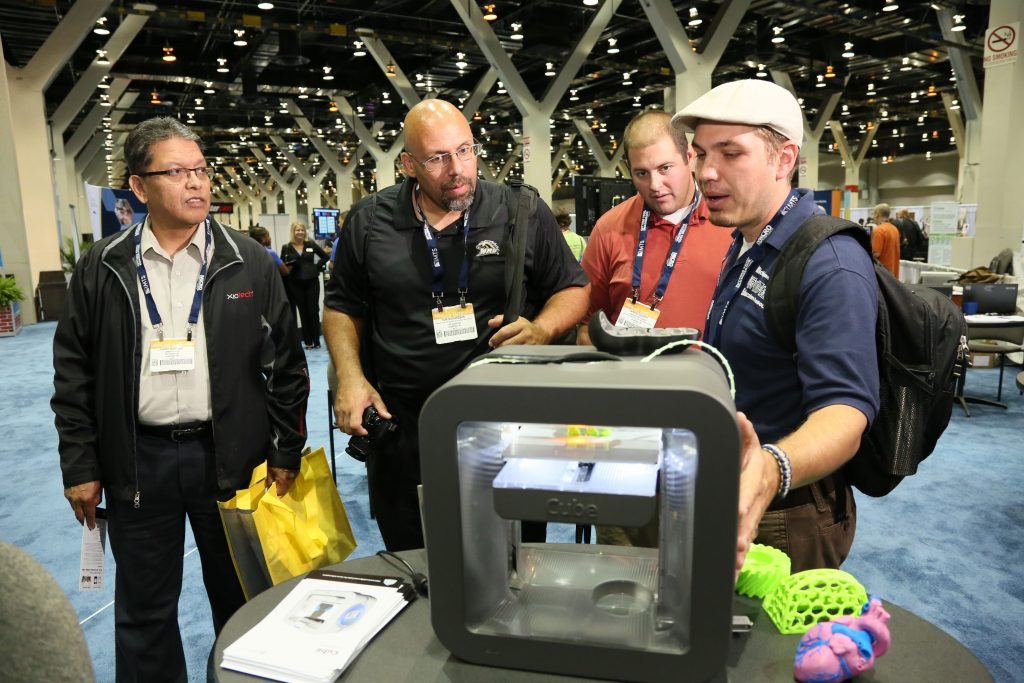 “The combination of the look of the show, the vibe of the participants, and the groundbreaking nature of the projects on the show floor truly defined our marketing campaign. The industry came together and left inspired.”

The show had a remarkable display of new and emerging technologies that will continue to revolutionize the manufacturing world. These innovations, including digital data integration, automation/robotics, in-line quality assurance additive manufacturing, and traditional equipment, offer solutions to all manufacturers who seek increased productivity and lower cost. Sold signs could be seen throughout the show.

Hydromat Director of Marketing Kevin Shults said, “We are ecstatic about the results we are seeing. We had a really good show in 2012 and this was even better. We sold a $1 million plus twin spindle machining center during the show and left with a large number of quality leads to carry us into 2015. The community really came together in a big way.” 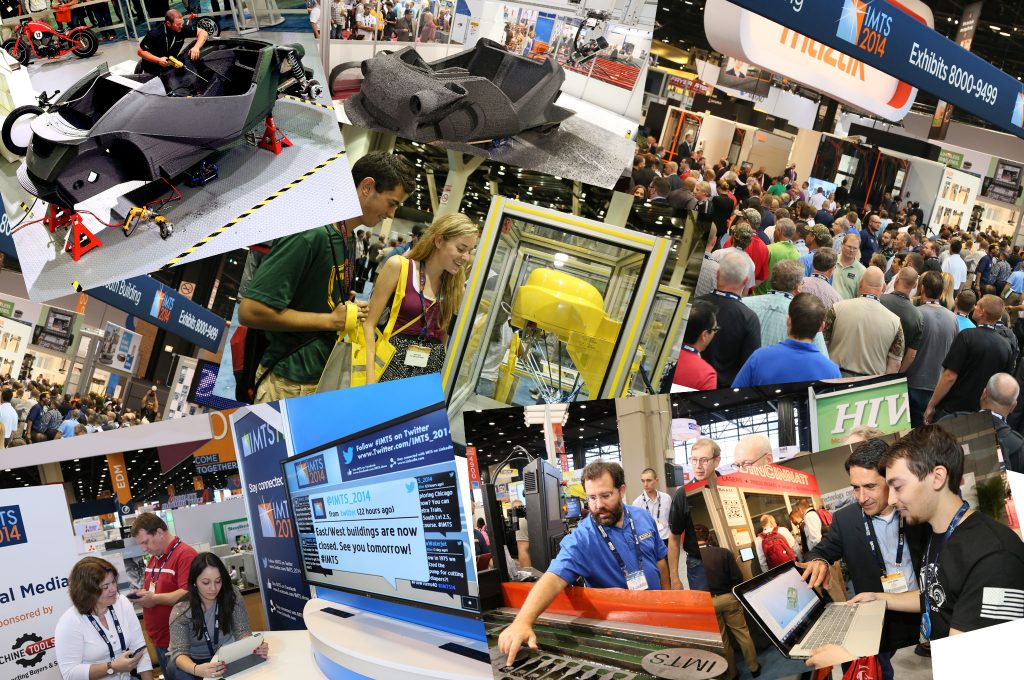 Industrial Automation NA showcased the best in process, factory and building automation with products and solutions for production automation, metalworking and precision manufacturing. The inaugural MDA NA provided a networking hub of North America’s power transmission, motion control and fluid technology sectors. At MDA NA, visitors had the chance to find the latest solutions and innovations in manufacturing, meet with key suppliers from all over the world, strengthen business network, and prepare and finalize purchases.

Industrial Automation NA and MDA NA doubled floor space over the 2012 inaugural event to more than 50,000 square feet. “This year’s IMTS and our co-located events, Industrial Automation North America 2014 and Motion, Drive & Automation North America 2014, were a huge success,” said Larry Turner, CEO of Hannover Fairs USA. “Our two co-located trade shows highlighted the latest automation and motion drive technologies and trends. Many exhibitors across the show floor mentioned the noticeable increase in attendance, as well as attendee excitement about investing in the new technologies showcased specifically across our co-located events. We appreciate the coordination between the AMT and our team as the relationship between our two firms continues to strengthen. Representatives from our parent company, Deutsche Messe, were also thrilled with the results of Industrial Automation NA and MDA NA, as well as the overall IMTS event.” 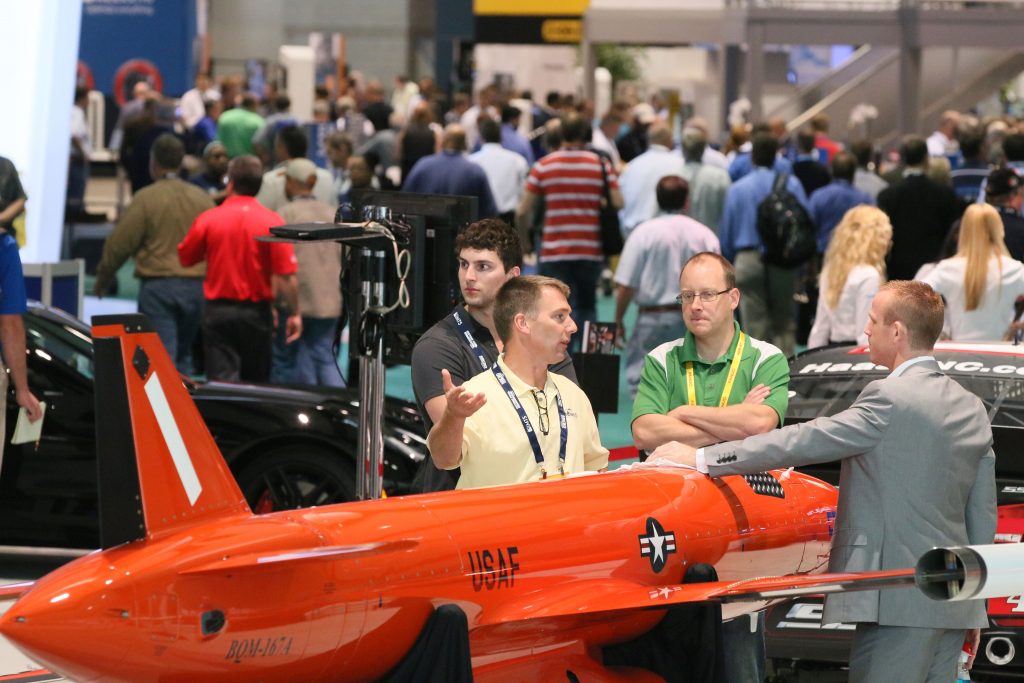 The ETC spotlighted the Institutes for Manufacturing Innovation (IMI) that make up the National Network for Manufacturing Innovation (NNMI). America Makes Director, Ed Morris, often applies the military quotation “Think big, start small and scale fast” to describe the IMI strategy. The IMIs are brick-and-mortar regional hubs connecting a national network of stakeholders to better engage the public and private sectors to tackle the toughest challenges in advancing US manufacturing.

In the ETC artist Ioan Florea’s Ford Torino Additive Art Car incorporated technology from the second and third Industrial Revolution by combining a classic assembly line vehicle with modern specialized technologies. Florea’s artwork is “culture on wheels,” showing how the use of many technologies and materials reflects today’s globalization. His work combines an iconic Ford with a fusion of liquid metal and nano and ultralight materials to create a unique display of the transition from mass production to mass customization in the industry. The Torino also uses additive technology in the form of 3D printed shapes attached to the car to reflect light and give the car balance between the organic and geometric shapes. 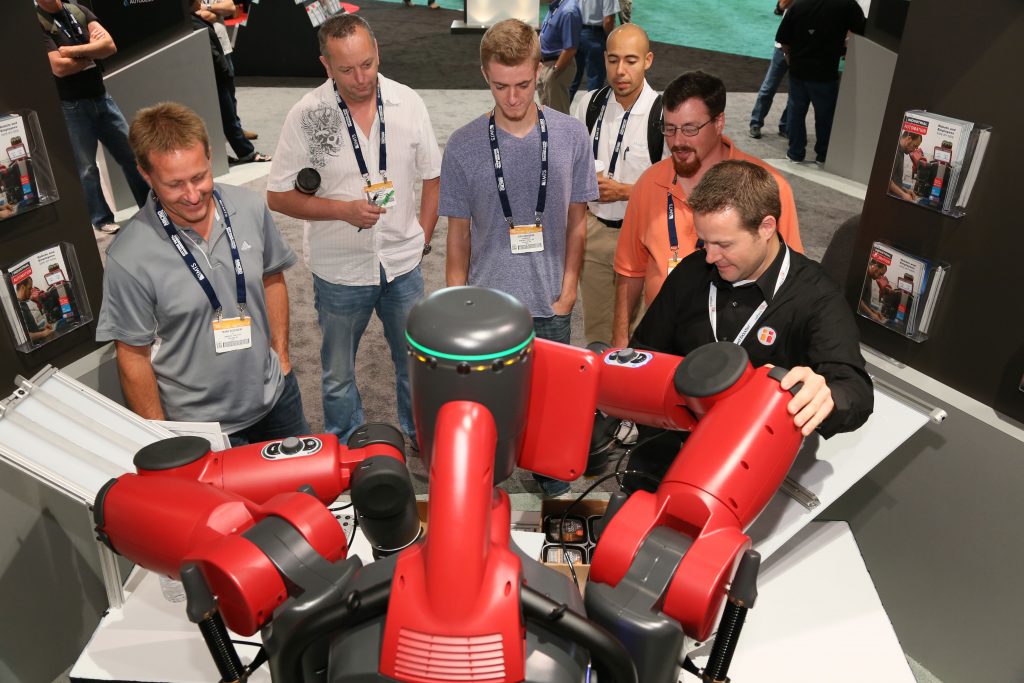 This year, the Smartforce Student Summit proved to be more successful than ever. During IMTS 17,767 students, educators, administrators and parent chaperones made their way through the event this year, almost double the number of students at IMTS 2012.

With more than 50 hands-on exhibits, the Student Summit was able to provide a fun and interactive environment to introduce educators, students and parents to exciting innovations in manufacturing technology and dynamic careers in the industry.

Students had the opportunity to see how much fun STEM (Science, Technology, Engineering, and Math) based learning can be in the Make It! area. There, students were able to try out new technologies and compete to see who could design and create the most effective 3D-printed wind turbine, courtesy of Rippl3D. The keynote speakers, including STEM celebrities like astronaut Captain Wendy Lawrence and Segway PT inventor Dean Kamen, shared insights on how these fun STEM experiences translate into careers. Once through the Student Summit experience, students were invited to visit the thousands of IMTS exhibits.

During a special program for Chicago-area school superintendents, the Gene Haas Foundation announced $50,000 in scholarships to be awarded to high school seniors pursuing a degree in a post-secondary machining, manufacturing technology or engineering program whose curriculum includes CNC machine technology training. A $1,000 grant per school will be awarded. Seniors graduating from high school this school year will be eligible. 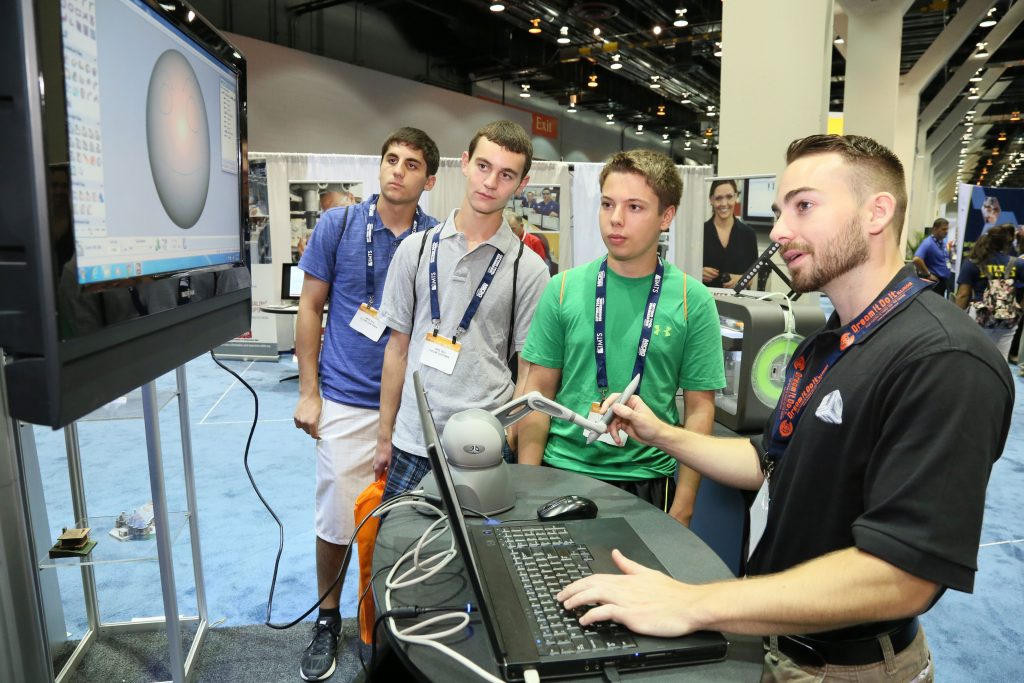 IMTS was highly focused on education and hosted six conferences: the IMTS 2014 Conference, TRAM 2014, the MDA Conference, the Additive Manufacturing Workshop, EOS NAUD 2014, and the Global Automation and Manufacturing Summit. From additive manufacturing to trends in advanced manufacturing, attendees and exhibitors were able to find solutions for their manufacturing needs while learning more about this ever-changing industry.

• The IMTS 2014 Conference, which ran Sept. 8 – 11, and attracted 50 percent more participants than the 2012 event, focused on bringing the industry together, under one roof and at one time, to discuss new opportunities. Attendees were able to network with a community of peers and experts within their industry and explore fresh ideas to enhance their business. Attendees left with different perspectives on overcoming day-to-day and long-range challenges.
• TRAM (Trends in Advanced Machining, Manufacturing and Materials) had a successful debut at IMTS 2012 and continued to grow at IMTS 2014. TRAM ran Sept. 10 – 11. The focus was on transferring advanced manufacturing technologies to the business leaders, managers and engineers who lead or play a key role in a facility that serves the aerospace sector.
• On Sept. 9, the second MDA Forum brought industry experts in to discuss best practices in motion control, power transmission and fluid power. Helping manufacturing professionals to increase efficiency and productivity, this year’s program covered industrial communications, robotic control, guidance and inspection, linear actuators, 3D-printing and 3D-machining. The MDA Conference was co-organized by GIE Media and Hannover Fairs USA.
• The Additive Manufacturing Workshop took place Tuesday, Sept. 9. This workshop brought together manufacturing professionals who were interested in, or who were already applying, additive manufacturing as a production resource. More than a 3D-printing seminar, this workshop focused on industrial applications of additive technologies for making functional components and end-user production parts.
• EOS NAUD 2014 (EOS North America User Day) on Sept. 10 was open for the first time to both EOS customers and all attendees of IMTS. Those who came were able to learn about the latest developments in industrial 3D printing/additive manufacturing, including direct metal laser sintering (DMLS™) and plastics laser-sintering directly from EOS – the world leader in laser-sintering solutions, our customers and partners.
• Also on Sept. 10, the Global Automation Manufacturing Summit 2014 at Industrial Automation North America and IMTS took place. It covered topics on industrial automation, mobility and modern maintenance practices. Speakers from Alcoa, Chrysler and McGladrey shared their expertise to help end-users increase their productivity and conquer their current and future manufacturing challenges.