Using novel metal alloys and patented technologies that eliminate the need for time-consuming and expensive machining and post processing of parts, Amorphology produces gears and other components with alloys that have material advantages over steel and titanium.

When a robot arm is executing a delicate maneuver in the harsh vacuum of space, it’s imperative the gears necessary for success be created with high-tech alloys and precision engineering.

Amorphology takes that directive very seriously and, in the company’s short history, has developed patented alloys and methods to design and manufacture gears with the utmost precision.

“We are not here to replace standard gear production,” said Stephen Ceplenski, chief growth officer at Amorphology. “We produce very high-precision gears — gears that may have very odd teeth profiles, or complex shapes to them, and that require micron-precision tolerances.”

The NASA JPL/Caltech spinoff company implements patented technology to create alloys that work in very cold temperatures and in gearboxes that require  little to no lubrication.

Those alloys are used to create small complex gears, such as strain-wave gears, which are found in the elbows of robots, and actuating components, according to Ceplenski.

“Every elbow of a robot and cobot has a high-precision, zero-backlash gear,” Ceplenski said. “These gears are all usually strain-wave gears. And, the flexspline, in particular, is the most expensive part. So, with the increased demand for robots and cobots in the manufacturing and service industries, there is a greater need for smaller and more precise gears.”

To that end, Ceplenski emphasized Amorphology isn’t concerned with the manufacturing of larger gears used in more common, terrestrial applications.

“That’s not in our focus,” he said. “Our value proposition is in  producing gears for small robots, cobots, medical devices, and aerospace applications. For example, satellites often deploy solar panels with gearboxes that, if made of traditional metals, require lubrication, a heating element, and additional power. As NASA has demonstrated, BMG gears can operate in vacuum conditions without lubrication. Thus, reducing the need for lubrication, heating, and the additional power.”

Another phase of what Amorphology can offer the industry is its ability to create these high-precision gears quickly, according to Ceplenski.

“Very specifically, our technologies eliminate the need for time-consuming and expensive machining of parts,” he said. “That’s the core. Whether that’s a gear, a fastener, or the little crown that turns my watch, it almost doesn’t matter, as long as it fits within our critical casting limits and our value proposition.”

Even though Amorphology isn’t trying to replace some methods of standard gear manufacturing, Ceplenski said the company is trying to disrupt it in a fashion.

In addition to designing high-precision gears, Amorphology has the ability to cut the production times for manufacturing them as well, according to Ceplenski.

For example, if a planetary gearbox contains five planet gears, and a company needs 100,000 of those gearboxes, that means 500,000 planet gears would need to be made. Those 500,000 gears have to come from a billet and be machined, potentially requiring numerous processes, each taking  several tens of minutes.

“If we have a mold that can make those five gears in two to three minutes — which is about how long it takes to cycle an injection mold — now I’ve taken hours down to minutes, and I’ve given you the same precision,” Ceplenski said. “If you move all the expensive machining costs upfront into the mold, how long does it take you to get to break even? Around 5,000 parts.”

But the savings continue after 5,000 parts, according to Ceplenski, to the tune of about 30 percent to 50 percent of the cost. The beauty of this production method is that it can free up a company’s machines and machinists to focus on more precision work, freeing up time to tackle a backlog of expensive parts waiting to be machined.

Amorphology’s manufacturing process is specific to the alloys that are used. These alloys are known as bulk metal glasses or BMGs. These alloys have unique properties, such as being 2 percent to 3 percent elastic, according to Ceplenski.

In demonstrations of BMG, Ceplenski said one of the alloy’s interesting characteristics is its high elasticity.

“We do a demo where we’ve got a plate of titanium, a plate of steel, and a plate of a BMG, and we take a little 10-millimeter stainless steel ball, and we drop it on the steel plate. The ball bearing bounces a few times and stops. When we drop it on the titanium plate, it acts exactly the same,” he said. “But, when you drop it on the bulk metallic glass plate, it bounces high and keeps bouncing so much that you think there’s a trick. But it’s the effect of the alloy’s high coefficient of restitution.”

Before Amorphology can determine how to best design a gear and how many can be produced, Ceplenski said projects usually begin with a joint prototyping phase.

“A customer comes and says, ‘Can you make this part to this level of precision?’ and then they give you a table,” he said. “We look at it, and we analyze it. Then we build out the project.”

Amorphology’s initial goal at that point is to make about 10 parts, after which they can be tested by the customer for hundreds of hours on a gear test rig, according to Ceplenski. When that’s successful, some slight changes may still be required. Once that phase is complete, then a full run of hundreds to thousands can begin.

“It proves we can make parts at a much lower cost and a shorter period of time,” he said. “We’ll do all of the inspection and make sure tolerances are hit. Then, we negotiate a larger deal. Typically, it’s six months to a year, just because of the volume.”

Since the BMG alloys can be more expensive, Ceplenski said Amorphology has been advancing its ability to apply powders and coatings, which has presented a challenge, but looks to be an important next step in delivering precision parts at lower costs.

For example, if creating a part for BMG is deemed too costly, then Amorphology could coat the part with a several-micron layer, which would give similar endurance, look, and shine, but would use a lot less material.

“Coatings for us is working, but it’s still very much an investigative effort; it has more to do with the bond that the coating makes between the substrate,” he said.

Parts of a certain size

As Amorphology continues to grow into its own, offering precision gears and parts and a fast way to produce them, Ceplenski emphasized his company will continue to offer the best methods to create parts of a certain size using methods that include injection molding.

“You get too big, and the alloys are not applicable; you get smaller, and they actually work better,” he said. “But if it fits in your fist, and it’s not a solid piece of metal or a huge spur gear with no hole in the center, we can probably make it.”

It all boils down to making gear manufacturers see that Amorphology is offering a new and exciting technology and set of alloys to advance the industry and push the envelope away from the status-quo, according to Ceplenski.

“Think of the lighting industry — LEDs were invented 40 years ago,” he said. “Why did it take 40 years to replace the incandescent bulb? Well, you had to convince people. You had to get the price right. You had to have applications for this new lighting technology. You had to change the power requirements. The light bulb had to literally ‘go on’ for people. But adoption of new technologies gets faster, and now we see technology replacing other technologies, literally, in three to five years.” 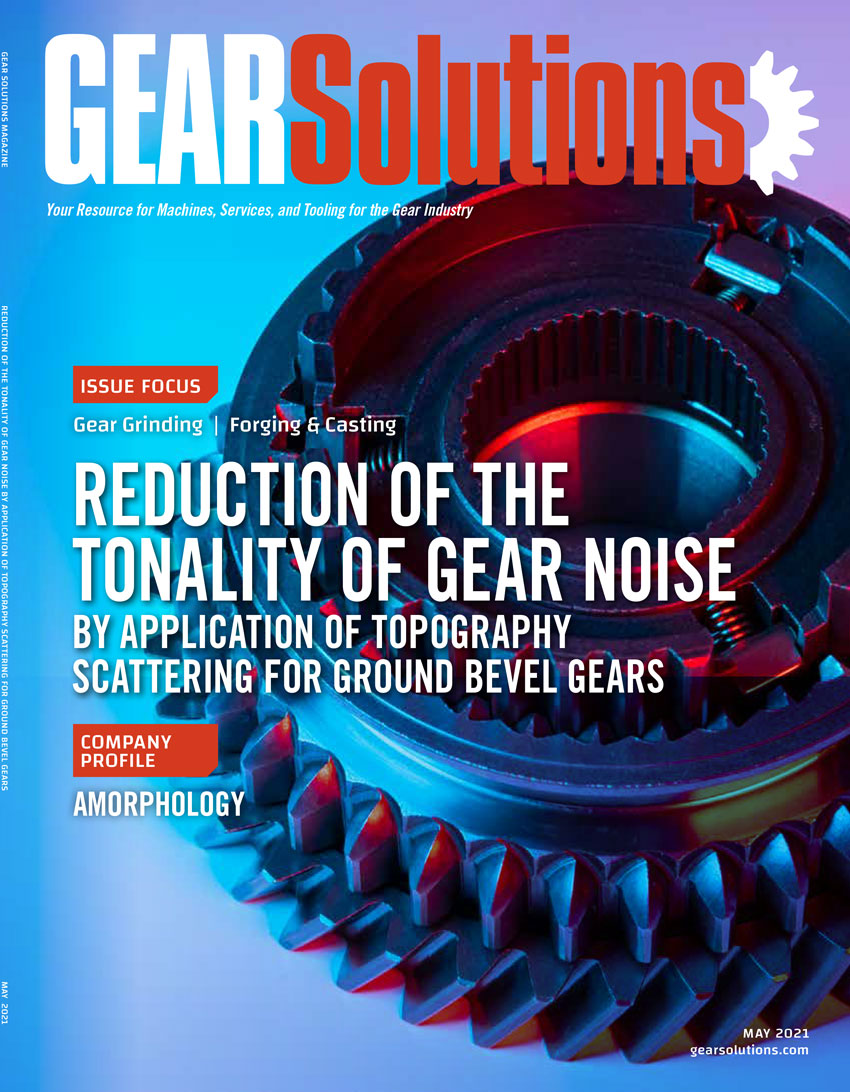