The year was 1999, and the company had just enjoyed the best year in its relatively short history. Founded just three years earlier, in 1996, Mike Magee recalls being amazed by how many orders for his deburring machines were flowing in, and he quite naturally began dreaming of expansion.

“I was talking to Dixie, my wife and business partner, and I was thinking about investing in a big new building and renting part of it out as an additional source of income, all kinds of wild things,” he says. “But Dixie, being the wise and realistic person she is, said ‘let’s wait one more year, and if things are still as good then we’ll go ahead and do all these things you’re talking about.’ Well, we all know what happened in 2000—the bottom dropped out of the U.S. economy—so if I’d acted on my crazy impulses we may well have lost the company.”

Many companies would have been affected by such a loss, especially those that have come to rely on Chamfermatic’s simple, versatile, trustworthy machines. In fact, ease of use was a primary concern when Magee was working on his original designs. “There are quite a few things that set us apart from the competition,” he says, “and one of them is that it doesn’t take intensive training for an operator to run the equipment we manufacture. Another is that all of the models we produce, for wet and dry deburring alike, are enclosed units, so that’s a major safety feature. I won’t even build a machine that isn’t enclosed.”

Other features include a unique selection of deburring methods, including brushes, grinding wheels, and carbide tools, and machines can be purchased with one or all three capabilities. As for changeovers, it takes two minutes on average, as opposed to 20 minutes or longer on some other machines. It’s the carbide tools, however, that Magee says have made all the difference.

“What the carbide tool does is allow you to get down in the gaps between the gear teeth or into other areas that are hard to reach with a brush or a wheel, if not impossible,” he says. “And this tool is so well-designed and effective that I’ve had the manufacturers of other deburring machines approach me about buying the heads alone because they’re not up on the carbide technology themselves.”

While there are some companies out there that are still deburring their parts by hand, most reach a certain point where they realize that approach is no longer feasible. By contacting Chamfermatic they’ll find a long list of value-added features even on the most basic models, as well as a company able to create a machine custom-made to their exact specifications.

“Just to give you an idea of our price range, at the lower end you can purchase one of our deburring machines for around $25,000,” Magee explains, “and that still comes with an air operated door, an air filtration system for dry deburring, a full enclosure, and an operator interface. The most expensive unit we’ve produced—which was a special order, and custom made—was probably around $105,000. This was a fully automated machine that deburred five places on a part and had a turnover within the enclosure. All I really need to know is what a customer wants, and we can make that happen. Let me take a look at the part, tell me where the machine’s going to go, and we’ll take care of the rest. I’ll say ‘it’s going to enter the machine on a conveyor, it’s going to be deburred in every place you need it to be, then it’s going to go out on an exit conveyor, and you’ll never have to touch it.’ That’s what people want to hear.”

What Magee wants to hear is that the machines his customers have bought have all performed well, doing the work for which they were designed with little or no downtime. Proof that this has been achieved came recently, when a customer that had purchased equipment from Chamfermatic in the past suddenly placed an order for seven new machines.

“This was a U.S. company that had broken down its manufacturing plant and sent the deburring machines to other locations, many of them in other countries,” Magee says, “so when they decided to get the site back up and running they realized they’d have to buy new equipment, and they came back to us. They needed them immediately, so we made that our priority and got them what they needed. To me, that’s all you need to know about the dependability of our equipment.”

As for whether he’s still tempted to embark on a major expansion these days, he says that he and his wife are pleased by where they find themselves. “You’ve got to understand that Dixie and I are living the American Dream,” he says. “Nowhere else could two kids from the country achieve what we have, and we thank our lucky stars every single day.” 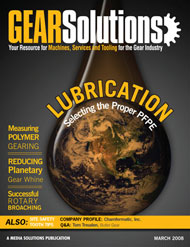