With a history of engineering ingenuity and manufacturing innovation, Felsomat has become a world leader in automated gear manufacturing.

Felsomat’s mission statement, “Better products with intelligent solutions,” has guided the company to being a world leader in the automated manufacturing of transmission gears. Beginning in 1981 with engineered pick-and-place type automation, Felsomat has evolved to providing a modular, turnkey automated system for the manufacture of helical bevel gears.

“From its inception, management has always sought to develop engineered solutions for optimum speed and cost efficiencies,” said Blake Consdorf, president and CEO. “They continually seek to understand the customers’ primary manufacturing challenge and address it with value-added machine tools and automation.”

Richard Gilchrist, Felsomat-USA chairman, echoed that innovation continues to be the key to the company’s almost four decades of success.

“I think that’s a theme that runs throughout the company,” he said. “And in fact, internally we say that Felsomat is powered by innovation. Very innovative thinking is what we do.”

In the last decade, innovation at Felsomat has ramped up a steep curve.

“Up until about 2005, Felsomat was really what we’d call an automation company,” Consdorf said. “But in 2005, our expanded product offering also included its first machine tool — a flexible turning machine. In 2007, we continued to expand and introduced the first hobbing machine, migrating Felsomat from being only a robotics company into a machine tool builder with a solution for automated gear production including tooling and fixturing. This move positioned Felsomat to expand into our Flexline automated system.”

The 2010 acquisition of Felsomat by Reischauer spurred the advancement of Felsomat’s Flexline concept.

Consdorf said Reishauer is recognized worldwide for hard-gear finishing, typically the last process in the gear-manufacturing process. This led Felsomat to re-think all the required processes in front of that and engineering the Flexline system that takes a blank all the way through to a finished gear.

According to Gilchrist, the Flexline is ideal for addressing the changing market conditions facing today’s major automobile manufactures.

“Years ago, automotive companies would have dedicated manufacturing lines,” he said. “Advances in transmissions and the required gears were nominal so that these lines were rarely outdated.”

Today, with all the variations on engines and transmissions, manufacturers can use the same equipment, but it requires continued change-over to meet the expanding transmission demands for greater on-road performance and fuel efficiency, according to Gilchrist.

The innovative design of the Flexline focuses on improved cycle times throughout the entire process.

Consdorf said Flexline’s modular concept incorporates stand-alone machines for turning, hobbing, welding, honing, and then finishing with Reishauer gear grinding, all connected by Felsomat’s automation expertise. All Flexline components include some innovative work-handling technology. Grippers and fixtures on the machines feature trigger-operated quick-change devices without requiring the use of wrenches or special tools. The resulting part changeover requires only seconds.

The Flexline begins with its FTC module configured in either single or dual spindles for green, hard turning. Initial cutting time of the blank is reduced with chip-to-chip cycles being some of the fastest in the industry. The turned blanks are transferred to the hobbing machines. This multi-process technology eliminates the need for additional machines by combining both roughing and finishing of the gear profile as well as the chamfering and deburring of the tooth flanks. Next, with the integration of the assembly and laser-welding in the manufacturing process, all radial or axial welding processes for idler gears are done in-line.

Integrating the heat-treating process into the chip cutting provides the continuous flow production. With the in-line unit, the work pieces are placed in single layers on the heat-treatment racks, eliminating the usual high volume, off-line batches of a conventional process. The result is fast and consistent heat treatment in all process steps, which guarantees a repeatable result at the lowest distortion possible.

After the heat treatment, all functional surfaces of the gear, including tooth flanks, require a fine finishing to achieve the optimum functionality of the work piece. Once again, a dual spindle turning unit enables rapid machining time in tandem with the load and unload function. The final step features the continuous generating gear grinding process of a Reishauer RZ160. This dual spindle unit, again, results in rapid cycle times while achieving optimum precision of the finished gear.

The other key benefit Felsomat offers with the Flexline concept is a true understanding of the manufacturing process from start to finish. In addition to providing the machine tools and automation, Felsomat also de-couples all of the machining processes, which leads to higher efficiencies, lower costs, and planned maintenance and down time.

“The total cost of ownership compared to other options is something we stress and put forward as a unique major benefit for companies considering Flexline,” Consdorf said.

A Focus on Customers

“By selling a complete manufacturing solution as opposed to simply a machine tool, we focus on all the factors that might impact a customer’s ability to produce gears efficiently and profitably,” he said.

Gilchrist added that sometimes a customer might be thinking of a system based on what they have already experienced.
“Our job is often to get potential customers to think out of the box,” he said. “Part of Felsomat’s innovation requires them to re-think what they may already know about gear production. That’s not always easy, but when they hit an ‘ah-ha’ moment, we can roll up our sleeves and really start showing them how we can make a difference in their future operation.”

“I know it’s often over used, but we make a concerted effort to be a partner to our customers,” Consdorf said. “When they allow us to transcend being just a machine tool vendor and allow us to provide consultative input based on their individual requirements combined with what we’ve seen from our installed base, we can make a real contribution to their bottom line.”

With machines in North America, Europe and Asia, the numbers show Felsomat’s outside-the-box thinking is working.

While the Flexline has enabled Felsomat to approach the big automotive companies such as Ford, GM, and Chrysler with the ability to not only automate their processes, but machine gears from start to finish in a modular line, Consdorf and Gilchrist said they are looking to the future. They cited the rapid advancement to electric cars and self-driving vehicles as an area of opportunity. Outside of the gear industry, Felsomat has started to manufacture crankshafts, camshafts, and valve bodies, while exploring other high-volume markets where Felsomat innovations can provide manufacturers with significant competitive advantages. 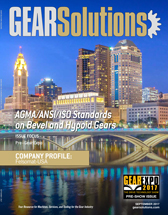