With roots in gear research, this company continues developing new designs for its cutting tools and gear-manufacturing equipment.

Seventeen years ago a group of gear specialists from Taiwan’s government-funded Industrial Technology Research Institute (ITRI) recognized a local market need they were equipped to fill. As specialists in designing and manufacturing gears and cutting tools, while also working in the area of heat treating, they realized the need for a high-quality gear cutting tool manufacturer in Taiwan, so that’s what they set out to do.

“A group of individuals led by Chuck Chen, our founder and president, established the Luren Precision Co., Ltd., in 1994,” according to Gerald Kuo, who joined the company in 2004 and is now general manager of its Chicago office, which opened its doors in July of 2010. “The company’s first hobs and shaving cutters were made available to the Taiwan market the next year.”

The early years saw many new developments in gear cutting technologies and machines, including a CNC relieving lathe for hobs, a CNC serration machine for shaving cutters, and CNC hob sharpening machines, which were used internally for many years before being offered to the public. The company obtained ISO 9001 QA system certification in 1999, and by 2001 Luren was the formal gear cutter supplier for companies such as Honda and Musashi. Hob sharpening machines and worm grinding machines were introduced in 2005, with 2006 marking the launch — and CE System approval — of Luren’s horizontal gear profile grinding machine. That was also the year that Luren joined the American Gear Manufacturers Association. Other products were developed along the way, including spinning pumps and driven tool holders. 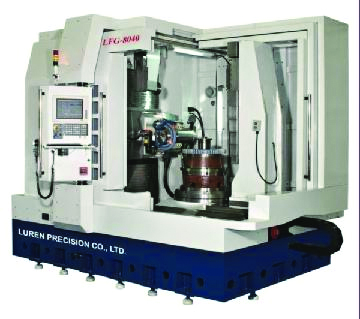 “We don’t manufacture gears and sell them on the open market,” according to Darian Ditzler, sales engineer, “but we do make gears for our own use, such as in our spinning pumps and driven tool holders. We’ve also invested in top of the line machines like Klingelnberg, Leitz, and Abar-Ipsen for manufacturing and testing our gears and hobs. But our pride and joy is the LFG-8040, which was launched in 2009. We are getting some great feedback with this machine.”

With a maximum workpiece diameter of 800mm, the LFG-8040 features Fanuc CNC controls and proprietary Luren software that allows the user to simply enter the dimensions of the final piece and go to work. Luren’s own service engineers—not subcontractors—install purchased equipment and remain on-site to provide training until the operator is comfortable with the process. The machine also features an onboard measurement system, an automatic stock dividing feature, and diamond rotary dressing, which are all standard. Troubleshooting can be done online, saving the customer time and money. New machines currently in design include a vertical grinding machine with a maximum workpiece diameter of 1,300mm—ideal for applications in the wind energy market—and a generation-type gear grinding machine, to augment its cast of profile grinders.

“Our 1,300mm grinding machine is being developed in collaboration with one of the major national universities in Taiwan,” Kuo explains, “and we’re also very excited about the development of our generation-type grinding machine as well.”

With four dedicated sales offices located around the world, an established network of sales representatives, and a healthy mix of academic and entrepreneurial philosophies, Luren will continue conducting R&D into new cutting tools and equipment for the gear manufacturing industry. “We’ve spent 17 years building our reputation overseas, and we’re eager to position ourselves as a quality OEM throughout North America, as well,” Ditzler says. “We look forward to showing gear manufacturers our hob sharpening machine at Gear Expo, because we feel we can deliver a very high quality machine tool that is reasonably priced.”