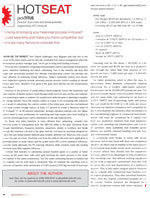 “Show me the money!” Rod Tidwell challenged Jerry Maguire with that line in the movie of the same name, and it’s also the comeback from senior management when the transmission product manager says “we’ve got to bring heat treating in-house.”

There are two sometimes competing methodologies used to case harden transmission gears: induction hardening and batch carburizing. Few in the industry will deny that single part processing provides the ultimate manufacturing control, but perhaps the least affective at improving energy efficiency. Today’s machining centers and micron-level inspection systems provide extremely precise process control creating an almost perfect gear form. Wouldn’t it be great if the gear went directly into the transmission from there?

Induction is the process of using indirect electromagnetic forces like hysteresis and eddy currents of electric power to heat the gear teeth and root only, not the core material, and quenching in water or polymer. It’s usually done while the gear is spinning to equalize the energy transfer. Since the surface carbon of a gear is not increasing with induction as it would in carburizing, the carbon content of the entire gear, even the non-hardened core must contain enough carbon, at least 0.7 percent to create a hardness value of 60 Rockwell “C” at 90 percent martensite. Besides elevated material cost, the higher carbon steel is more problematic for machining and may require prior heat treating to address nonhomogeneous carbon distribution in the raw material form.

For those who think induction is more efficient than carburizing, consider how electrical power is manipulated from the 480-volt utility to the gear. Electricity flows through transformers, frequency inverters, capacitors, diodes or rectifiers, and finally through the induction coil and to the gear. And the coil must be precisely designed to match the part being heated; different gear module, different coil. Mind you, this occurs to just one part at a time. Electricity cost from the utility to the end user’s application is generally based on peak values and the power factor (PF), a term relating to efficiency. Inductive loads attenuate the PF, reducing efficiency while resistive loads like heating elements have little negative influence.

Contrast that scenario to carburizing several hundred gears in a pusher or batch furnace at the same time, with each gear receiving the same process in the same atmosphere in the same environment. Yes, the entire carburizing furnace is heated, but the material cost for each gear is minimized. Take for example the operating cost to carburize, oil quench, wash and temper a 5,500 pound (2,500 Kg) net load of truck rear axle pinions in a 36” x 72” x 36” gas heated (UBQ) batch integral quench furnace:

For higher production, which is often the case for automobiles, those drivetrain components requiring carburizing for a modern eight-speed automatic transmission can be 16,646,000 pounds per year. This production would require a two-row pusher furnace and with the same utility cost carburizing for six hours at 1700°F (926°C) and oil quenching, wash, and temper the cost would be $0.0118 or 1.18 cents per pound. Obviously, my induction comparison isn’t completely fair but it does illustrate the extremes often encountered by the manufacturing engineer or commercial heat treater. Issues that must be considered by a captive heat treat are: production required; heat treat equipment capital cost; operating and infrastructure cost; country of operation; utility availability and reliability (power failures per month); material handling and part flow; and environmental issues.

A commercial heat treater is faced with similar decisions, but is also faced with their own competitive situation as others may be bidding on the same project. A commercial heat treater would never consider such a project unless they already had the equipment in-house, which is an advantage for they would know the operating cost. And without existing equipment would need a long-term commitment from the OEM to justify the cost and depreciation of a dedicated system. This is why batch integral quench furnaces are so popular with commercial heat treaters even for higher production. They offer unlimited flexibility, often after the original committed program as run its course. Pusher furnaces are designed for a specific production volume with minor variation.