Two men built an Australian company that’s become a global powerhouse. This profile tells the story of a manufacturer you need to know about.

In the early seventies, two engineers met while working for a government ordnance factory in Australia. Although one had an academic background, and the other had been more involved in the technical side of engineering, they found that their professional interests meshed, and they decided to become the first Australian manufacturer of CNC controls. After some time spent tinkering in their garages, they began showing the results at various trade shows, and it wasn’t long before they were selling their controls and software to manufacturers of milling and laser-cutting machines. Such was the beginning of the company known as Australian Numerical Controls and Automation, or ANCA, which was founded in 1974.

Some 10 years later the two men — Pat Boland and Pat McCluskey — had a realization, according to Russell Riddiford, who is president of ANCA, Inc., the company’s U.S. arm, and a director of the Melbourne-based parent company, ANCA Pty. “They saw that they were only realizing a small portion of their potential sales by supplying the controls for other people’s machines,” he says, “so they thought ‘why not build the machines ourselves?’”

This led to the design of their first cutter grinder, which was launched into the United States in 1986. After a three-year contract with a representative had run its course — during which only three machines were sold — the company knew it needed to provide a stronger corporate presence, which led to the founding of its Michigan headquarters in 1989. “We sold 11 machines that first year,” says Riddiford, “so being closer to our customers here in the States was definitely the right decision for us.”

The initial plan for the three-person operation was to concentrate on a 500-mile radius in order to establish a foothold and so that the company’s service technician could get to customers quickly. Just as quickly, orders began to flood in, so that the facility now employs some 48 individuals, with 26 found in the main office and the rest — regional managers, technicians, and applications engineers—located strategically across the country. The reason for this goes back to the company’s lesson in the importance of direct representation.

“This company is quite unique in that we’re 100-percent responsible for every aspect of our product,” Riddiford explains. “We design the machines and build them, along with the electronics and CNC controls, and we write and develop our own software, all of which is done under one roof in Melbourne. That’s why it’s important for us to have ANCA employees in the very heart of our customer base, so that nobody has to wait for someone to fly across the country if they’re interested in one of our machines, or if they’re already using them and need some assistance.”

While the company does license some representatives in the U.S., their efforts are overseen by seven regional managers, and this is a model that is utilized at ANCA’s many locations found around the world. The company has dedicated offices in the United Kingdom, Germany, Italy, China, Japan, and Brazil, in fact, and it has recently opened a manufacturing facility in Thailand, which also doubles as a sales office.

While the Thailand facility is an integral part of ANCA’s manufacturing operations, Riddiford is quick to point out that only CNC control cabinets are made there, which are then shipped to Melbourne for final assembly. “Since we purchase many of our electrical components from companies in Asia, it just made sense to locate our wiring activities — which are very intricate and time consuming — a bit closer to the source,” he says. “Once that’s done they’re sent to our plant in Australia, where the CNC controls are mounted to the cabinets, which then go on the machines themselves.”

In addition, ANCA’s machines are designed in a way that encourages users to be creative. “Our software architecture is very open, and there’s a reason for that — our gear manufacturing customers asked for it,” he says. “They wanted a machine that was flexible and would allow them to change the profiles in order to enhance their R&D efforts, so that’s what we gave them. And, to be honest, that’s been a very large part of our success, both here in the United States and around the world — listening to our customers, and then giving them exactly what they tell us they need.” 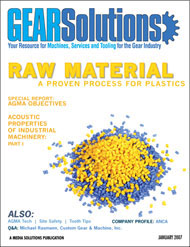