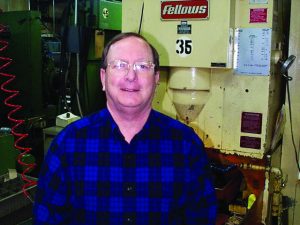 I understand there’s an interesting story behind your company’s name and location.

That’s true. My father, Joseph Arch, founded Southern Gear in Miami. He was originally from New England, where I grew up, and he’d worked for Fellows as a tool and cutter design engineer until 1933, when he lost his job because of the Great Depression. He worked for another company until 1946, when he launched the Arch Gear Works in Boston. One thing I can tell you about him is that he hated cold weather from the day he was born, so we spent our vacations down in Florida each year. When he found out that a man who was one of his best gear cutters was moving there he decided it was time to head south himself, so he handed the reins of Arch Gear over to my brother and opened Southern Gear in 1957.

He and my mother would spend the summers up north and the winters down south, which was perfect for them. I joined Southern Gear straight out of the Navy in 1968. Dad came to the office well into his nineties, and he passed away at 95, so we had a good 60 years together. We had a wonderful relationship, we were like best friends. My brother eventually decided that running a gear manufacturing company wasn’t for him, so Arch Gear isn’t around anymore, but Southern Gear is going strong.

How have you weathered the recent economic downturn?

Very well, actually. We decided to make certain capital investments, so we’ve bought some new equipment and expanded our capabilities. It’s funny to think about how my father had 200 employees at one time, and CNC technology allows us to produce 10-15 times as many gears as he could with just 80 people. We’re also fairly well diversified in terms of the markets we serve, so that helps since one usually seems to be up while another one is down. Plus we’ve always been known for small-lot, high-precision loose gearing for applications in the aerospace, maritime, and defense industries, just to name a few.

One of the jobs I’m proudest of involves parts we made for the repair of the Hubble telescope. They had to go back up there and mount it with a corrective lens, you may recall, and our gears operate the lens. When I see the incredible images that Hubble has sent back to earth since the repair, I get a real kick thinking about how we played a role in that. People come to us when precision matters, and I think part of the reason for that is because everyone here takes so much pride in what we do.

Back in 1987 I decided to adopt an Employee Stock Ownership Plan, or ESOP, which basically means that we’re an employee-owned company. When your employees know that they have a stake in the company’s success, then they’re willing to go the extra mile when it’s called for, and employee retention improves so you don’t lose the knowledge they’ve developed over the years in your shop. We’ve got good people here, and they do a great job.

You strike me as someone with a lot of enthusiasm for his profession. Would you agree?

Oh, yeah. You’ll find gears in almost everything, or in the machines that make or deliver those things. Being involved in this industry lets you do and see things that you never would have otherwise, like working on vehicles used by the U.S. space program on other planets. I enjoy talking about what I do, as well. My alma mater is the University of Maine, and I had the dean of the engineering school in here recently to take a tour of our operation. I introduced him to the dean of the engineering school at Florida International University, where I speak to the undergraduates about manufacturing gears.

I also address members of the executive MBA program at Nova Southeastern University about the things I’ve learned over the years. I tell them about the company, how Dad started it, and about the ESOP program, because business is really about people. But to answer your question, yes, I enjoy what I do … I love this business, actually.