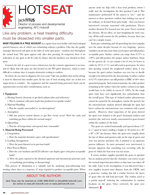 What follows is a true account in a captive heat treat facility with batch integral quench furnaces, one of which was carburizing without a problem. One day, the quality manager discovered soft spots on the sides of some spur gears—random ones throughout the racked load. The spots appear only after shot peening. As tempered, there is no indication of any spots at all. It’s only by chance that the hardness was checked at those spots.

Granted, the side of a gear is not a critical area, but the cosmetic appearance is an issue, and it’s likely that soft spots are also located on the PD (pitch diameter), which is more difficult to evaluate since it requires destructive testing to confirm.

So where do you start to diagnose the root cause? Like any problem that needs solving, it must be dissected into smaller parts. In the case of heat treating, there are at first two major items to consider—the equipment and the material being processed. Each can be separated into several other considerations, such as:

a. Heating System (elements or gas fired radiant tubes and refractory)
i. Was it consistent with prior loads that produced acceptable results?
b. Material Handling
i. Was the transfer uneventful (i.e. no interruptions)?
c. Atmosphere
i. Did any process control alarms or gas flow events occur? Were the endo and enriching gas flows within the normal ranges?
d. Quenching
i. Was the oil temperature and quench time reasonable?

a. Composition
i. Does the material chemistry agree with specifications?
b. Loading Arrangement
i. Were the parts fixtured as in previous loads?
c. Prior Process History
i. Does the core hardness and ECD (effective case depth) agree with prior acceptable loads?
ii. Were the parts exposed to the identical upstream and downstream processes such as machining, prewashing, or shot-peening?

This process of elimination is a valuable tool for analyzing nonconforming heat treating where there is a sequence of steps required to produce acceptable parts. When anyone seeks my help with a heat treat problem, before I really start the investigation the first question I ask is: Was maintenance performed? If the answer is “no,”—and the answers to these questions confirm that nothing was out of the ordinary or deviated from prior loads—then you haven’t interviewed everyone associated with production. There’s another theorem I’ve learned over the years: Never overlook the obvious. All too often, we start imagining the most way-out, off-the-wall reasons for the problem, because there just can’t be a simple reason.

Endo gas carburizing and oil quenching has been popular over the many decades because it’s very forgiving—process variables can deviate more than you’d expect and still produce acceptable parts. Surface carbon can range from 0.75% to 1.00% and still produce the proper surface hardness. Same for the quench oil—it can contain a lot of soot, be hotter or colder by 20° F (11° C) and still result in good parts. So when shot peening created the roughened surface spots, it was because the spot’s surface hardness was very low or ductile enough to be deformed by the shot peening. A surface carbon of 0.75% stated above can still produce a HRC of 60+ when quenched properly. And retained austenite, the softer product remaining at the surface when the surface carbon is too high, would have to be widely in excess of 1.00%. So the rough spots must have seen significantly less carburization than the overall gears. This type of isolated surface phenomenon cannot be caused by the atmosphere, maybe the quench, but the microstructure analysis showed although the spots had lower carbon the microstructure was consistent with a good quench.  However, closer inspection of the gears showed the spots were isolated to the gear’s horizontal surfaces and nowhere else, and were mostly concentrated to gears located within the confines of the load.

The gears are racked horizontally and spaced about 1/2” to 1” apart in layers totaling a height of 30 inches in a 36” x 48” x 36” size furnace. Since the spots were roughly about the size of dimes and quarters only on the tops of gears, and were not present anywhere else, it pointed to an upstream process influence. As more personnel were interviewed, it became apparent that something was occurring with the gears of which the heat treat was not aware.

It seems another supplier provided the gears in question but an analysis proved that the chemistry was correct as per the normal inspection procedures so that issue was taken off the table. Later in the investigation, it was discovered that a new supplier, located some distance from the OEM, used a protective coating that left a residue between the layers of gears after the full load pre-wash. The residue acted as a partial stop-off reducing the carburization in random locations on the gears. Once corrected, the spots were eliminated. 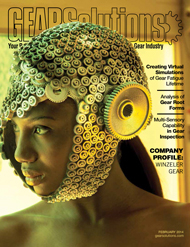