Revamped, recharged, and relocated, this Longmont, Colorado-based company is poised to finally reach its true potential as a premier aerospace and commercial supplier.

Sometimes the name says it all. Such is the case with Aerocom Industries, with “Aero” referring to the aircraft/aerospace (AS9100 certified) side of the business, and “Com” (ISO 9001 certified) to its commercial pursuits. “Historically you’ll find that businesses in this industry are either involved in aerospace or industrial applications,” says Tom Lang, the company’s president. “But it was our intention from the start to be halfway in between each one, so that we could go either way. Besides, a lot of commercial manufacturers are requiring higher precision these days, so we’re really trying to do something different here.”

As is befitting this different kind of company, it has a somewhat convoluted story. Originally incorporated by Lang and his partner, Jim Buschy, in 1989, the two eventually sold the company once they’d joined Kapp Technologies in 1991. Renamed Unique Power Products in 1997, it survived mainly on pre-existing government contracts, with no real signs of growth or evolution. Lang and Buschy felt it had potential, and when they found themselves with the opportunity to buy the company back in 2002, they did so, with the company’s name reverting to Aerocom Industries.

While the two partners agreed that, with the proper guidance, the company had a great deal of growth potential, they decided that Lang possessed the necessary entrepreneurial drive. The problem was that Lang was vice president and general manager of Kapp Technologies, a job that he loved, so an innovative solution was required.

“In January of 2004 I turned in my notice, letting Kapp know that I’d be leaving in three years, in December of 2006,” he says. “That gave them plenty of time to make their plans, and in the interim Aerocom’s general manager, Bob Jeffers — a 40-year gear industry veteran — began the rebuilding process. I stayed focused on Kapp the entire time, and I didn’t do a thing with Aerocom until that period had come to a close. It just seemed like the right thing to do.”

Now that he’s free to do so, Lang has been involved in a whirlwind of activity, rethinking the company’s business model and building the infrastructure necessary to achieve its lofty goals. One issue involves getting the word out that the company exists. “While we still hold the government contracts and are proud to have them, back when that was basically our sole activity there was no need to market ourselves,” he explains. “But now that we’ve decided to pursue other avenues of business, and to compete globally, it’s time to begin advertising our capabilities and approaching potential customers.”

Changes to the company’s physical plant have been made as well, starting with the purchase of a 34,000 square-foot air-conditioned building. The move from the old facility took place in a single week’s time, and the first order was shipped on the eighth day. As for how many Aerocom employs, Lang says the number can be misleading: “Today we have seven human employees, and in the next year possibly 10 to 12,” he says. “Beyond that the rest of them will be manufactured by Fanuc.”

The idea is to rely heavily on automation, which is necessary in order to compete in the worldwide market, because “the one thing the U.S. doesn’t do well is to achieve low labor rates.” Still, since robotics usually benefits manufacturers with extremely large production runs—200,000 pieces, say, as opposed to the 100-200 piece lots Aerocom will produce—a new approach will also be required in that area. “We’re making the extremely precise and complicated parts that are usually done manually, and our approach will be to first run these smaller lots via automation and then find similar products that will fit into those metrics. Then we can identify the customers for those parts and even add new product lines without incurring a lot of additional expense. So it’s a very different approach, and only time will tell if it’s successful or not.”

Specializing in CBN gear and form grinding, the company’s plan at this point is to grow slowly in order to insure it can deliver on its promises. Preliminary outreach has already proven successful, however, with two new contracts signed in recent months. Lang says that he is enjoying seeing the company finally gearing up to meet its true potential. “We’re basically in uncharted territory here, because there’s not exactly a blueprint out there to follow for doing something like this,” he says. “But we’ve got the energy, the ability, and the experience to make this work. So now it’s time to get busy.” 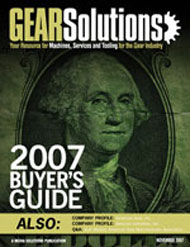