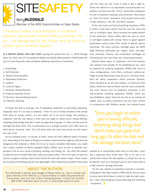 In a report issued late last year covering the period from Oct. 1, 2009 through Sept. 30, 2010, the U.S. Occupational Safety and Health Administration (OSHA) listed the top 10 most frequently cited standards following inspections of worksites.

Of these the lack or improper use of respiratory protection is particularly disturbing, especially since it’s so easy to address. I think it’s one of those situations that simply boils down to human nature—it’s just easier not to do some things, like wearing a respirator. And the real shame is that once you begin to realize you’re having difficulty breathing doing things that didn’t make you gasp that long ago, it’s often too late and the damage has been done. This is particularly true in younger workers, who often seem to think they’re immortal. Then, 10 or 20 years down the road, they found out that wasn’t the case at all.

As you probably know—or should, at least—there are many different types of respirators, depending on the types of things your workers need protection against, and also how dangerous that material is. While this is by no means complete information, you might find a quick rundown of what’s available helpful. Matter such as dust or particles suspended in the air as a result of grinding, sanding, and milling, etc., are often the easiest to address since a simple filter-type mask will usually suffice. This is the type of mask you picture a surgeon wearing, which hooks behind the ears with elastic straps. These masks do not obstruct breathing and are very lightweight, often featuring a bendable metal band over the nose you can crimp in order to get a tight fit. These are referred to as disposable dust/particulate respirators, but there are also “N.R.P.” particulate respirators for use in situations requiring more protection. Also known as “dust mist fume” respirators, they provide three levels of filter efficiency—95, 99, and 99.97 percent.

At the next level you’ll find air-purifying respirators (APR) in either a half-mask version that fits over the nose and chin or a full-face mask, which provides the added benefit of eye protection. These masks allow the user to screw in cartridges loaded with various filters to guard against particulates and/or active filter media to absorb various chemicals. The most common cartridge types are HEPA (high efficiency particulate air), organic vapor, acid gas/mist, pesticide, mercury, and combination cartridges for environments with more than one contaminant present.

Beyond these types of respirators you’ll find devices and systems that actually do the breathing for you, such as powered air purifying respirators (PAPR) that come in many configurations, most often a belt-worn battery/cartridge housing that pumps clean air up to a full-face mask. Next are airline respirators—either pressure demand, which provides air as the user inhales, or continuous flow styles, where the clean air blows into the mask constantly. The most serious form of respiratory protection is the self-contained breathing apparatus (SCBA), which you see firefighters using. These do not rely on an outside air supply, such as airline respirators that are often hooked to compressors with filtration panels, but instead house purified air in pressurized tanks worn on the back, much like a deep-sea diver would wear. This is for use in an environment where the atmosphere is simply too toxic to be filtered, such as a burning house or the empty hold of a ship used for carrying chemicals.

For the vast majority of operations involved in manufacturing gears, filter-type masks or APRs will do, but you need to know about all of these in order to make the right selection. Learn more by going to [www.osha.org] and searching “respirators.”

Use of Clean Steels