Like many college graduates, Garrett D. Orr filled a couple of different positions after graduating from Duquesne University, even working in the retail shoe industry for a time. In 1968, however, he founded Pennsylvania Flame Hardening in Zelienople, northwest of Pittsburgh, which ended up being the fit he’d been searching for all along.

“He’d grown up in Erie, and he was an outstanding athlete throughout high school and college, even being voted into the Erie Hall of Fame in 1995,” according to Bruce Curry, vice president of sales and marketing at the company now known as Penna Flame Industries. “I was lucky to have the opportunity to work with Gary before he passed away in 1992. He was a good man, and he built something that has really stood the test of time.”

These days the company is headed by his son, James P. Orr, and his grandsons are employed there as well. “Michael is our robotics division manager, and Andrew is in the sales/customer service department,” Curry says. “So this is a third-generation privately owned company, and it really is a family for all of us who work here.”

Longtime experts in flame hardening processes for the automotive, steel, gear manufacturing, and textile industries, among others—and also with a roll manufacturing division—Penna Flame embarked on a remarkable journey in 2007. While attending a job fair at Butler County Community College—or “BC3” as it’s know locally—Curry and his colleagues were approached by a man who asked if they’d ever considered automating the flame hardening process. “We thought it was a great idea,” he says, “and that’s when we found out he was a professor who taught robotics in the Department of Engineering at Robert Morris University in nearby Moon Township.”

This began a relationship between Penna Flame and the university’s engineering department in which faculty and students worked to help design a robotic flame hardening cell. Robert Morris University (RMU) had connections to Innovation Works—an investment organization supporting technology in southwest Pennsylvania—and were able to obtain grants in support of the project. “We knew all about flame hardening, and they knew all about robotics and engineering,” Curry says, “so it ended up being a very positive and engaging project for everyone involved.” 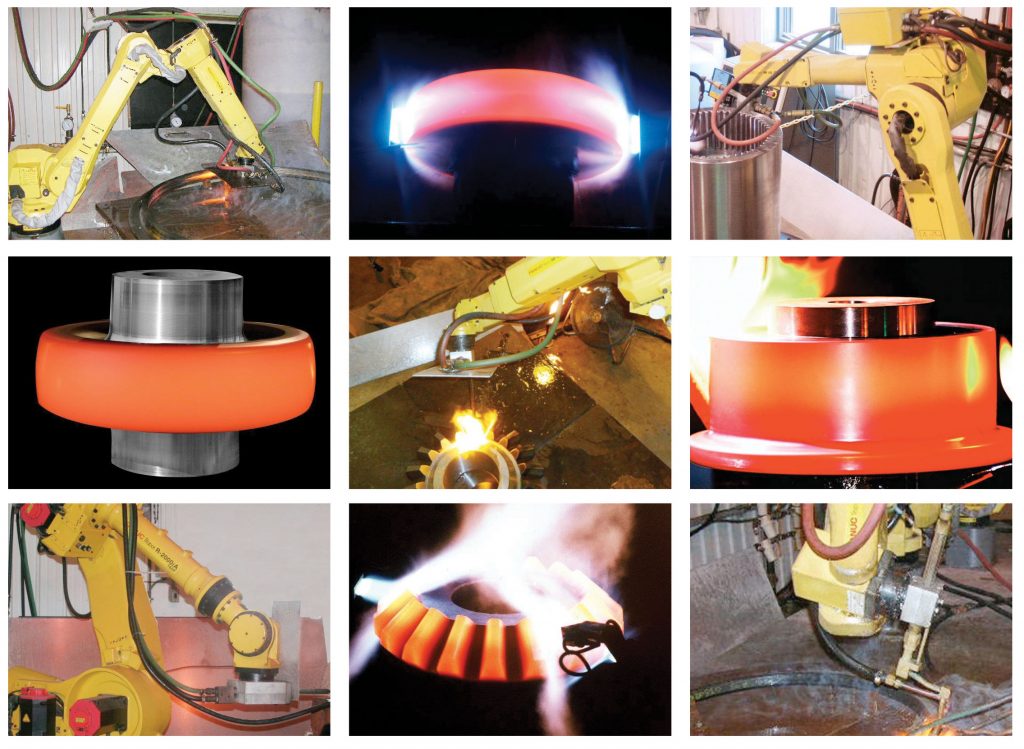 The first robotic flame hardening cell was installed in April of 2008, allowing for unparalleled uniformity and repeatability in the precision surface hardening of steel products such as gears, bearing races, and rings. For gear manufacturers in particular, the ability to focus heat and dwell at precise intervals between teeth is especially beneficial. The process was so successful that Penna Flame now has three robotic cells, with the third installed in 2011.

At a time when U.S. manufacturing is faced with the challenge of figuring out how to recruit the employees of the future, Penna Flame could be seen as a model for the type of community involvement and activism that will provide part of the solution. It is a member of the Butler County Manufacturing Consortium, for instance, which serves as a liasson between area industry, county and state organizations, and educational providers, and it is even involved with a local Boy Scout troop. “They have actually created a new merit badge in robotics, along with other STEM subjects,” Curry says, referring to science, technology, engineering, and math, “and we’re providing an instructor to help troop members to work toward this achievement.”

With services beyond flame hardening that include metallurgical testing, wheel and axle assembly, cryogenic processing, and tempering/stress relieving, Penna Flame Industries is an excellent resource for manufacturers of all types throughout North America. But there are other reasons why it’s a special company, Curry says.

“The very first employee that Gary hired was a man by the name of Robert Bubb, and even though he’s retired now he still works here on a part-time basis, sharing his knowledge with the younger guys who are just getting started in their careers,” he says. “The fact that we’re respecting the past while looking to the future is one of the things that I like best about working here.”