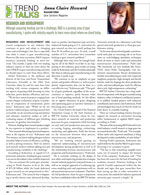 Research and development are crucial components in any industry that continues to grow and adapt to changing times and technologies, but that is especially true when it comes to gear manufacturing. However, like most necessities, R&D requires resources, primarily funding, to move forward. This month, I spoke with two leading industry experts to find out more about the state of R&D in gear manufacturing and what we should expect to come from those efforts.

Ahmet Kahraman is the professor and director of the Gear and Power Transmission Laboratory (Gearlab) at the Ohio State University where he and his team have been working with various companies on different aspects of gearing while focusing on noise reduction, power density, efficiency, and cost.

“We do have research projects ranging from contact fatigue evaluations of gears to prediction of components of transmission power losses,” Kahraman said. “While we do not perform traditional gear-cutting research here at Gearlab, we do manufacturing simulations and tolerance sensitivity studies as well as evaluating impact of different gear finishing processes on gearbox functionality.”

However, findings from research projects might be too expensive to implement in a product.

“New research often brings functional improvement at the expense of cost,” Kahraman said. “For instance, we know making the gear surfaces smoother helps in terms of efficiency, scuffing, as well as pitting resistance. How we achieve such smooth surfaces without adding cost and manufacturing variability is the challenge.”

According to Kahraman, in regard to U.S. powertrain industries, funding for gear research is an area in the industry that could be improved.

“You can estimate the yearly gear manufacturing in North America to be in the order of $15-20 billion while the funds dedicated to gear research are not proportional to this,” Kahraman said. “The research that is happening is mostly shorter term advanced development or product development-type activities. Industrial funds going to U.S. universities for gear research are also very small, perhaps less than $5-10 million per year. As such, a small number of U.S. universities have researchers looking at gear research problems.”

Although there may never be enough funding for all of the R&D we’d like to see happening in this industry, great strides are being made by Kahraman and the Gearlab and people like them to advance gear manufacturing in the direction it needs to go.

“We continue to see an emphasis on gear system and gearbox efficiency as well as power density improvements that can be done in a cost-effective way,” Kahraman said. “The quality of gears produced, regardless of the sector, continues to improve, partly because wider use of hard grinding methods. As this allows one to tighten tolerances of gears, designing and optimizing gears at narrower tolerances is becoming more critical.”

Dr. Ulrich Prahl is the head of the Material Simulation Group in the Steel Institute at RWTH Aachen University where he conducts research on materials and production processes for gear components while focusing on steel and steel production processes, such as casting, forging, annealing, carburizing, machining, and application. Prahl also focuses on the interaction between these process, microstructure, and properties.

“We are working toward gaining an improved understanding of microstructure development during production as well as of the relationship between microstructure and properties and final performance,” Prahl said.

He is currently working on the design of new alloys and improving production strategies toward tailored properties and performance as well as an integral approach of combining rigorous modeling tools and experiments with an advanced microstructure evaluation. Therefore, the full production chain for gear components has been established within the RWTH Aachen University network on a laboratory scale from special steel melt production to final gear performance testing.

RWTH Aachen University has a long tradition of cooperation with the gear manufacturing industry, either in bilateral confidential projects or in publicly funded projects with industrial contribution and control. Like Kahraman, Prahl acknowledged that much of what he works on boils down to available funding.

There are various funding schemes that give support for research at universities focusing either fundamental or applied R&D topics, according to Prahl.

“Because of the increasing R&D demand in the wind industry, overall research in large gears has increased drastically,” Prahl said. “For example, Al-free steels with improved cleanliness is being developed to reduce probability of early failure.”

Sharing Prahl’s optimism, Kahraman also said he believes the need for R&D in gear manufacturing is in a position to grow.

“The key is that something tangible must come out of research to impact the bottom line of the company,” Kahraman said. “This has been the reason for the lack of funding for academic research. However, looking at the growth Gearlab experienced within the last decade and signs that gear researchers have been setting up labs in other universities in recent years, the outlook for industry-sponsored university gear research is bright.”