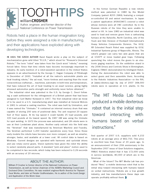 In 1921 the Czech author Karel Kapek wrote a play on the subject of mechanization gone wild titled “R.U.R.,” which stood for “Rossum’s Universal Robots.” The term robot- was taken from the Czech word “robota,” meaning forced labor. Since that time robots have become increasingly important to industry. An early mention of a robot-assisted operation in the United States appears in an advertisement by the George C. Hagan Company of Pittsburgh in December of 1930. “Installed at all the nation’s automobile plants are heat treating robots,” the ad read, “more tireless and exacting than the most conscientious craftsman… machines, automatic in both time and temperature, that have reduced the art of heat treating to an exact science, giving highly stressed automotive parts strength and uniformity never before obtained.”

The industrial robot was patented in the U.S. by George C. Devol following a cash settlement for the infringement of a British patent that had been assigned to Cyril Walter Kenward in 1957. The first industrial robot we know of to be used in a U.S. manufacturing plant was installed at General Motors in 1961 to unload a casting machine. The robot was built by Unimation, and it was named the “Unimate.” It contained an internal memory drum that was capable of storing 200 sets of positional data. The unit required 20 square feet of floor space. At its top speed it could handle 25 load pounds, and 100 load pounds at its lowest speed. By 1967 GM was using the Unimate for spot welding. In 1970 the process was automated, and 28 robots were in use at their Lordstown plant alone. Another early entrant into the field was the “Verstran” that was manufactured by American Machine and Foundry. The Verstran performed 1,200 transfer operations every hour. Since these early models the robots have become ever more compact, as well as smarter, stronger, faster, and available at a lower cost. All control data is based on Windows. Current designs are operated with harmonic and cycloidal drives and use rotary vector gears. Vision systems have given the robot the ability to select randomly placed parts. A standard “pick and place” motion used to be completed in two seconds, which today has been reduced to 0.29 seconds with an accuracy of 20 microns.

In the former German Republic a new robotic method was patented in 1980 by the Modul Company (patent #255 296A) featuring a computer-controlled tilt and swivel mechanism. In Japan a patent application (#3643967) covered a robot whose motions were all CNC controlled. As in the Russian robots of the time they were unable to swivel or tilt. In June 1983 an industrial robot was used to load and remove gears from a carburizing furnace at the Asheville, North Carolina, site of the Truck and Axle Division of Rockwell International’s Heavy Vehicles Components Division. The GCA/XR Extended Reach Robot was supplied by GCA/Industrial Systems group of Naperville, Illinois. The robot’s gripper can carry two axle gears that are at 1500ºF or move loaded gear trays. Following quenching the robot moves the gears to an electronic gaging machine. On the exhibition stand in the 2006 Drives and Controls Show in Birmingham, England, FANUC demonstrated its Intelligent Robot. During the demonstration the robot was able to select gears and then assemble them. According to the Robotic Industries Association—or the RIA, at [www.robotics.org]—by July of 2007 168,000 robots were in operation at U.S. plants. In the first quarter of 2007 U.S. suppliers sold 4,153 robots at an average price of $62,750. This price is one-third less than those of 20 years ago. In an announcement of their 25th anniversary in the September 2007 issue of Gear Solutions magazine, FANUC Robotics stated that it has 172,000 units in service worldwide, 80,000 of which are in the Americas.

What of the future? The MIT Media Lab has produced “Nexi,” a mobile dexterous robot that is the initial step toward interacting with humans based on verbal instructions. Robots are a true growth industry, and few manufacturers these days can operate profitably without them.