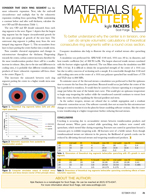 Consider that each ring segment has the same volumetric expansion. Next, take the mid-wall circumference and multiply that by the volumetric expansion resulting from quenching. While maintaining a constant before and after wall thickness, calculate the new OD and ID dimensions (Table 1).

The new OD and ID should mismatch from each ring segment to the next. Figure 1 depicts that the largest ring segment has the largest circumferential growth for the same percentage of growth of the next layer. The outermost ring segment is pulling away from the next integral ring segment (Figure 1). This accumulates from layer to layer putting the center further into a tensile stress.

Now consider chemical segregation and changes in microstructure throughout the thickness. Progressing towards the center, carbon content increases; therefore for the same transformation product there will be a smaller increase in volume. Also, due to the size and differences in cooling rates, it is probable that different transformation products of lower volumetric expansion will form closer to the center (Figure 2).

This increases the mismatch between each ring segment putting the center in a higher tensile stress state (Table 2).

A simulation was performed for AISI/SAE 4140 steel, 1016 mm (40 in.) in diameter, and heat transfer coefficient (htc) of 800 W/m2K. The largest observed tensile stresses correlated with the fracture origins typically observed. The von Mises stress from the simulation was 800 MPa (116 ksi). It is difficult to obtain the as-quenched strength of the center of a 1016 mm bar due to safety concerns of sectioning such a sample. It is conceivable though that 4140 steel with cooling rates seen at the center of a 1016 mm polymer quenched bar would have a UTS and YLD close to 800 MPa.

To minimize some of the thermal stresses a simulation was performed to find the optimum time to remove the bar from the quenchant. Removal would occur just before the center of the bar is predicted to transform. It would then be moved to a furnace operating at a temperature range just below the nose of the bainite start curve. This would give an optimum temperature to begin snap tempering the surface while the transformed material continues to extract heat from the center, thereby equalizing the thermal gradient and stress.

As the surface tempers, stresses are relaxed due to carbide segregation and a resultant volumetric contraction occurs. Our software currently does not account for this microstructure change or contraction but it is in the plans for future modeling software versions. Also the center is now transforming at a higher temperature further reducing thermal stresses.

Cracking is occurring due to accumulative stresses between transformation products and thermal stresses. When parts cracked while quenching, their surfaces were coated with quenchant, which turned blue during tempering. Fractures not coated in quenchant formed a common grey to reddish tempering scale. All fractures were of a brittle nature. Even though transformational stresses are inherent in the process, the likelihood of quench cracks can be reduced by alleviating thermal stresses and tempering transformed products.