From its beginnings in Prague more than a century ago, Havlik International has grown beyond its founder’s wildest dreams—while maintaining a connection to its home country.

The entrepreneurial spirit runs deep in the Havlik family — generations deep, in fact, according to John Havlik, Jr. “My great-great grandfather was a blacksmith, and my great-grandfather, Jan Havlik, started out making printing machines in Prague in the late 1800s,” he says. “Then he realized he could save money by manufacturing the gears he needed himself, so that was basically the beginning of Havlik International Machinery.”

Jerry Havlik took over the family business after his father, Jan’s, death in 1921. “In 1948, after communism fell, that’s when he decided it was time to leave the country,” Havlik says. Havlik’s grandfather relocated to Canada, where he found work in a machine shop, Williams Machines, which he eventually bought. Over the years he grew the company and split it into three divisions — True Forge, Material Processing, and Havlik Enterprises — which serviced the gear and aircraft industries, with customers including Boeing and McDonald Douglas, which were separate companies at the time. Havlik’s father, John Havlik, Sr., then decided to start his own company, Gear Craft, which also located in Cambridge, Ontario, and soon became the largest manufacturer of gears for all industries in Canada.

“My father was approached by Santasalo-SEW Eurodrive, which is one of the largest gearbox manufacturers in the world, and he decided to sell them the company,” says Havlik. “And while he stayed on with them for some time, he must have missed being in business for himself, because it wasn’t long before he started a new venture, Havlik International Machinery, which was established to sell machine tools.”

In the years since the company’s founding, it has grown in leaps and bounds — due, in part, to its longstanding relationship with TOS Celakovice, a company based in the Czech Republic that manufactures gear machines and lathes. Although Havlik International represents many other lines, it is the sole service agent in North America for TOS Celakovice, which it has worked with since the late 1930s.

The company’s relationship with its home country — the very ground to which its origins can be traced — doesn’t stop there. John Havlik, Sr., has returned to the Czech Republic, in fact, where he manages the Skoda Gear Company. “One of the things that my father and I are both doing with Skoda is helping them build good old North American know-how,” he says.

Havlik International, which recently moved into new facilities in Cambridge that include a 22-ton crane and a large showroom featuring new and used equipment, as well as its service department, has also created a new division called Havlik Gear. “The new division is the company’s gear-manufacturing arm,” says Havlik, Jr., who has been with the company for 20 years and recently took over its day-to-day operations. “Havlik Gear manufactures and rebuilds gear reducers for a variety of applications, including the steel industry, mining, pulp & paper, and material processing plants, among others. Our experience enables us to design and manufacture gears for virtually any industry.”

On the sales side, Havlik International Machinery continues providing new and used equipment to its North American customers, including the TOS Celakovice line of CNC gear hobbing and gear shaping machines and its line of CNC and conventional lathes. The company is also involved in marketing TOS remanufactured horizontal boring and milling machines, according to Havlik: “The used machines are remanufactured in the TOS plant to the original specifications, often with updated electronics,” he says. “Then they’re sold and serviced through Havlik International in Cambridge, with a new manufacturer’s warranty, and at a considerably lower price than that of a brand-new machine.”

Although Havlik is responsible for overseeing all aspects of the company’s North American operations, he often travels to the Czech Republic to visit with his father and scout machinery for his clients. Armed with a list of their specifications, Havlik relies on their many contacts in the European gear industry to find the perfect piece of used equipment for their customers. “Since we’ve worked in this industry for quite a while and know what they need, we’ll locate the equipment and then bid on it, doing our best to get them not only the right equipment, but the best price that we can,” he says. “Once we’ve found it, we’ll send them photographs and the specifications, but they’re mostly going on trust at that point. They don’t even get to see the machine, they just know that we stand behind what we sell.”

As far as the company has come over the past century–both in terms of geography and growth–Havlik says the best is yet to come. “As much as I enjoy all the detective work that’s necessary to find my customers the used equipment they need, the work we’re doing in the Havlik Gear division is equally exciting,” he says. “We’ve just purchased a large gear machine that’s capable of doing as large as 320-inch, for instance, so that’s going to add a lot to the jobs we’ll be able to tackle. And it all feels very comfortable for us to be getting back into actual gear manufacturing.

“These are very exciting times for the company,” says Havlik, “because we’re getting back into something that we’re really familiar with.” 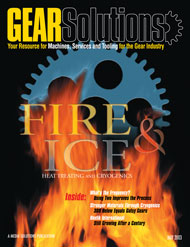