Just a few years away from celebrating its 100th anniversary, Kreiter Geartech continues to prosper as a world-class manufacturer of high-speed custom gearing.

Based in Houston, and founded in 1910, Kreiter Geartech has been closely associated with oil-field operations for nearly a century. And while that industry is still an important part of its business, the company made a conscious decision in the mid eighties to diversify its activities, specifically by focusing on high-speed gearing for compressors and gas and steam turbines, among other applications. Not only has that opened up new markets, it helped Kreiter Geartech to survive the recent economic downturn, according to T. Wayne Register, the company’s president.

“Oil-field work is very much like a sine curve,” he says. “When it’s good, it’s very good, but you know that it’s going to go away one of these days. We’ve lived and died with the ups and downs of the oil-field equipment market, and the idea of getting into high-speed gearing was to insulate us from those fluctuations. By diversifying our clientele, we’ve been able to weather the economic storm of the past few years better than others.”

That decision required a significant investment, however, and the company decided to put its money into purchasing an array of powerful and versatile Hofler grinders — two of them bought within the past 18 months. “We now have six grinders, up to and including the latest machine, which is a two-meter RAPID form grinder with external and internal grinding capabilities,” says Robert Collins, vice president and general manager. “In addition we have two one-meter NOVA generating grinders, a one-meter RAPID form grinder, an H1500, and an HR800R. We’ve also put in a very modern assembly building, and a test stand that allows us to load-test gearboxes up to 600 horsepower and 30,000 rpm.”

“We still do a lot of open gearing, which is for oil-field equipment, to a great extent,” Register adds, “but we made the determination that we wanted our growth to be in the area of high-speed gearing.”

These expanded capabilities have allowed the company to reach out to new markets around the country, but its customer base is by no means limited to the United States. Although the majority of its clients are found in this country, Kreiter Geartech has also done work for companies located in Latin America and Germany. Contacts are made through four in-house salespeople and a network of outside sales representatives. Once contact has been established, the company’s engineering staff works with the customer to determine their specific needs, designing their gears on state of the art computer software and providing 3D schematics prior to beginning production.

“We’re a custom gear manufacturer,” Collins explains, “so we don’t have a ‘product line,’ although we do build gearboxes that are designed to our customer’s exact specifications. We meet with the client to discuss their particular application — what they want built, how they want it produced, and what the end use will be. We’re dedicated to customer service, which begins long before the gears are actually manufactured.”

In addition, the company provides repair services, which includes design, engineering, re-rating, and rebuilding. “This has allowed us to broaden our relationship with the petrochemical and refining industries by helping them keep their plant and refinery equipment in top working order,” Register says.

Apart from these services, Kreiter Geartech has invested in keeping itself in top working order as well. Employing more than 60 people, and with some 100,000 square feet of workspace, the company is currently involved in expanding and renovating its administrative offices. It is also in the process of incorporating a new computerized operating system that will help streamline material flow and ensure prompt delivery to its customers.

“Everything we do is to make sure we’re able to meet our customer’s needs, if not exceed them,” Collins says. “They are the ones who drive our business, and we believe that if we respond to them to the best of our ability, then our reputation will grow along with our customer base.”

Register points out that the company’s ranks have recently grown in a way that he finds particularly satisfying. He is the second generation to man the company’s helm since his father, Tom, was hand chosen by founder R.F. Kreiter to take over on his retirement in 1960. He recently welcomed the third generation when his son, Matthew Register, joined Kreiter Geartech this past December.

“Matt is a graduate of West Point, and he was an infantry officer and captain who was deployed in both Afghanistan and Iraq,” Register says. “He’s out of the Army now and here making gears with us. He earned his degree in systems engineering, so we’ve started him out in that department.”

With such a long and rich history, some might be tempted to rest on their laurels and let their reputation speak for itself, but that’s not the case at Kreiter Geartech, according to Register. “Everybody lives on their reputation, and that’s certainly an important aspect of who we are,” he says. “But for our customers, it’s not about the fact that we’ve been around for nearly 100 years, it’s what we’ve accomplished over the past 10 years. And what we’ll be able to do for them in the coming years, as well.” 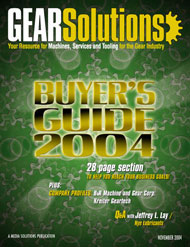