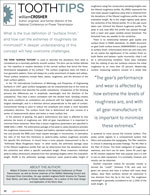 The term “surface texture” is used to describe the deviations from what is considered as a nominally perfectly smooth surface. The term can be further defined as “the repetitive or random deviation of the normal surface that forms the three-dimensional topography of the surface.” The surface roughness does not follow a true geometric pattern; there will always be a wide assortment of peaks and valleys. These surface variations include flaws, waves, roughness, and the direction of the main surface pattern.

In the 7th International Conference of Metrology and Properties of Engineering Surfaces in 1997, gear surface topography can be characterized due to the noise by three parameters that describe the profile undulations. Irrespective of the finishing process the differences are in amplitude, wavelength, and the direction of the undulations. They have a direct correlation with the decibel level. Grinding creates the worst conditions as undulations are produced with the highest amplitude, the longest wavelength, and in a direction almost perpendicular to the path of contact. Conventional honing is used to reduce the amplitude and create a more favorable undulation direction. The surface finish that is determined will also consist of a series of measurements above and below a mean surface line.

In the practice of gearing, the gear’s performance and wear is affected by how extreme the levels of roughness are. With all gear manufacture it is important to minimize these extremes. More than a dozen roughness parameters are specified in ASME B46.1-1995. The arithmetical average of the peak to valley deviations provides the roughness measurement. Compact and battery operated surface instruments of low cost provide the RMS (root mean square average) in microinches. In lubrication the ratio of the fluid film thickness to peak-to-valley surface roughness provides the specific film thickness. In recent times a more popular measurement is Ra, or “Arithmetic Mean Roughness Value.” In other words, the arithmetic average value of the filtered roughness profile that can be determined from the deviations above the centerline and within a specific evaluation length. Rmax (maximum individual peak-to-valley) dimensions obtained from five sampling lengths within the evaluation length. RzDIN is the arithmetic average maximum mean peak-to-valley height of roughness using five consecutive sampling lengths over the filtered roughness profile. Rq (RMS) represents the root mean square roughness value that is obtained from the deviations of the filtered roughness profile over the evaluation length. Rp is the single highest peak above the centerline of the filtered profile. Pc is the pak count taken over 10mmof the filtered roughness profile. The peak is only read after the profile has passed through both a lower and upper variable preset threshold. The threshold lines are parallel to the centerline.

There is no relationship between gear quality and surface finish in AGMA standards. An AGMA document on gear tooth surface texture (AGMA906A94) is a guide to surface finish. Unfortunately there are still many who do not realize the significance of the surface finish on tooth flanks and believe—quite incorrectly—that it will be a self-correcting condition. Tests have indicated that the rubbing of any two surfaces reduces the initial roughness by no more than 25 percent. Modern-day surface measuring systems consist of a probe that is powered to move across the involute surface. This probe sends signals to a computerized system that filters and evaluates the topography. The filter selection is critical in obtaining accurate findings. The M1 filter is the filter of choice. The three categories of roughness, waviness, and form can be seen. Some 40 years ago an RC resistor capacitor filter was popular, and it is still in use on older equipment. It is unreliable, however, and results can be distorted.

Another important criteria for accurate results is termed the “cutoff.” Sintered, P/M, and cast iron gears are porous and have a surface with many deep valleys. Gear flank surfaces should be measured in one direction from the tip to the root. The roughness wavelength is generally considered to be 1/20th of the tooth length. 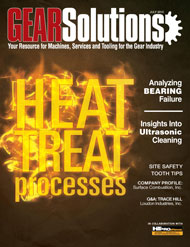