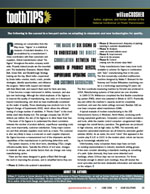 Continuing our conversation from the May issue, “Sigma” is a statistical measure of standard deviation. It is accomplished by a manufacturer’s close coordination with their customers and suppliers. Global manufacturers adopt “Six Sigma” throughout the entire company worldwide. Properly trained people are the essential part. The leadership Champion, Master Black Belt, Green Belt, and Breakthrough Strategy training are the key. Black belts—supervised by Green belts—mentor, teach, coach, provide strategies, identify opportunities, and influence the program. Yellow belts support and interact with their Black belt, and support their need for facts and data.

It has become a major instrument to define, measure, and analyze new technology. Although the initial emphasis of Six Sigma is to improve the quality of manufacturing, very early on it developed beyond manufacturing, and what we have traditionally considered as the realm of quality. Those developing new products turn to Six Sigma’s Design of Experiments (DOE), which allows the efficient testing of a large number of variables. A “Pareto Chart” is the most widely used data display tool. The average company has 35,000 defects per million; the aim of Six Sigma is to allow fewer than four.

The basis of Six Sigma is to understand the direct correlation between the number of product defects, superfluous operating costs and, most importantly, customer satisfaction. Today major customers and their principle suppliers must work as a team. The customer is also very likely to keep a scorecard on each supplier shipment. Six Sigma becomes a measurement tool of the shipments and the capabilities of the manufacturers in performing defect-free work.

The system requires, in the short term, identifying CTQs—single-critical-to-quality items. Typically the effects of tool wear, changes in material, set-ups, and similar factors that can change over many manufacturing cycles.

There are five steps designed to guide a Black Belt through the work in improving the process, and in simplified terms they are:

• Phase 1: Define (the customer’s expectations)
• Phase 2: Measurement (frequency of anything resulting in customer dissatisfaction)
• Phase 3: Analysis (when and where defects occur)
• Phase 4: Improvement (how to fix the process)
• Phase 5: Control (making sure the process stays fixed)

Today manufacturers have many more tools available to achieve Six Sigma in combination with “lean” manufacturing than in the past. The first numerically controlled multifunction machine designed by Walter F. Brainard for the Kearney and Trecker Milwaukee machining center is a technology approaching 50 years old. The first coordinate measuring machine by Ferranti was produced in 1959. Manufacturing systems of that period are now obsolete.

In 1969 D.T.N. Williamson completed the first flexible manufacturing system (FMS), which was patented in Britain in 1970. Practically any part within the machine’s capacity would be completely machined, and even the metal cuttings removed. Besides CAD we now have computer aided manufacture (CAM).

A typical example of modern manufacturing is the JCB Transmissions factory in Wrexham, North Wales, producing earth-moving equipment gearboxes. Computers control routine operations and tools, while the master control computer—programmed daily—manages the overall factory operation. The gearboxes are produced in high volumes, and at high value, by FMS. The assembly and inspection automated warehouse are all linked by automatic guided vehicles (AGVs). As an aside, the word “robot” first appeared in the London play R.U.R. in 1923. In the modern plant, robots are becoming an increasingly valuable tool.

Unfortunately, many companies these days have cut back on sending representatives to industry standards writing groups. A few even consider attending a standards meeting as something of a perk. Quite obviously, they have never attended such meetings, where 10-hour days are not uncommon. For those fortunate enough to attend such meetings, they will receive the most up-to-date and the best obtainable information and education on the subject.