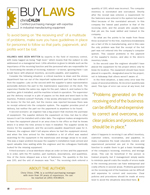 Volumes have been written by experts in the field of inventory control, with many tagged as being “high level,” which means that the subject is only addressed on a managerial level. Little attention is given to details such as the importance of the receiving function and the personnel who are responsible for it. Overlooking the details of receiving, however—or worse, ignoring them—can wreak havoc with physical inventory, accounts payable, and suppliers.

Consider the following situation: a critical machine is down and the stores department has run out of the important replacement part but has ordered it from the supplier. Late on the second shift the supplier’s sales representative personally delivers the part to the maintenance supervisor on the dock. The supervisor thanks the sales rep, signs for the part, takes it, and rushes to the machine, gets it installed, and the machine is back in operation. The supervisor put the delivery receipt in a pile of papers on his desk and went back to the machine. Problem solved? Partially. A few weeks afterward the supplier sends its invoice for the hot part, but the invoice was rejected because there was no receipt entered into the computer system. The supplier provides proof of delivery, but neither the part nor the paperwork is anywhere to be found.

A second scenario: an engineer has a big project that involves the purchase of equipment. The supplier delivers the equipment on time, but due to other issues it can’t be installed until a later date. The engineer makes arrangements to have the equipment placed in an area close to his office so that he knows where it is when the time arrives to have it installed. The supplier sends its invoice for the equipment, and the accounts payable department pays for it. However, the engineer didn’t tell anyone where he had the equipment stored, and when the time arrived for the installation a lot of effort was wasted searching for the equipment in the warehouse and storage areas to no avail. This was a major problem because the supplier’s installation team arrived and spent valuable time waiting while the engineer and his colleagues frantically looked for the missing equipment.

A third scenario: a local distributor ships an order on time and the paperwork is in order, with the PO number, part numbers, descriptions, and quantities. One of the items shipped was a box of fasteners. The quantity in the box was 100, and the unit of measure was “box.” The receiving clerk entered a quantity of 100, which was incorrect. The computer inventory is overstated and overvalued. Shortly after the receipt was entered, a requirement for the fasteners was entered in the system but wasn’t filled because of the overstated amount. In this company the lowest paid position is that of the receiving clerk, and the people who usually have that job are the least skilled and trained in the company.

So what are the points to be made from these three scenarios? In the first, machinery breakdowns are a fact of life in manufacturing, and in this case the only problem was that the receipt of the hot part was not entered into the company’s computer system. This caused problems in the payment of the supplier’s invoice, and also in the store’s inventory totals.

In the second case the engineer shouldn’t have placed the equipment for his project where only he knew its location. The equipment should have been placed in a specific, designated area for his project, not in hideaway that others weren’t aware of.

In the third situation, a data entry error was the cause of several problems. An incorrect quantity was used. This type of error can occur at any level, but when it happens in receiving it can affect inventory, customer orders, receivables, and payables. In many companies the least educated, trained, and experienced personnel are put in the receiving function to enable them to get a basic knowledge of the company’s receiving, inventory, and storage areas. This can be beneficial if the person is trained properly, but if management simply wants to minimize payroll costs the results of errors made in the receiving process can have widespread and costly effects in several areas. Problems generated on the receiving end of the business can be difficult and expensive to correct and overcome. Clear policies and procedures should be made at every level to avoid the situations described here.