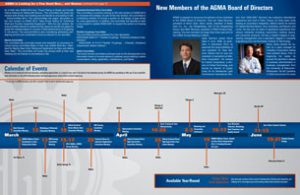 Thanks to the continued contributions of some of the great minds within the industry, AGMA continues with its main mission to develop technical standards and information sheets based on the latest developments within the industry. Throughout its nearly 100 year history, AGMA has always relied on the dedication and valuable contributions of its members participating in more than 25 various technical committees to carry out its mission. With well over eighty current standards and information sheets, AGMA continues helping the gearing industry worldwide.

Thanks to the recent advances in the Internet, especially in the area of virtual meetings, involvement in the activities of these technical committees are no longer geographically bound to a single location. Holding meetings online has allowed AGMA members from Europe, South America, India, and other parts of the world to attend and collaborate with their collogues on various issues including the development of new standards and information sheets.

The AGMA technical committees are always looking for new participation, which is open to all AGMA members free of charge.  Beyond contributing to the standards process, committee participation is a great way to network with your colleagues in the industry, and to learn from other experts that are part of the process.

The following is a brief outline of current activities within some of the AGMA Technical Committees.

Computer Programming Committee
The committee just recently released the new version of their popular Gear Rating Suite (v.3.0). The new version builds on the success of the previous version and offers new features including Mesh Visualization, which offers an animation of the designed teeth in mesh. The committee has begun work on developing software to perform load distribution factor (Cm Solve) and a new update to Bevel Gear Rating Suite.

Nomenclature Committee
The committee continues development of the next version of AGMA 1010, the popular standard that defines failure modes, including review and modification of the terminology and descriptions and addition of new enhanced color photographs.

Lubrication
The committee has become active again and will be discussing the U.S. position on the systematic review of ISO 14635-2 and will start discussion on the future of ANSI/AGMA 9005, which will be up for reaffirmation in 2013

Cutting Tools Committee
The committee recently concluded review and resolution of comments received during Committee Ballot of their new AGMA 1102-Bxx “Tolerance Specification for Gear Hobs.” The committee will review the revised draft at their next meeting and will decide on proceeding to GB. For their next project the committee is planning on a new standard on “milling cutters.”

Sound & Vibration Committee
The committee continues their work on an information sheet on condition monitoring and diagnostics for gears and gear units. This is one of the AGMA technical committees with regular Web meetings attended by members from France and Argentina.

Mill Gearing Committee
The committee has two subcommittees:
Subcommittee 6015: This subcommittee recently concluded review and resolution of comments received during Committee Ballot of their new AGMA 6015-Axx “Power Rating of Single and Double Helical Gearing for Rolling Mill Service.” The committee will review the revised draft at their next meeting and will decide on proceeding to GB.

Subcommittee 6014: This subcommittee has begun discussion on the next revision of AGMA 6014 “Gear Power Rating for Cylindrical Shell and Trunnion Supported Equipment.” With the new revision, the subcommittee intends to update the Sat values for ductile iron gears for grade M2 material based on a review of field performance of DI gearing in mill service. The subcommittee is also considering addressing self-aligning pinions and combination drives as relevant to the standard.

Marine Committee
The committee has concluded review and resolution of comments received during Committee Ballot of their new AGMA 6032-Bxx “Standard for Marine Gear Units: Rating and Application for Spur and Helical Gear Teeth.” The committee will review the revised draft at their next meeting and will decide on proceeding to GB.

Industrial Enclosed Drive Committee
This committee is currently working on the next revision of AGMA 6013 on enclosed drive design. As part of the new revision, the committee is considering whether to include a section on the design of gear drives for crane applications. In addition, the committee has decided to start a new project to update AGMA 6001 to expand the section on housing design.

Spline Committee
This newly formed committee continues work on the development of an information sheet on involute splines to address issues relating to spline nomenclature, rating, application, maintenance, and failure.

Dean Burrows joined Nixon Gear in June, 2008, as president. In December, 2010, he assumed the responsibilities of vice president for Gear Motions. Before that he was vice president of operations at Marietta Corporation. He worked for Carrier Corporation, a division of United Technology, and served as director of supply chain for its Residential Light Commercial International Division from 2000-2007. Burrows has extensive international experience and lived in Paris, France, for three years while leading an acquisition integration. Before Carrier he worked for Delphi/General Motors, Acro Industries, and Bausch and Lomb. He has over 25 years of operations experience from various industries including: automotive, medical device, and consumer products. He has a master’s degree in engineering management and a bachelor’s degree in industrial engineering from the Rochester Institute of Technology.

Steve Janke started his career as a sales manager for Castalloy Corporation selling heat-resistant alloys. Prior to beginning his career he earned his bachelor’s degree in business administration in business management from the University of Wisconsin-Whitewater. He left Castalloy in 2000 and joined the sales team at Signicast Corporation. While there he earned his MBA from the University of Wisconsin-Milwaukee. In January 2005 he purchased Brelie Gear Company. He has been actively involved with the AGMA since 2007. Married for 12 years to wife Jodi, they have two children, Megan (eight) and Kyle (six).

Jan Klingelnberg studied industrial management at Carnegie Mellon University in Pittsburgh, Pennsylvania. He then worked with the Beteiligungsgesellschaft Aachener Region in Germany; SMS Demag AG in Germany, and ZF Passau GmbH in Brazil and the United States. In 2002 he became manager business unit cylindrical gears of the family business in Germany and in 2003 managing director before taking on the role of CEO of the Klingenlberg Group in 2004. He is married to Monica and they have two daughters, Anna Maria and Lara.

Mark Michaud, president of REM Surface Engineering, is a leading expert in the field of isotropic superfinishing of engineered metal components. During his 35-year career at REM he has worked in research, operations, sales, and management. He has been granted over 100 patents, published numerous technical articles, and has given lectures in the U.S., Europe, and Asia. He currently travels the world focusing on superfinishing in power generation, automotive, aerospace, and medical applications. Michaud has degrees in chemistry from Reed College and an MBA from the University of Hartford. Married for 32 years to his wife Louise, they live in Texas and have two grown sons: one is a professor of Latin and classics, and the other is director of operations for REM.

AGMA would also like to thank outgoing board members Jim Bregi of Doppler Gear; Robert Phillips of the Gleason Cutting Tools Corp.; and Kyle Seymour of Xtek, Inc., for their years of service to AGMA and the industry.

Make Getting Involved With AGMA Technical Committees One of Your 2014...

Looking Ahead: The AGMA Foundation’s Future

2020: A clear vision for providing the standard in service for...