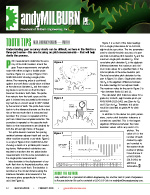 Pitch measurements determine the accuracy of the tooth locations around the gear. These measurements are typically made with either a single or double probe machine. Figure 1 is a copy of Figure 3 from AGMA 915-1-A02 showing a single probe device. The measuring probe is positioned against any tooth flank, usually about mid face at the tolerance diameter dT, and the measuring device is set to zero so that this flank becomes the datum tooth flank. The probe then retracts from the tooth space and the gear is indexed very accurately by the measuring machine an amount equal to 360ƒ divided by the number of teeth. The probe then moves back in to the tolerance diameter and the location of the next tooth flank is measured and recorded. This process is repeated until the part has rotated one complete revolution. The procedure is repeated on the opposite tooth flanks so that measurements are obtained for both the left and right flanks of the gear.

Two probe devices measure the spacing variation between adjacent teeth and can be either machine mounted or portable. Figure 2 is a copy of Figure 6 from AGMA 915-1-A02 showing a sketch of a portable pitch measuring device. Mathematical calculations are required to transform the two probe device measurements into the same parameters as the single probe measurements.

Index deviation is the displacement of any tooth flank from its theoretical position, relative to a datum tooth flank. The deviation is recorded as the circular distance along the tolerance diameter circle measured in the transverse plane perpendicular to the part axis (Figure 1).

The calculated pitch tolerance values for a grade A4, 18-tooth, eight-module pinion per ANSI/AGMA 2015-1-A01 are 19µm for FpT and 5.5µm for fptT. Therefore, this pinion would be classified as grade A4 for pitch accuracy.

In addition to the above two pitch parameters, sector pitch deviation tolerance is sometimes specified. This is the largest algebraic difference between the index deviation values within any sector of k pitches. The value of k is the number of teeth divided by eight and rounded to the nearest whole number of pitches. Consult Annex E of ANSI/AGMA 2015-1-A01 for additional information.