Mercedes-Benz is using angular hypoid bevel gearsets for its all-wheel drive powertrains, and testing them is the job of Gleason’s new 360AT Universal Gear Tester.

It seems that Mercedes-Benz design engineers never stop searching for ways to improve performance, passenger safety, and comfort. The recent availability of new lightweight, smooth, and highly-compact all-wheel drive (AWD) powertrain systems on their venerable C-, E-, and S-Class vehicles, for example, falls into the performance category. At the same time Mercedes designers have sought to improve passenger safety by moving the engine back a bit to enlarge the front energy-absorbing crumple zone. They’ve even lowered the front end of the new models so that pedestrians would sustain less-severe injuries if struck at low to moderate speeds. 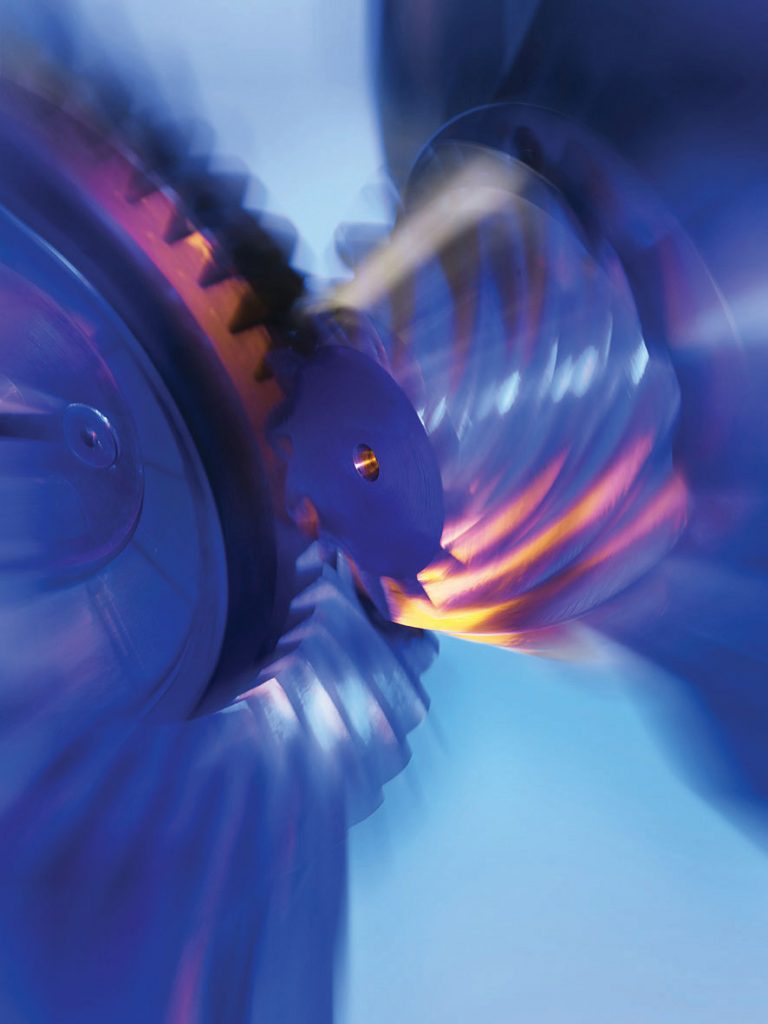 Amazingly, Mercedes has figured out how to do all of the above without having a negative impact on either space or comfort in the passenger compartment. Their AWD powertrain systems feature an angular (non 90°) hypoid bevel gearset in the front differential. The use of a hypoid bevel gearset means, of course, that the input pinion can be positioned lower than the axis of the ring gear of the differential, thus minimizing the protrusion into the passenger compartment. But, in addition, the long-shafted input pinion makes a direct run from the transfer case at the back of the transmission back up to the front axle differential. This direct run is on an angle—a diagonal “short cut” that provides a much more compact arrangement than would be required by a conventional 90° gearset. The traditionally cylindrical gear elements in the transfer case become angular, as well, and can be produced with either cylindrical or bevel hypoid technology. Either way the Gleason 360AT Universal Gear Tester offers full single flank (SFT) encoder-based motion transmission error testing and structure-borne noise (SBN) testing capability for both of these low angle gearsets. 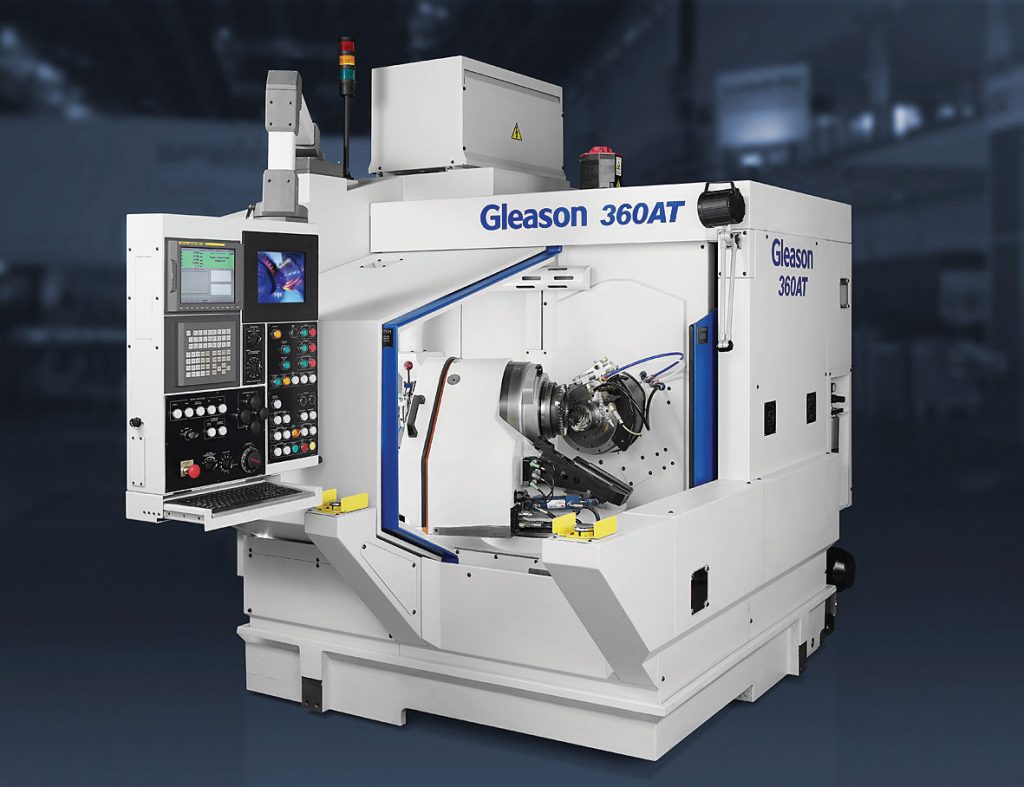 Of the some 1.1-million gearboxes produced annually at Mercedes-Benz’s Untertuerkeim facility in Germany, around 90,000 include angular bevel gearsets for use in all-wheel drive systems. Some are used to fulfill the worldwide production requirements for the very highest end of the automobile spectrum: Mercedes’ new SLR McLaren roadster—hailed by one journalist as “the greatest car ever built”—and the Maybach, one of the most luxurious and expensive cars in the history of automobile production. Most of these 90,000 angular bevel gearsets will ultimately be put through a rigorous, thorough, and completely automated quality testing process for noise, contact pattern, and single-flank transmission error on the only gear tester offering such a wide angular testing capability: the Gleason® 360AT Universal Gear Tester.

“We have very experienced operators perform a 100-percent subjective noise and contact pattern check on the 90° bevel gearsets used in the rear-wheel drives, along with a lot of older Gleason testers to perform additional tests,” Mercedes-Benz’s Stefan Keisers explains, “but for the angular gearsets there is only one tester that can meet all of our requirements and test gearsets with such wide angles. Today Gleason’s new 360AT is performing tests on about 240 angular bevel gearsets per shift, with angles ranging from 90° to 83°. It’s helping us meet the added demand for the highest quality angular bevel gearsets, which have become an increasingly important part of our product portfolio.” 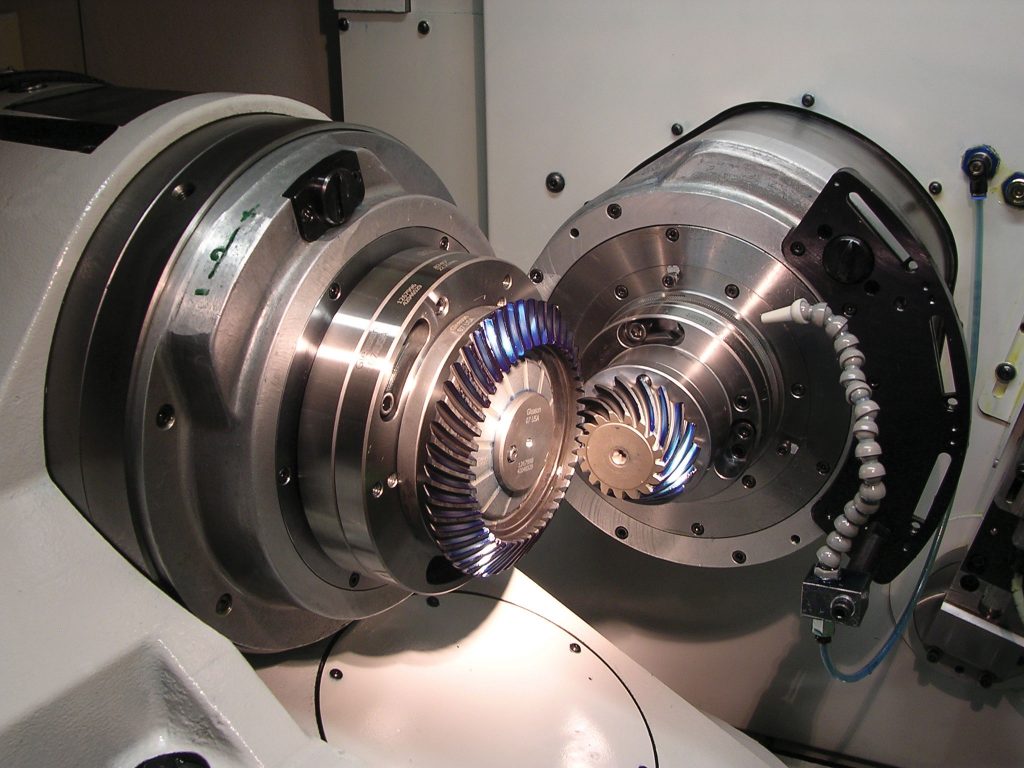 The 360AT Universal Gear Tester is the only product of its kind that can perform the full range of pattern checking and SFT/SBN testing on any bevel gearset with the widest possible range of angles. Unlike competitive testers, or the Gleason testers that have come before it, the 360AT can be equipped with a CNC-controlled pivoting gearhead that can swing from 65° to 185°, thus enabling it to precisely mesh pinion and ring gears of varying angles and types, and even cylindrical gears—both parallel axis and off-angle.

According to Gleason Chief Research and Design Engineer Bill McGlasson, the new 360AT design also makes day-to-day functions such as setup, operation, and “jogging” much simpler and more intuitive—despite the added complexity of testing an angular gearset—because the operator relates to the machine through “virtual” gearset-based axes rather than typical X-Y-Z-B machine axes. “It’s particularly awkward for an operator to try to manipulate the machine axes through a range of angular motion with just X, Y, and Z references,” he says, explaining that the 360AT’s user interface instead uses V (virtual offset), H (pinion cone), G (gear cone), and A (alpha) that translate into virtual gearset axes the operator can better understand and work with. A FANUC 180i CNC controller and Windows-based software not only provides the horsepower for this unique “virtual” capability, but also makes more mundane functions like manual roll checks, cycle setup, and V&H testing that much easier for the operator. 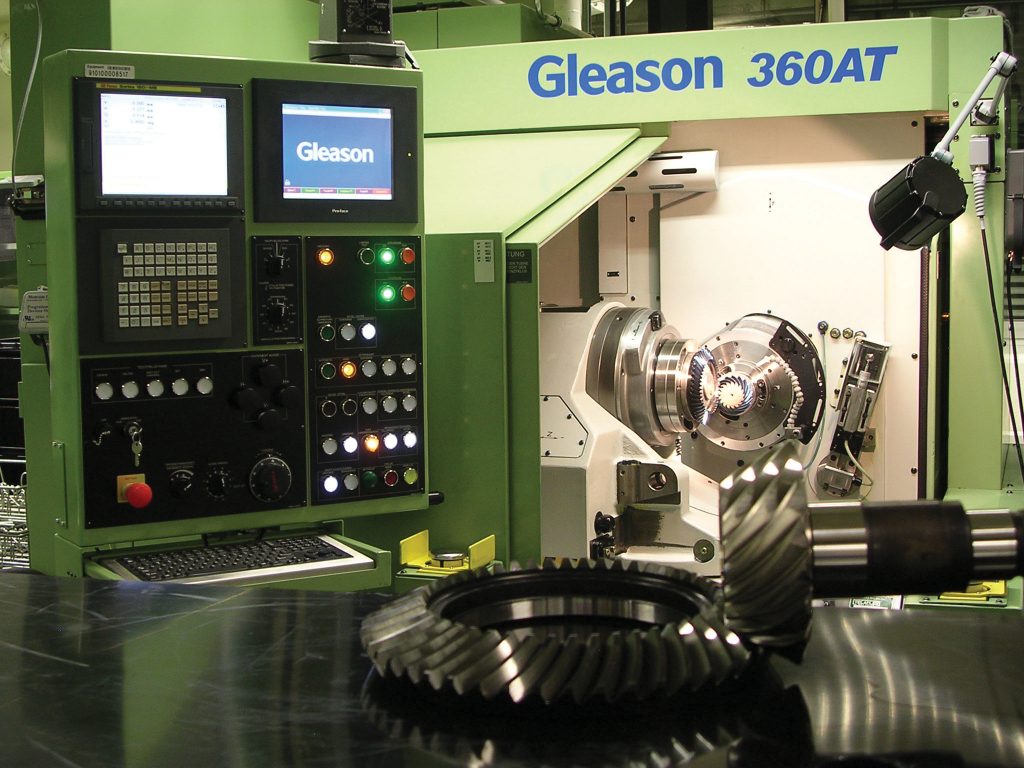 The 360AT is particularly well suited to meet the demands of a high production environment like that of Mercedes-Benz’s Untertuerkeim facility, where several hundred gearsets are tested on the machine per shift. To this end it features automatic pinion head height measurement over the center; a direct-drive, high-speed 3,000 rpm pinion spindle; and a magnetically compliant gear spindle for optimal gearset rolling dynamic properties. These last two features maintain measurement quality of the single-flank (SFT) encoder-based motion transmission error testing at testing speeds considerably faster than those possible on other machines. Mercedes-Benz uses the SFT test for all its angular gear production, and also to augment the subjective noise testing of 90° gearsets with SFT spot checks. In addition, structure-born noise (SBN) testing is used to help find the root cause of any problems that might be detected in day-to-day production.

The 360AT can also be equipped with Gleason’s latest tool-less arbor quick-change workholding system, which can take upwards of 15 minutes out of changeover time between gearset models. The complete gear or pinion arbor is installed in the spindle with just a simple insert and twist. Seating and ejection are automatic, all without using a single tool or bolt.

While the 360AT is fast, that doesn’t come at the expense of precision, says McGlasson. “The new tester is equipped, for example, with a lightweight spring-loaded quill mechanism that brings the gear and pinion softly into mesh,” he says. “Conventional systems instead use heavy springs on a full machine slide, increasing both force and mass for meshing, slowing feedrates and also running the risk of tooth edge damage. The 360AT is fast, but very gentle.” 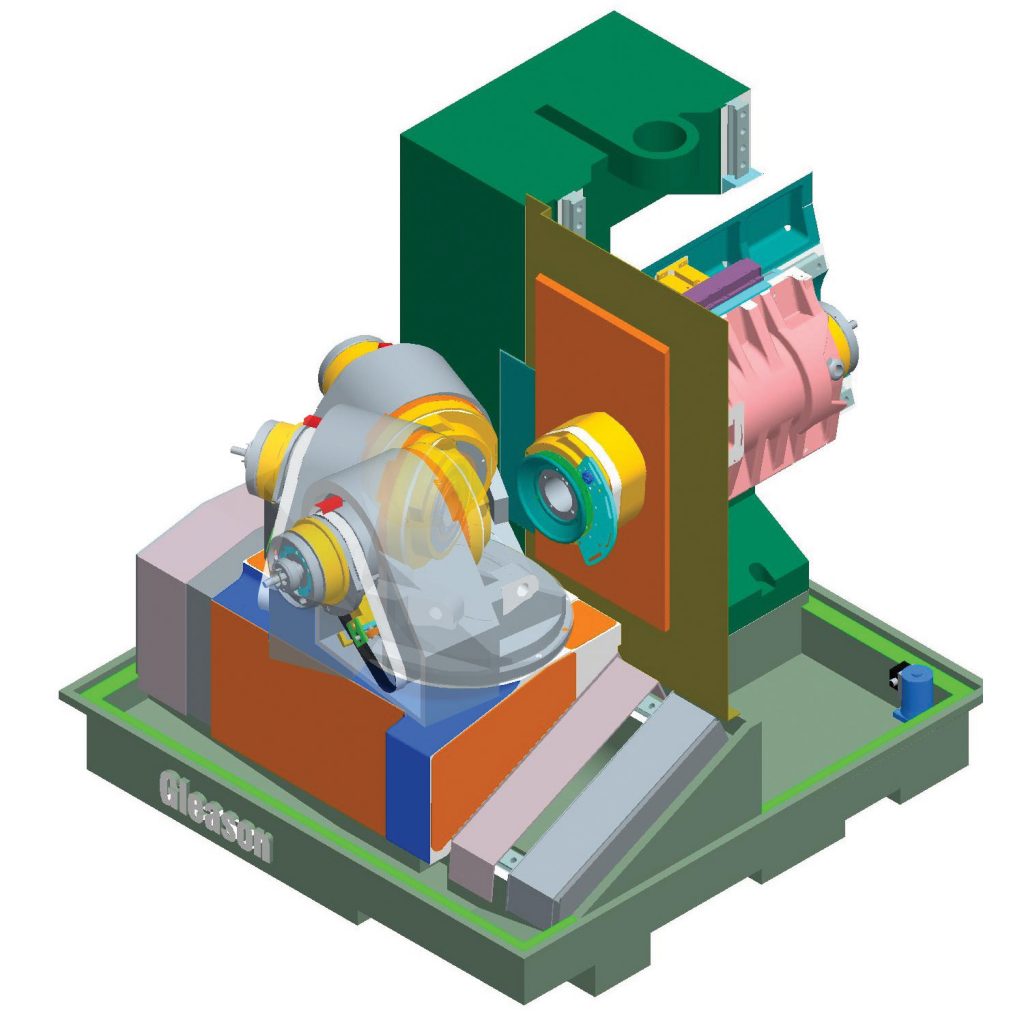 In addition, at the busy Untertuerkeim facility where floorspace is at a premium, the compact size and particularly large and accessible test chamber are greatly appreciated by both plant management and the operators.
Load/unload is manual, and the large sliding doors, test chamber, and long axes travels make it easier for the operator to quickly load and unload gears of any size and geometry (accommodating gear diameters up to 360 mm, and pinion shaft lengths of more than 600 mm).

“With the help of the nearby Gleason service and support personnel in Ludwigsburg, we’ve been able to quickly integrate the 360AT into our production environment to meet our increased angular bevel gearset volume requirements,” Keisers concludes. “It is a natural extension to the Gleason PHOENIX II machines we currently use for ‘power-dry’ cutting and hard gear finishing. It fits right in.”

A Crowning Achievement for Automotive Applications

It is critical to understand every aspect of the application for...