Home Features Lead or Helix? That is the Question

Whether you call it lead or helix, this aspect of gearing is critical to the function of the finished components. Learn more from an industry expert.

Here’s the scenario: the company is developing a new application for helical internal gears. The first trials are going well, but after heat treat studies it is determined that the lead needs to be changed by .025mm to compensate for heat treat distortion. Not a problem, according to the broach supplier. They make the requested change to the broach and return it to the customer two weeks later.

When the manufacturing engineer looks at the inspection report for the first piece off the broach he sighs, puts his hand on his forehead, and shakes his head. You guessed it—they corrected the broach the exact amount requested, but in the wrong direction! Production is supposed to start next week, and the re-regrind of the stick will take two weeks. Now the engineer has to explain to his boss why they will be late. By the way, they are being charged for both regrinds on the broach. 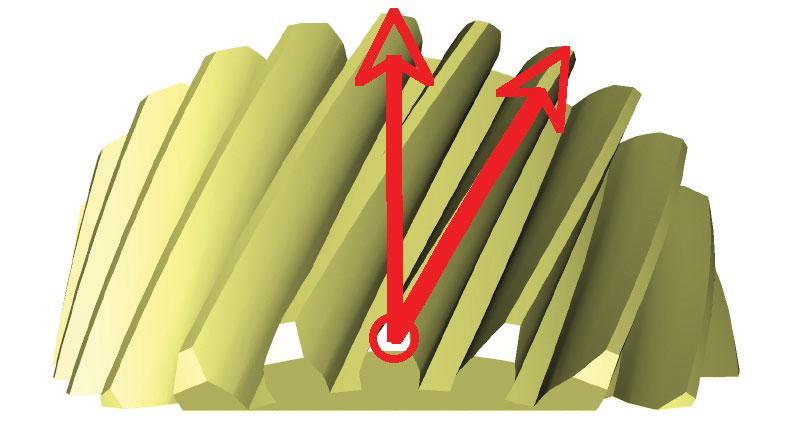 But wait, there’s more. The new helical master gears have arrived, just in time for composite testing of the first green components. The first results seem suspicious. After a review of the certification documents from the master gear supplier you decide to check the master on your analytical gear checker. You remember that the results of the heat treat study required a .020mm correction to the helix to compensate for distortion in heat treat. The master is .020mm from nominal, but—again—in the wrong direction!

Just in time to make your week complete, you get the test results back on that special project you’ve been working on. The net forged gears, with the modified “lead,” were installed and tested in the assembly. The test engineer’s comments concluded with the phrase “Then it blew up.” After your investigation you determine that when you asked for .030mm plus helix, the supplier made it .030 plus lead.

How could this happen? Isn’t it simple?

Whether you call it lead, helix, or even tooth alignment, this aspect of gear quality is critical to the function of the finished components. Despite the existence of standards and the efforts of many people, this part of gear-making and inspection is still causing problems and costing companies time and money.

Let’s look at the terminology to gain a clear perspective on what “lead” and “helix” really are. The helix angle, according to the AGMA 1012-G05 Gear Nomenclature publication, is “the angle between any helix and an axial line on its cylinder. In helical gears and worms, it is at the standard pitch circle unless otherwise specified.”

When the helix is inspected, the deviation from nominal is charted. The traces on the inspection chart trend the same direction as the metal. If the left flank of a gear is sloping more left than nominal it is said to have a plus helix. Conversely, if the flank is right of nominal, it has minus helix (see Figure 1a-b).

Looking at the gear from the perspective of lead changes the polarity of the error in some situations. “Lead” is the advance of the helix through one revolution, and given as a linear dimension. For example, a gear may have a lead of 25mm (see Figure 2). 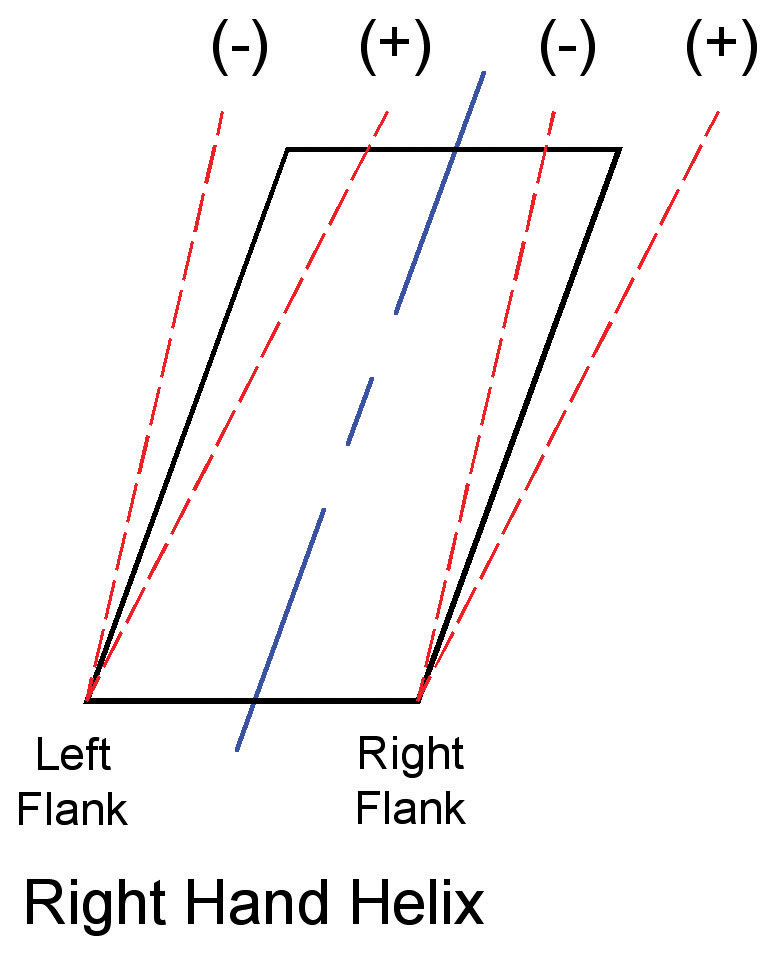 Now, just to make sure this is more confusing than necessary, when we measure the gear with an analytical gear inspection machine we refer to the measurement as either “lead” or “helix,” then proceed to give the results in units of neither helix angle nor a deviation from the nominal lead value. For example, if a gear has a nominal helix angle of 20° and a resulting lead of 750mm, one might expect the helix measurement to be in units of degrees, and the lead measurement in terms of millimeters. For instance, 20.01° of helix, or 750.5mm of lead.

Of course, we do nothing of the sort. The measurement is commonly reported as “angle error,” “slope,” or sometimes “lead error.” This is a case of having to “know what they mean in order to know what is meant.” The deviation is generally reported as the amount of deviation across the analyzed face width. The real confusion comes when evaluating the numerical analysis. The sign of the deviation would change from positive to negative in several situations if you changed from lead to helix or vice versa. If the inspection chart is evaluating helix, and the person evaluating the chart is thinking in lead, an expensive problem may be about to happen.

What to do? It is recommended that your company utilize the convention of an established standard, and to clearly state that on all gear drawings. DIN, AGMA 2015, and ISO all use helix, so it would be a clear advantage for you to do so as well. If you prefer to use lead, then be specific. Don’t leave it to chance.

Oh, by the way, anybody out there want to buy some beautiful master gears? They’ve only been used once…