Gleason’s newly designed Phoenix 280C bevel gear cutting machine is faster and easier to use than ever before, providing dependability and boosting productivity.

Gleason revolutionized bevel gear production in 1989 with the introduction of the first fully CNC controlled cutting machine, called the Phoenix® 250HC. In 2001 the Phoenix II was introduced, featuring a breakthrough monolithic column design that optimized dry machining, significantly reduced floor space requirements, and greatly improved cycle times. Now, with the introduction of the third generation of Phoenix technology and the 280C bevel gear cutting machine, bevel gear manufacturers again stand to benefit from a host of new features and capabilities. For automotive manufacturers requiring faster production of today’s higher-quality, quieter-running gearsets, the 280C delivers significantly shorter cycle times. For precision job shops producing gears in smaller lot sizes where more flexibility is desirable, the 280C enables them to change over from one part type to the next in a fraction of the time it would normally take. And for any user the new design makes the 280C among the easiest of machines to operate and maintain day to day. The following article provides an in-depth look at the 280C’s new design features and capabilities.

CNC controls, powerful direct-drive motors for high-speed cutter and work spindles, and new cutter system designs have all combined in recent years to make significant improvements in overall machine cycle times. Improvements in these areas going forward, however, will likely be incremental. That’s why Gleason engineers have increasingly focused on essentially the last remaining area where significant cycle time savings can still be made today: nonproductive time. With the introduction of the Phoenix II in 2001, Gleason took a small bite out of nonproductive time with a new monolithic column design and pivoting cutter head that put the cutter and workpiece in closer proximity, thus shortening machine motions. But the new Phoenix design goes much further. In addition to a monolithic design, the 280C also features:

Chamfering in parallel to cutting: Chamfering has traditionally been a significant challenge in bevel gear production because after cutting chamfering generally requires that the gear be removed and loaded into a separate chamfering machine or, on some machines, done on the machine but sequentially to cutting, thus adding to overall cycle time. But the 280C design completely eliminates the time normally required for chamfering. The machine is equipped with an auxiliary chamfering spindle that allows a part to be chamfered in parallel to a part being cut. Even time-consuming chamfering of both the toe and heel of the gear can be easily completed without adding to cycle time. (Figure 1)

Automated parts load/unload: The 280C is additionally equipped with a high-speed parts loader that automates the process of moving ring gears and pinions from the cutting spindle to the chamfering station. The double-gripper design enables the loader to simultaneously grip, and then exchange parts, in as little as five to seven seconds. (Figure 2)

Quick-change tooling: In an increasing number of production environments, batch sizes have gradually become smaller to better meet fast-changing customer demand, shorter delivery schedules, and reductions in inventory. With the 280C considerable effort has been focused on simplifying the often slow, tedious process of changing over both the cutter system and the workholding to accommodate new part numbers. As a result the 280C is the first machine of its kind with a hydraulic cutter change mechanism that completely eliminates tooling. Instead of using wrenches and special parts for cutter removal, the 280C operator can quickly and easily remove and replace a cutter system with the touch of a button, in a fraction of the time and effort. When it comes to making a workholding change on the work spindle, the 280C similarly simplifies and speeds the process for the operator by enabling him to remove the workholding from the front of the machine without the use of any tools, rather than the typical process of first accessing the back of the machine and using special tooling to remove a series of fasteners. (Figure 3)

As completely dry machining has become more common, so too has the need for improving thermal stability and dry chip containment. The 280C’s monolithic column design enables hot dry chips to easily fall completely clear of the machine structure into a simple chip conveyor, in a work chamber that’s remarkably free of exposed rails, wires, or hoses. The thermal effect of the chips on the machine structure, and their impact on day-to-day maintenance, is greatly reduced. The monolithic column is also cast from a polymer composite material rather than typical cast iron, making it exceptionally stiff and rigid with very high thermal stability ideal for completely dry machining. In addition, the 280C features a simplified guarding design that makes it easier for maintenance personnel to access service areas. New features like a servo door system with robust rails further improves reliability, as compared to conventional pneumatic door systems. (Figure 4)

In the development of the 280C, Gleason software and control engineers also recognized the need for a powerful but simple and extremely user-friendly operator interface. This would help empower a new generation of even less-experienced operators and enable them to easily optimize the full range of bevel gear processes, whether face milling, face hobbing, or straight bevel gear cutting. The use of a new Gleason “Global Software Platform,” in conjunction with Siemens 840D CNC controls or Fanuc 30i and running in a familiar and highly intuitive Windows environment, has put a wide range of powerful capabilities right at the fingertips of any operator. For example, they can quickly create and modify the ideal program for any gear using a menu-driven data entry session with parameters already defined. Then, during production, operators benefit for a dynamic display showing all the most critical information they need to manage and, if necessary, improve every aspect of the process. In addition, a diagnostics screen continuously displays the status of components where a problem is most likely to occur and then provides easy access to materials needed to troubleshoot or help make repairs, thus solving many problems before they result in significant downtime. (Figure 5) 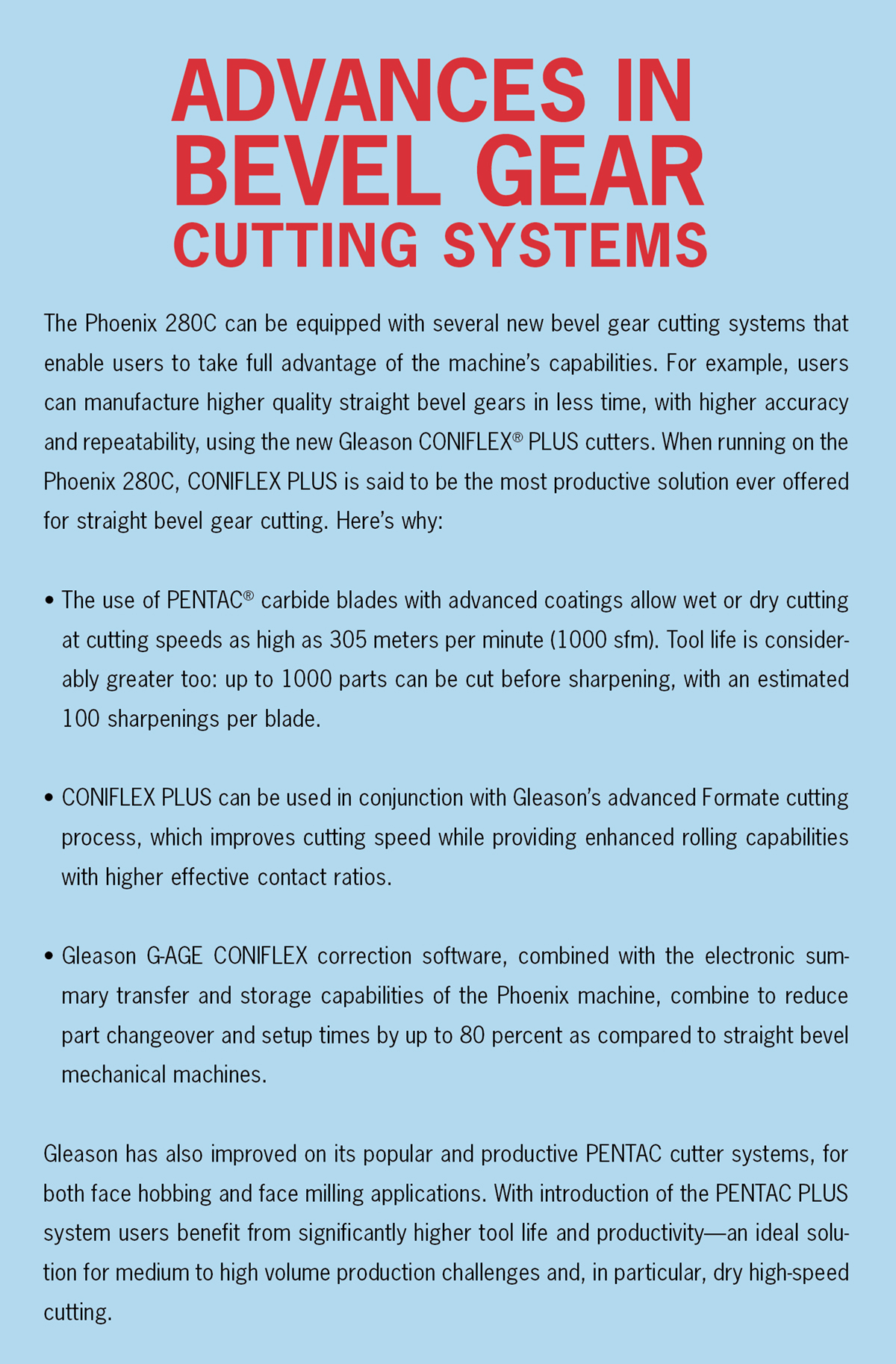