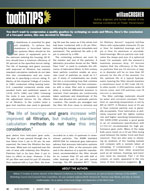 Oil cleanliness is essential for gear unit reliability. To achieve this cleanliness in force-feed lubrication systems filters should be the last piece of equipment prior to the lubricant entering the housing. All filters should have a minimum efficiency of 90 percent at the specified micron rating. The life of bearings and gears increase with improved oil filtration, but industry standard calculation methods do not take this into consideration and are somewhat lax in specifying a micron rating. R. Bachu, at the Imperial College of London, in 1981 conducted rolling bearing tests. S.H. Lowenthal conducted similar independent tests and published papers in 1978, 1979, 1980, and 1982. Following the tests it was possible to calculate life adjustment factors for the effects of oil filtration. In the London tests a gear test machine was used to generate gear debris from helicopter gear units. The gear oil was passed through one to four filters from 1 μm to 40 μm. As was expected, the lower the filtration the less the wear. What was not expected was the rate of wear with relatively fine filtration. Particles had to be less than 3 μm to have no effect on wear. However, if the 40 μm filter was used for just 30 minutes then replaced with a 3 μm filter, the bearing life was the same as if the whole test had been conducted with a 40 μm filter, indicating the damage was immediate and permanent. The predicted life with a 40 μm is reduced by a fifth.

The contacting surfaces are worn by the number and size of the particles. A laboratory procedure known as the “Multi Pass Test” is used to evaluate the efficiency of lubrication filters. In this century laser particle counters enable an accurate count of particles as small as 0.7 μm. A slurry of contaminants are slowly fed into a recirculating loop that contains the filter being tested. The test commences with a clean filter and is completed when a terminal differential pressure is reached. Fluid samples are continuously taken upstream and downstream of the filter and directed into automatic particle counters. The results are averaged over the filter life from clean to terminal and recorded as a ratio of upstream to downstream particles. The AGMA standard #9005-D94 for industrial gear lubrication advises that pressure lubrication systems should have a filter on the pressure side and in the absence of a specific manufacturers recommendation the filter should be no coarser than 50 μm with ball or roller bearings and 25 μm with journal bearings. The API standard #677 “Units for Refinery Service” required full-flow filters with replaceable elements 25 μm or finer for babbited bearings and 10 μm or finer for aluminum or microbabbited bearings. Micron particle size indicates the shape and size of a spherical bead. For example, with the element’s maximum pressure drop, 10 microns implies that the efficiency of the filter on particles that are 10 microns or larger in diameter will be no less than 90 percent for the life of the element. For the optimum life of a typical hydrodynamic bearing the filter should maintain a cleanliness level of ISO Code 18/14. In other words, 2,000 particles under IS micron sizes, and 100 particles over IS microns is desirable.

The filter cartridge materials should be water and corrosion resistant. Their limit on operating temperature is set by API at 160ºF. A filtration level of 25 μm or finer nominal particle size is generally acceptable. Finer lubrication is definitely required with the lighter turbine oils and higher operating temperatures. ISO 4406:1999 provides a good guide to an oil cleanliness specification with 17/15/12 recommended for high performance gear units. Many of the large bulk users insist on a 10 μm filter being used between the tanker truck and their reservoir. They are also wise in obtaining an analysis of the loading sample and compare with a sample taken at unloading. If contaminants > 1.0ppm are discovered then other properties such as air release, foaming, and emulsion must be checked. Part I of this column, on seals, appeared in the July issue of Gear Solutions magazine.