Faced with ever-increasing horsepower and torque requirements, in conjunction with size constraints, High Performance Gear (HPG) began investigating ways to maximize the capacity of transaxle designs while maintaining the original gearbox castings. This led to the conclusion that the gears used would need to be stronger, not larger.

An area of particular interest to HPG is the final drive crown wheel and pinion. This spiral bevel gearset is subject to the highest torque and shock loads and is a potentially limiting factor in design. The company was using a face-milled and ground-tooth design at the time, made from aircraft-quality materials, and it began focusing on the tooth geometry system to determine if any improvements could be made to increase strength. 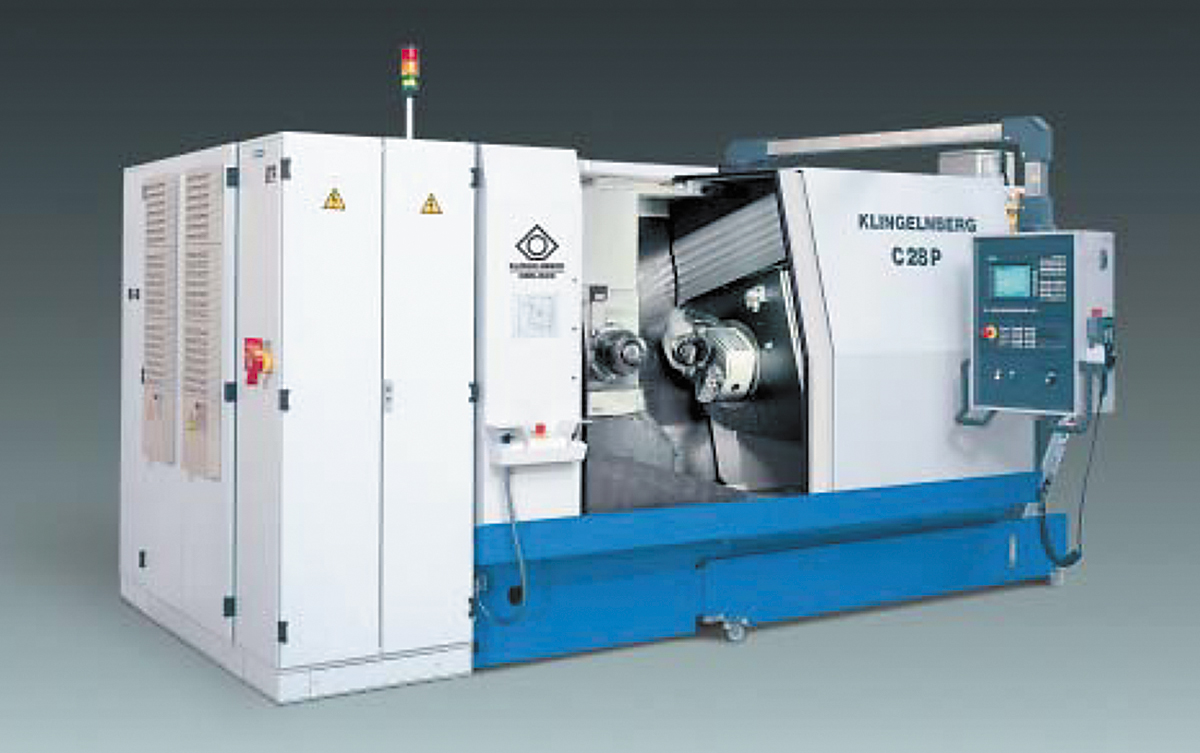 After extensive research, consulting with a number of experts in the field, and considering all available methods of manufacture, HPG concluded that improvements could be made by utilizing the technology that many racing teams and a number of European sports-car manufacturers use. For this, the company turned to the experts at Klingelnberg, in H¸ckeswagen, Germany, developers of the palloid cutting system. Largely unknown in the U.S. and – until now – unavailable from North American gear producers, this tooth form system provides the highest possible power density in combination with the lowest sensitivity to gear box deflections. HPG decided to invest in the state-of-the-art equipment necessary to produce these top-flight gears: a Klingelnberg C28P CNC Palloid bevel cutting machine, with closed-loop feedback from a Klingelnberg P40 Gear Checker.

The majority of aftermarket rings and pinions are still made according to designs standardized in the 1950s – the “glory days” of the American automobile. While these gearsets are inherently strong because of extremely large hypoid offsets and robust cast iron housings, they suffer from high efficiency losses due to the strong longitudinal sliding action of the mesh engagement. This tradeoff between strength and efficiency can be minimized with hypoid gearsets manufactured according to the palloid system. 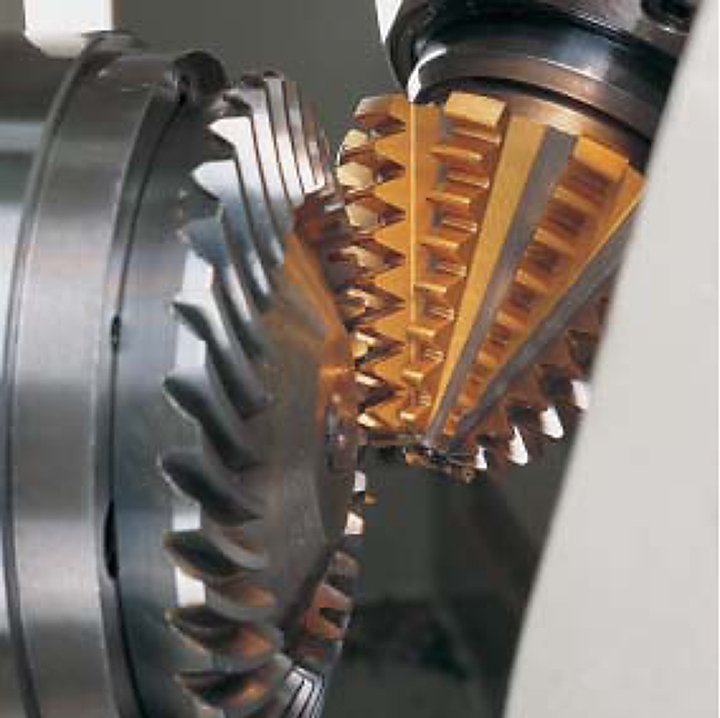 In North America, most manufacturers of spiral bevel and hypoid gears adhere to the tapered tooth depth system, or “face-milling.” While well-proven gears of this design can be made on machines commonly available on the used-equipment market, they may not be optimal for every bevel gear application – especially when high-power density is a requirement. Grinding the flanks and root fillets can markedly increase the power density of face-milled gearsets, but with a corresponding increase in manufacturing costs. Palloid gearsets can exceed ground-tooth gearsets’ load capacities, while still using lapping as the only hard-finishing process.

The palloid method features a conical hob generating both the ring and the pinion. The cutting action may seem alien to most experienced U.S. spiral bevel gear shops at first, but it soon becomes clear that the motion is actually very similar to a helical gear hobbing operation. This helps to explain the primary advantage of the palloid system, which is the involute lengthwise curvature of the gear teeth. In most cases, tapered-tooth parts have a circular arc for their lengthwise tooth curvature. Most parallel tooth depth gearsets are face-hobbed (continuous indexing), which results in an epicycloid (extended hypocycloid) lengthwise tooth curvature. Face-milling and face-hobbing designs both approximate an involute curvature along the length of the tooth, and sometimes very closely. But the palloid system is the only spiral bevel manufacturing system that generates an exact involute tooth curvature along the entire face width. 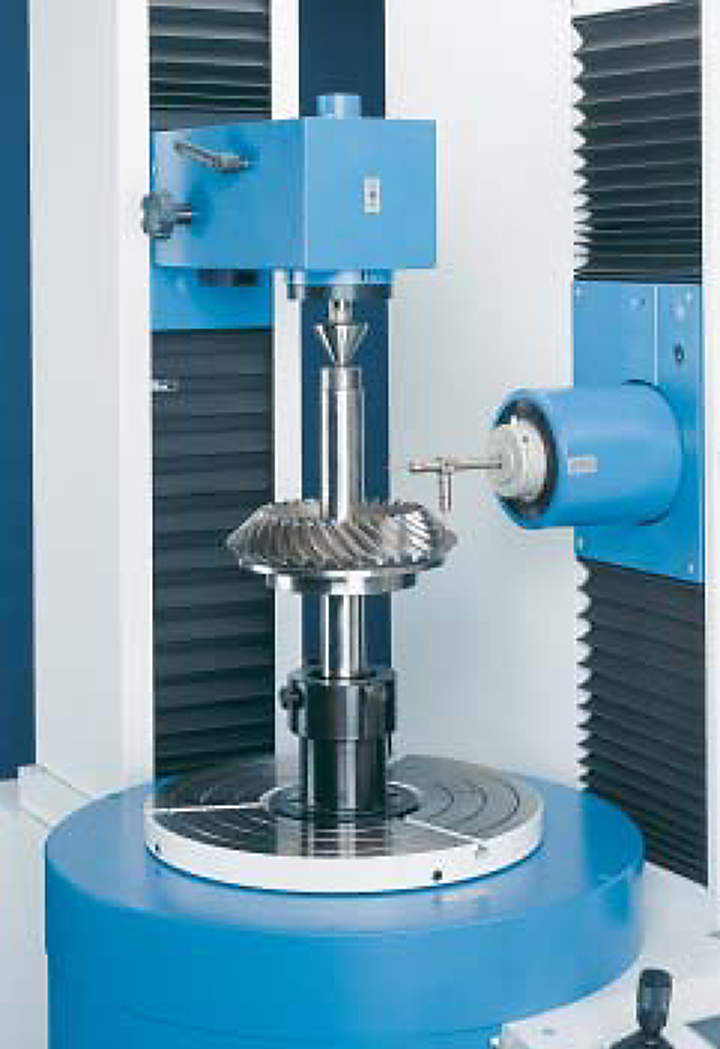 An involute tooth form, as any “gear head” will attest, is insensitive to variations in center distance. This gives palloid gearsets their great resistance to displacement, whether as a result of assembly tolerances or deflections under load. V and H settings for toe and heel contact pattern positions are typically much higher for palloid gearsets (e.g. 1.5-2.5x greater). The palloid system has an almost ideal combination of characteristics – both from the standpoint of performance as well as manufacturability – for application to high-performance hypoid gearsets.

Both face-milling and face-hobbing operations use a cutter head, where the blades are set protruding from the “face” of the cutter. This necessitates additional accessory cutter preparation in order to produce gearsets. Blade grinding machines, cutter truing stands and fixtures, and the cutter bodies and various blades themselves are all required during the manufacturing process, whether owned in-house or outsourced. Here lies another important advantage of the palloid system: When a palloid hob is dull, it is quickly and simply resharpened, much like a hob used for spur or helical gears. Mounting the tool in the cutting machine occurs via a cone with both taper and shoulder contact. Also, like the standardization of hobs by diametral pitch, palloid hobs come in standard pitches. A single pair of hobs (one left-hand, one right hand) can be used to cut many different gearsets, provided they are all designed with the same module. This means that a performance gear manufacturer does not need a large and expensive tooling inventory to produce a wide variety of gearsets. 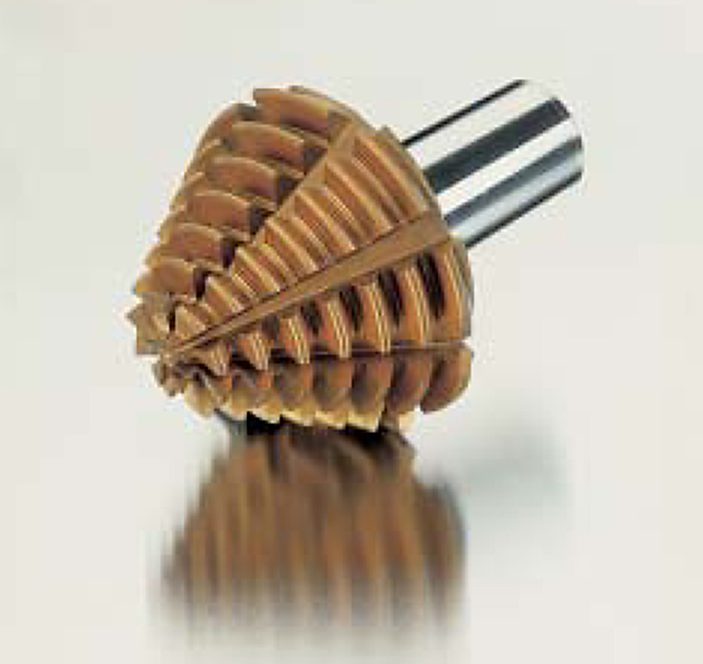 The economical benefit of using a tapered hob also gives another performance advantage to palloid gearsets in that the root fillet radius can be manufactured significantly larger than with a conventional face-milled or face-hobbed gear. In the most extreme case, this allows for a single radius encompassing the entire root. This larger root radius significantly decreases the tooth root bending stress.

Here, a brief history of the palloid system might be helpful. The system was originally developed in 1910, and it went into production at the Klingelnberg plant in Germany shortly thereafter – where it is still used today. One of the traditional drawbacks of the system was longer cutting times than face-milling or face-hobbing required. While this is less of a concern for custom jobs and small-lot production, it precluded larger acceptance of the palloid system in high-volume production. This explains the lack of awareness of this method in North America, where most spiral-bevel and hypoid-gear technology is derived from experience gained in automotive mass production.

However, even this shortcoming has been largely eliminated via the introduction of modern CNC to this near century-old system. Auxiliary movements have been optimized, drastically reducing all non-cutting cycle time, while high-precision spindle synchronization allows the hob to maintain a constant cutting speed as it generates from the wide base of the hob to the narrow tip. Some representative cutting times are shown in Table 1. As the chart suggests, high-performance automotive axle gearing is not the sole application of the palloid method. Miter gearsets, outboard marine drives, and enclosed right-angle drives can all benefit from the increased power density the palloid system provides.

By investing in palloid technology, HPG has positioned itself to provide high-quality spiral bevel and hypoid gearing for its transaxle designs, and for the overall gear market. With a process suitable for producing a single gearset, or thousands of them, and a strategy to increase capacity to supply the needs of the North American market, palloid technology will prove to be a profitable addition to HPG’s existing cylindrical gear manufacturing capability. 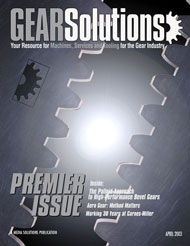 Women in manufacturing: Diversifying the industry