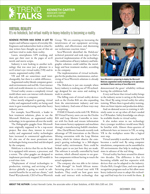 Science fiction has done a lot to inspire and influence aspects of everyday life. Engineers and industrialists look to what fiction writers have thought up out of thin air and have tried to make them reality.

Lasers, smartphones, GPS tracking, and more got their start in the pages of sci-fi novels and movie scripts.

Industry is now looking to another technology that was once just a glimmer in a sci-fi writer’s eye: virtual reality (VR) and its cousin, augmented reality (AR).

VR and AR are sometimes used interchangeably, but there is a subtle difference.

Virtual reality creates a completely virtual world where users can interact with elements that only exist in a computer.

Once mostly relegated to gaming, virtual reality and augmented reality are being used more in gear manufacturing and other heavy industry areas.

For example, Seco/Warwick, a leader in heat treatment solutions, plans to use the Microsoft HoloLens, an augmented reality technology, in its operations all over the world. 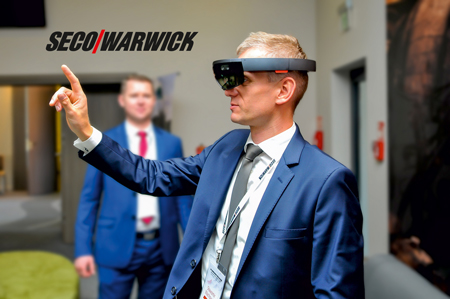 The Holographic goggles from Microsoft were originally supposed to be a top-secret project. But since then, interest in virtual reality and augmented reality technologies have increased in commercial applications. It’s also one of the most prominent new technologies being researched and developed by the company.

HoloLens is a device that fits on the head. It is equipped with sensors, a processor, and a screen. The cyber goggles are designed to implement previously mapped 3D models in a real-time view.

“Deployment of virtual technologies to production, training, and servicing of our devices globally is going to result in substantial benefits for us and our clients,” said Paweł Wyrzykowski, CEO of Seco/Warwick Group. "We are counting on increasing the intuitiveness of our equipment servicing, mobility, and effectiveness and shortening our technicians reaction times.”

Seco/Warwick identified the HoloLens’ technical potential and took steps to find a practical implementation of the technology. The combination of heavy industry and holographic solutions could redefine the metallurgy and heat treatment market, according to the company.

The implementation of virtual technologies for the production, maintenance, and servicing of Seco/Warwick solutions is already a reality.

The HoloLens is just one example where heavy industry is making use of VR technology designed for one arena and making it work in another.

The falling costs of virtual reality devices such as the Oculus Rift are also expanding from the entertainment industry and into heavy industry. And some of those ways may be surprising.

ITAMCO found a niche with VR. With its 3D Virtual Factory, users can use the Oculus Rift and Leap Motion Controller to interact with live feeds and stream information from remote factory equipment and machines through a manufacturing forklift simulator.

Also, David Brown Santasalo recently took advantage of VR innovations at the Electra Mining convention with the Leap Motion device, which let visitors observe the company’s gearing technology in a 360-degree virtual reality environment. Parts could be broken apart to see just how they are made. The software is actually controlled by hand motions, which allowed anyone to see gearbox components without having to touch the actual equipment.

The company also was able to let visitors “walk through” its South African manufacturing plant in a virtual tour with VR headsets. They could see how gears were made and interact with technology that demonstrated the gears’ reliability without leaving the exhibition hall.

And on-demand access to training is infinitely easier to set up when all that’s needed is a VR headset. Safety knowledge can always be available thanks to virtual reality.

It also makes sense to use technology that a younger workforce would more likely be familiar with. Almost three-quarters of millennials have an interest in VR, so using VR in the workplace seems like a logical next step.

Virtual assembly is another area where VR becomes a useful tool. By using computer simulations, components can be assembled in 3D environments that help in making decisions in advance of the real thing.

Virtual reality has been around for almost two decades. The difference is that it’s becoming reliable and less expensive with devices that can be adapted to the industry. Ocular Rift, Google Glass, and even speech recognition programs such as Siri allow more heavy industrial areas to adopt this technology and find ways for it to work for them.