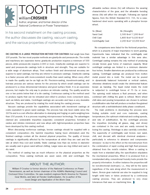 Die casting is a large production method for castings that weigh less than 100 pounds. The two most popular methods are gravity-die and pressure-die. The molds and machinery are expensive items: gravity-die production requires a minimum of 500 pieces, while pressure-die requires 2,000 or more. Gravity-die castings are superior to sand and pressure-die castings both in structure and strength. They are suitable for a wide range of aluminum alloys. Their surface finish and dimensional accuracy are superior to sand castings, but they are inferior to pressure castings. Gravity-die casting is a faster process with more-consistent results than sand casting. When every effort is made the quality can be as high as A9. Precision-casting, investment-casting, and lost-wax process are various names for the process by which small castings can be produced to a close dimensional tolerance and good surface finish. It is an expensive process, but maybe the only way to produce an intricate casting. The quality would be one or two points below that of a die casting. Continuous casting is the method used to produce ingots that can be reheated and rolled to produce more convenient sizes, such as billets and slabs. Centrifugal castings are accurate and have a very desirable structure. They are produced by rotating the mold during the casting process.

Vacuum castings provide the capabilities associated with investment castings at costs equivalent to green sand castings. The process has only been viable since the 1970s and is a cost effective alternative to stamping and forging on parts weighing less than 150 pounds. It is a process requiring microprocessor technology. The advantages claimed are: undesirable impurities evaporate; consistent properties; formation of oxides and nitrides minimized; and new alloys with high-temperature properties have been developed by this casting method.

When discussing nonferrous castings, bronze castings should be supplied with a consistent composition—the harmful impurities having been eliminated—and the finished castings contain all the desired physical properties. The quality of bronze castings is significantly affected by the temperature at which they are cast and the rate at which they cool and solidify. Static castings less than six inches in diameter are usually cast in green sand without chilling. Larger sizes are ring chilled and cast in dry sand.

The method of casting has as much influence on the physical properties as the composition. Three casting methods are used: sand, chill, and centrifugal. The allowable surface stress (Sc) will influence the wearing characteristics of the gear, and the allowable bending stress (Sb) will affect the strength. Following are typical figures, from the British Standard B.S. 721, for a case-hardened steel worm operating with a phosphor bronze wheel.

No comparisons were listed for the frictional properties, which is a property of major importance to worm gearing. Experiments have indicated that the centrifugally cast material has a similar advantage in this area also. Centrifugal casting remains the only method of producing circular bronze gear forms of maximum capacity. Most centrifugal castings are limited to a minimum diameter four inches. Smaller diameters are produced by continuous casting. Centrifugal castings are produced from molten metal poured into a mold. The metal can be poured in dynamically balanced horizontal or vertical casters, otherwise vibrations would create the detrimental feature known as banding. The liquid metal inside the mold is subjected to centrifugal forces of 75 Gs or more. The spinning mold induces a fluid pressure, and when combined with chilling the grain is refined. Worm wheel chill rates and pouring temperature are chosen to achieve a solidification rate that will produce a medium fine-grained structure with a well-distributed delta phase constituent.

The main problems in developing the process were finding suitable mold and core materials, casting temperatures, the optimum rotational and cooling speeds, and rate of solidification. By the centrifugal process the impurities (including all gases, slag, and dross) are contained in the core and are easily removed by boring the casting. Shrinkage is also carefully controlled. The superiority of centrifugally cast bronze over sand, chill, and die-cast with identical chemical analyses—particularly in reference to abrasion and compressive stresses—is due to the effect on the microstructure from the combination of rapid cooling and high fluid pressure obtained from the mold’s rotation. When a casting is made from a standard alloy, the specification stipulates the mechanical properties. When it is produced from a nonstandard alloy, conventional foundry tests provide the property information. In either instance the properties will be non-directional (isotropic); i.e., they will be the same regardless of the axis along which the measurement is taken. Bronze gear material can also be supplied in long length solid bars or tubes produced by a continuous casting process. They are produced to very close tolerances that save on machining time.