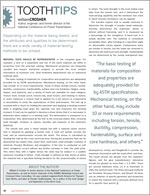 Material tests should be representative of the complete gear. For example, a test on a separately cast bar of the same material can differ in properties from the principal casting. Mechanical properties are frequently variable and require statistical analysis to provide the most reliable information at minimum cost. Heat treatment departments rely on statistical methods daily.

The basic testing of materials for composition and properties are adequately provided for by ASTM specifications. Mechanical testing, on the other hand, may include 10 or more requirements. Some of these include torsion, tensile, ductility, compression, hardenability, surface and core hardness, fatigue, creep, impact, and elasticity, and a variety of tests are available for each category. Torsion tests include proof, torsion-only, axial torsion, and twisting to failure. In some instances a torsion load is applied for a set period on components or assemblies to verify the expectations of their performance. The test rig is mounted with a chuck for holding the specimen and applying a twisting moment while a weighing head grips the opposite end and measures the twisting moment. A load can be applied to develop a shear stress that it is necessary to determine when subject to a twisting load. The deformation is measured on a troptometer. Also determined by the test is the torsional elastic limit, torsional yield strength, modulus of rupture, ductility, and measure of the material’s plasticity.

The tensile test uses a metal sample bar with a reduced center section that is sheared by applying a tensile load. A load cell system records the load, and an extensiometer records the strain. The stress is calculated by dividing the load by the cross sectional area. Among the properties that can be determined are elastic limit, strain limit, yield point, yield strength, modulus of elasticity (Young’s Modulus), and elongation. If the test is conducted on soft steel, elongation occurs without any further increase in load, the yield point. This infers that, with a higher stress the steel may be subject to a sudden extension resulting in failure. Yield strength is defined as that stress at which the material has a specified limiting deviation for the proportionality of stress to strain. The yield strength is the most widely used data from the tensile test, and it determines the load-carrying capability and the minimum size crack to which fracture mechanics can be applied.

The transfer rupture test is usually reserved to determine the strength of powder metal materials. Ductility determines the materials’ ability to deform without fracturing, and it is measured as a percentage by the elongation. A bend test is a simple ductility test. The material is considered acceptable when, after bending at a specified angle no discernable cracks appear. Compression tests are similar to tensile, but the loads are reversed to determine the yield point and strength. Hardenability can be determined by the Jominy end-quench test, developed by Jominy and Boegehold to provide the maximum information with the least effort and time. The result should not deviate from the suppliers’ figures, and the gear manufacturers’ laboratory should not deviate by more than ± 1.5 HRC. There are several hardness tests, so it is important to state the method used. The three principal methods are Rockwell, Knoops/Vickers, and Brinell. All three use an indenter of specific geometry and properties to indent the material with a precisely defined force for a specific time period.