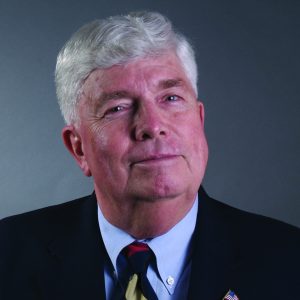 Bison is celebrating its 50th year. Tell us about its background and how you came to man the helm.

The company was founded in 1960 by three mechanical engineers who took the first letter of their last names—B, S, and N—to create our name. They began by designing custom gearboxes, among other things, and eventually started focusing on gearmotors.

I came to know their products when I was employed by W.W. Grainger as its product manager for power transmission. Grainger is still our largest customer, in fact, and we private label our gearmotors for them under the Dayton name. I had earned a degree in engineering systems analysis, which is a discipline of aerospace engineering, from Wright State University in 1971, and after working for a number of companies, including TRW/Globe Industries and Robbins & Myers, I was recruited by Bob Diebold of Diebold Manufacturing, which had purchased Bison Gear in 1971, to join the company as its vice president of marketing and engineering.

My plan was to work my way up to general manager within five years, but that happened in a little more than two, and I eventually found myself with the opportunity to purchase the company in a leveraged buyout. So I partnered with my father, Norman Bullock, who is also a mechanical engineer, and we purchased Bison Gear & Engineering in 1987.

It’s interesting that you first learned about Bison on the supply side, and then as an employee. Had you always wanted to own your own business?

Yes, I think I’d had that in mind from an early age, and while I was working for Bison I really came to appreciate its potential. I had come to know the Diebold family as friends, and I will always be grateful for their support. And maybe it’s my engineering background that led me to place such a premium on efficiency, but I knew that I wanted to introduce processes such as lean manufacturing and cutting-edge technologies from the very beginning.

So we embraced that concept during the last recession in 2001, and it has worked very well for us. And our growth has been pretty remarkable. We had 40 employees when I purchased the company in 1987, and we now have more than 200. I’ve always believed that you derive marketing strength through product strength, and I think that devotion to quality is a large part of the reason we’ve since become a global entity.

Have you found that your background as an engineer has contributed to your management style?

It really has. You can’t improve what you’re not measuring, after all, so I think our focus on engineering has made us particularly adept at establishing internal benchmarks that have allowed us to deliver on our philosophy of continuous improvement. One of my proudest accomplishments over the years has been maintaining a ratio of one out of seven of our new hires having some sort of engineering diploma, which means that approximately 15 percent of our employees are trained engineers. That bolsters our reputation as a company that’s truly dedicated to innovation and precision.

What is your outlook on the company’s position as we begin to emerge from this most-recent economic downturn?

Some years ago I found myself so busy that I was conducting our board meetings by phone while I was shaving in the morning, so I realized that it was time to bring in some new people. I assembled an external advisory board, consisting of experts such as Bob Bergman, a past president of the AGMA, to help identify and recruit a top-notch management team. Thanks to their expertise we are now poised to grow the business on an ongoing basis, and we have some spectacular products that will soon be introduced to the market.

Thanks to their leadership, along with processes such as lean manufacturing and technologies including Kanban inventory systems, we’re in position not only to deliver the highest-quality gearmotors, but to do so in a way that meets our customers’ increasingly tight time horizons. We’ve invested in state of the art equipment to allow us to meet the fluctuating demand curve that we see from our customers so that they can be competitive and responsive in their own endeavors. By focusing on their needs, we feel that we’ll remain an important partner.