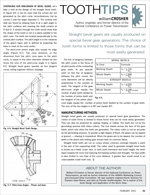 Continuing our discussion of bevel gears, let’s take a look at the design of the straight bevel tooth. In Figure 1, it can be seen that the curves are not generated by the pitch circle circumferences, but by curves C and the larger diameter C. The centers and radii are found by drawing lines B at a right angle to the pitch surfaces and meeting the shaft centers at D and D. A section through the tooth would show that the shape of the tooth is not in a plane parallel to the pitch cone. The teeth are located perpendicular to the conical pitch surface. The pitch angle is is the measure of the gear’s taper, and is defined by projecting the lines to meet at the cone center.

The cone distance, or the dimension from the pitch cone apex to the pitch circle, is equal to the pitch diameter divided by two times the sine of the pitch-cone angle A in Figure 3. Straight bevel gears operate as two tangent cones rolling together without slippage.

Straight bevel gears are usually produced on special bevel gear generators. The choice of tooth forms is limited to those forms that can be most easily generated. They can also be produced by casting, forging, or milling. The teeth are cut by the generating process with rotary cutters. The tool travels across the face of the gear blank, which rolls when the teeth are generated. The rotary cutter is not as accurate as the generating process. To provide a high degree of finish, the gears can be lapped or ground — shaving is impractical. When the gears are to be lapped, the number of teeth in the pinion and mating gear should have no common factor.

Straight bevel teeth are cut on cones whose contours converge towards a point in the axis of the supporting shaft. The cutter used to generate straight bevel teeth is known as a basic crown rack. In both tooth thickness and tooth height, the teeth taper towards the inner end reducing the bearing surface and strength. The face width is also limited to one third of the cone distance. A greater face would result in an unacceptable small tooth size.