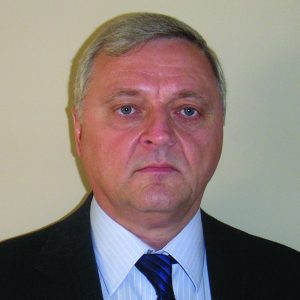 For the manufacturing purpose, a simplified approach can be used for the development of the CAD models of the gear and the pinion in the right-angle bevel gear set under consideration.  This approach is based on the schematic shown in Figure 1.

Use of the discussed approach enables one to develop CAD models of the gear and the pinion in the right-angle bevel gear set (Figure 3).

The developed CAD models were used for rapid prototyping (plastic models of the gear and the pinion for the right-angle bevel gear set are illustrated in Figure 5) and also was converted to a G-code for cutting bevel gears of the proposed design on a five-axis NC machine (Figure 6).

Preliminary results of testing of the geometrically accurate bevel gears

Contact pattern. Before running a contact pattern test, the contact geometry of the bevel gears of the developed design was investigated in comparison to that of the similar gear set cut using Gleason method of gear generating. The comparison is performed based on the developed CAD models.

These two types of the contact patch convince us that, geometrically, the gear and the pinion tooth flanks make contact at a distinct point and not a line.  Because of the point contact, contact stresses in the vicinity of the contact points are always increased.Point contact between the tooth flanks of bevel gears cut by Gleason method is the result of violation of the second and the third conditions listed at the beginning of the paper. The violation of the second and the third conditions occur because the geometry of the tooth flank of the imaginary crown rack generated by the cutting edges of the face milling cutter deviates from that of the desirable imaginary crown rack.  In cases of gears with a large tooth count these deviations are usually small and often can be ignored.  In cases of gears with a few teeth the deviations become much larger and cannot be ignored.

When the gear tooth flanks are in line contact, it is anticipated that the contact pattern spreads over the entire tooth flank of the gear and the pinion as shown in Figure 9.

Bevel gears with a novel geometry of the tooth flanks are discussed in the paper. Three requirements which geometrically accurate gearing must meet are outlined.  Gearing of the proposed design satisfies all three of necessary conditions for geometrically accurate gearing. Due to that, the tooth flanks of the gear and the pinion are always in line contact with one another. Line contact of the tooth flanks is favorable as it allows for a reduction of contact stress. Because of the tooth flanks of the gear and the pinion are in line contact this significantly improves the contact pattern. Ultimately, the torque density can be increased; the noise excitation can be reduced, as well as performance of the gear pair in whole can be improved.  The gearing of the proposed design is especially useful in cases when tooth count of the gear and the pinion goes down to twelve teeth and a fewer.  Gears with tooth flanks of the novel geometry can be cut either on a multi-axis NC machine by a ball-nose milling cutter, or on conventional bevel gear generators using for this purpose novel methods of gear generating [2]. Conventional methods of bevel gear machining [3] enable only an approximated generation of the tooth flanks that commonly is applicable in case of gears with a large tooth count.  The gears can be cut to the blueprint, that is, with equal base pitches.  Once the base pitches of the finish-cut gears are equal (see the above listed requirement No. 3), then no lapping is required to finish bevel gears.

** Known formulae and equations derived for  bevel gears are also valid for gears with a large tooth count and not vice versa.
This equation was proposed by Prof. Shishkov as early as in 1948 (or even earlier) in his paper: Shishkov, V.A., “Elements of Kinematics of Generating and Conjugating in Gearing”, in: Theory and Calculation of Gears, Vol. 6, Leningrad: LONITOMASH, 1948.  In detail, this equation is also discussed in the monograph: Shishkov, V.A., Generation of Surfaces in Continuously Indexing Methods of Surface Machining, Moscow, Mashgiz, 1951, 152 pages.