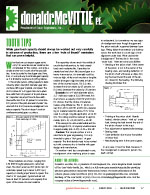 What load can you expect a gear set to carry? An accurate answer would be too complicated for this column, and while a simple answer won’t cover all of the possibilities, it can be useful to check gear size. Here, then, is a simple way to estimate gear capacity as it is limited by resistance to pitting failures.

In this simple system, pitting capacity is determined by pinion size (pitch diameter, gear ratio, and face width), gear material, and speed. The chart is drawn for a 3:1 gear ratio and a pinion face width that’s 80 percent of its pitch diameter. Capacities are proportional to face width. Face widths less than 50 percent or more than 100 percent of the pitch diameter shouldn’t be used with this chart, because misalignment can reduce capacity. The chart doesn’t work for cantilever-mounted gears or pinions.

Three materials are shown, ranging from 179 BHN through-hardened to carburized steel. The chart assumes 600 pinion rpm; for moderate speeds (up to about 1,800 rpm), capacity is directly proportional to speed. The chart is for spur gears; typical helicals will have at least 30 percent more capacity than spurs of the same size and material.

The capacities shown are in the middle of usual industrial practice, for fairly steady loads and moderate life. Capacities for steady load and short life (second gear in a tractor transmission, for example) could be twice as high, while a rock crusher or long-life turbine drive gear might be rated at half or less of the charted values. For 2:1 ratio, increase the chart values by 25 percent; for 6:1 ratio, decrease the values by 30 percent.

Caution: This simple system is not a substitute for gear engineering. It is only intended to give a “first guess” at gear capacity. The final details need to be worked out with someone who is familiar with gear design and manufacture.

On another–and less complicated–note, misalignment of an overhung pinion is easy to understand, but sometimes we see signs of misalignment even though the gear and the pinion are both supported between bearings. Pitting failure that extends only halfway across the tooth face is a sure sign of misalignment under load. What caused the misalignment? The key lies in the words “under load.” Here are some possibilities: