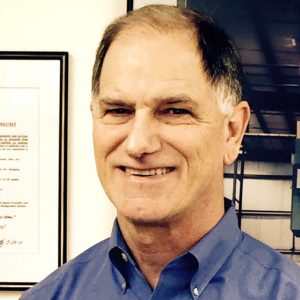 Could you give us a look into the history of Ohio Broach?

In 1955, my father Charles “Bud” Van De Motter started Ohio Broach in my grandfather’s four-car garage, and it was incorporated in 1956. He worked as an engineer for Cleveland Broach back after the war for roughly seven or eight years before going out on his own. He bought a couple of machines and continued sharpening broaches.  Back then, it was small machines and a small group of customers—people they knew and who they had worked with at Cleveland Broach.

In 1974, he moved out to Willoughby, Ohio, which is where we’re located now. He bought a 20,000-square-foot building that he had tailored to put a pit in for big machines. Since that time, we’ve had five expansions. Now, we occupy a building about 50,000-square feet.

Bud has been a part of this company for his entire career, about 58 years or more. He retired from “active duty” in 2009, and now serves as the chairman of the board.

I took over around 2007 and became president, and Bud became CEO. Before that, I became the general manager in 2001, and Bud was president. When the downturn hit in 2008, we were hit especially hard. Now, we have approximately 35 employees. Since 2009, we have increased our sales approximately 8-10 percent per year. It has been difficult, but it has been a big plus.

It sounds like your dad created a family business when he started Ohio Broach. Can you tell us more about that aspect of the company?

Yes, it is a family business. Back when my father started the company in his father’s garage, drafting was done on a board with a pencil. We did our basic machines from that point, and then grew into the 2-D and 3-D CAD.

I grew up in the business. I went to college at Marquette University and graduated with an engineering degree in 1976. Then, I went back to school to get my MBA at Cleveland State University in 1987. I started working at Ohio Broach in 1977 in the engineering department.  I worked my way up at the company by doing everything in the shop from sweeping floors to running around and setting up machines. I was raised up in the business. Ohio Broach is where I started, and it’s where I ended up.

What is your company’s relationship with its customers like?

We service automotive, aircraft, medical, defense, fire arms, agriculture, hand tools, and broaching is a very small part of those types of industries. When you think about machining, you think of turning and milling, but there are some operations that can only be done by broaching, like an internal involute spline. Broaching allows you to get high-quality production and maintain a high tolerance. Broaching is a one-pass operation. You rough it out and finish it all in one pass.

Normally, broaching is meant for a large volume of parts where batch processing is used extensively, but sometimes broaching is the only way to machine a part.

We have customers all over the world. We sold equipment to companies in France, Holland, Israel, South Korea, Mexico, Canada, Ireland, and the Philippines. We have equipment everywhere. It’s all broach machine equipment—surface broaching and horizontal broaching—all for different styles of broach equipment—like manufacturing, automotive parts, fire arms parts, and defense parts—all for different places. We make the tools and the broach tool holders for those. We can do a turnkey package, completely tool up a person, come in, run it off, and have them come in and take it to go from there.

Broaching is a niche industry. We provide service in that area, and we have to keep on top of that. Obviously, it’s very competitive. We have a number of competitors. It’s a matter of staying with your customer and giving them the service they need, whether it be sharpening the tools, providing delivery, or helping them with their problems.

What are some new products Ohio Broach has been working on?

In 2013, we came up with a CNC shaping machine. The intent of this machine was to machine or shape blind splines. A blind spline means that the hole in the part doesn’t go all the way through. We need a little relief on the bottom. We sold a couple of these shaper machines in production. It’s doing an automotive part with a six-spline form in it. Cycle time is approximately 30 seconds per part. It is advantageous in that normally a blind spline requires a multi-station as well as multi-tool machine. These machines run up somewhere around $750,000. This particular machine that we’re selling is about $200,000. So, there is an advantage on the capital equipment side. On the tooling side, a set of tools for the blind spline-broaching machine runs around $25,000 to $30,000, depending on the size and the capability. We use a carbide insert with our tools that is specially formed, and it’s $150 to $200. You get an advantage in that respect, also. However, the disadvantage is that they get a part off every 15 to 20 seconds, and we require a slightly longer time to do that. It’s cost effective as far as equipment and tooling goes. If you have a crash with ours, you may only have to replace the tool holder and the tool. That’s $500 to $1,000 versus $30,000.

We’re advertising on our website, and we’re exploring a lot of different avenues to get experience. We’re getting more and more confident in how we use this machine.

Tell us more about the products and services Ohio Broach offers.

In the early 60s, he moved out of his father’s four-car garage and started running some contract production jobs. There, he started broaching as well as sharpening and making tools. He bought a couple of broach machines and performed broaching services on it for different companies who needed broaching work and didn’t have a machine that fit.

In the mid 60s, he started rebuilding broach machines and equipment. Then, in the late 60s, he started to manufacture special broach machines. In the early 70s, he got into his own line of high-speed broach machines, which were vertical machines. In September 1974, he moved out to Willoughby, Ohio, which is where we’re located now. He bought a 20,000-square-foot building that he had tailored to put a pit in for big machines. He put his production machines on one side of the plant and all of the grinding machines on the opposite side. Since that time, we’ve had five expansions. Now, we occupy a building about 50,000-square feet.