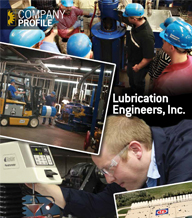 In 1951, three men took a risk. They left the company they worked for behind and ventured out on their own to provide the clients and industry they served with a superior lubrication product. Now, more than 60 years later, their legacy lives on at Lubrication Engineers, Inc.

In the early years, the company’s products were manufactured by compounders/blenders. That lasted until 1979 when they built their own facility in Wichita, Kansas. Relocating production to their own plant meant one thing for these business pioneers—complete control over their product.

“They did this so they could control their own future as opposed to their production being at the will of some other company,” said Scott Schwindaman, president and CEO of Lubrication Engineers. “They went from being a marketing company to actually being a manufacturer.” 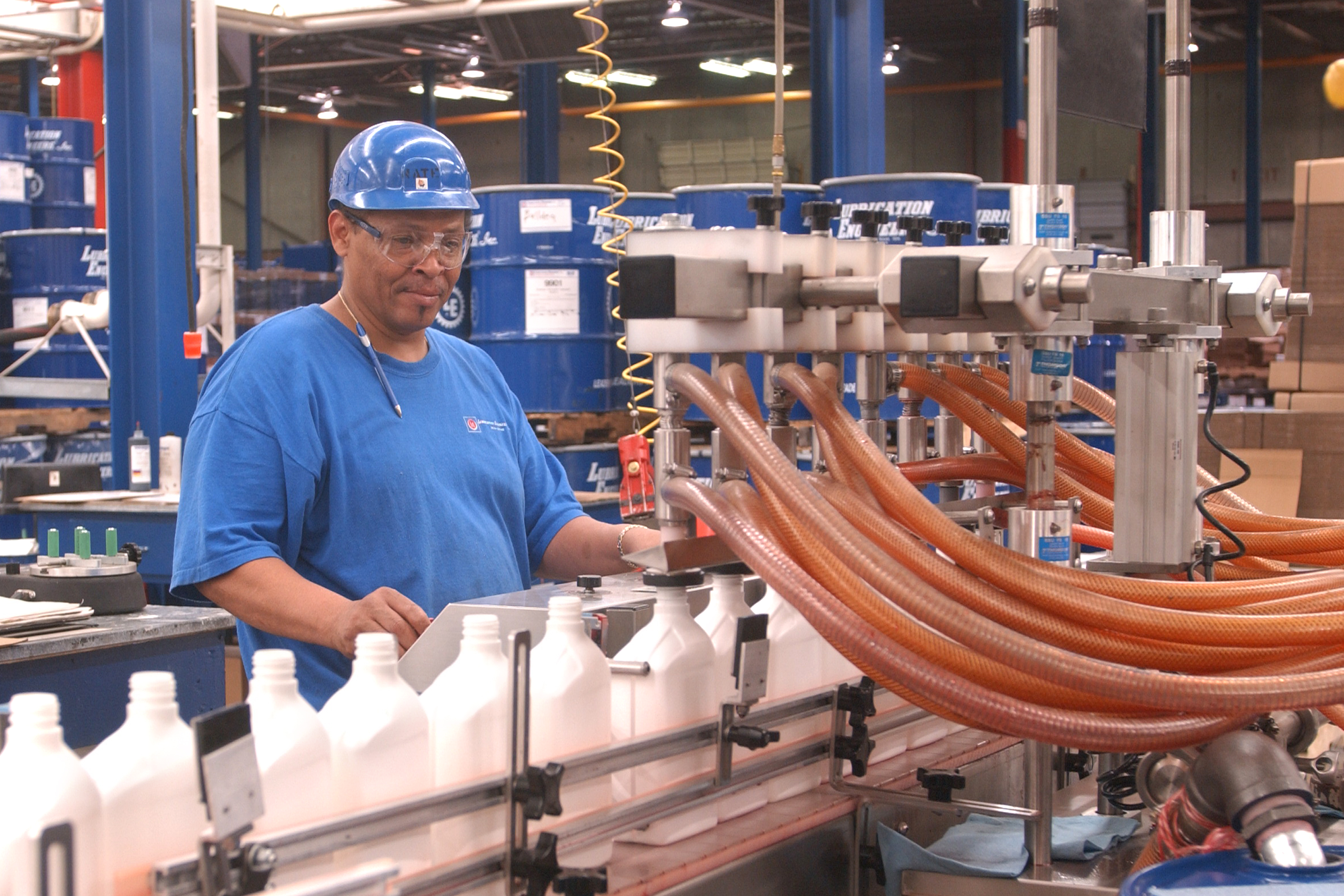 Since that time, LE has established itself as a trusted reliability partner to companies all over the world by manufacturing and distributing its own high-performance lubricants. It has also grown to include what Schwindaman refers to as engineering services, which make up roughly 20 percent of the business, including training people at their respective facilities or at Lubrication Engineers’ facility, completing asset surveys in plants to identify every piece of equipment in need of lubrication, determining what the proper lubricant would be per the OEM manual, and identifying what the correct drain interval should be.

According to Schwindaman, Lubrication Engineers’ enhanced lubricants—which are made of highly refined or synthetic base oils and proprietary additives—outperform conventional lubricants in a wide variety of industrial and automotive applications.

“You have the commercial-grade products that are available in the industry today, such as gear oils and greases,” Schwindaman said. “We tend to build our products to extreme specifications. Where most commercial-grade products are built just to meet a minimum specification, we look at the application to see what we can do to build the very best possible lubricant for that application. That’s because we’re looking at the durability of the lubricant. We see the lubricant not as a consumable, but as an asset. 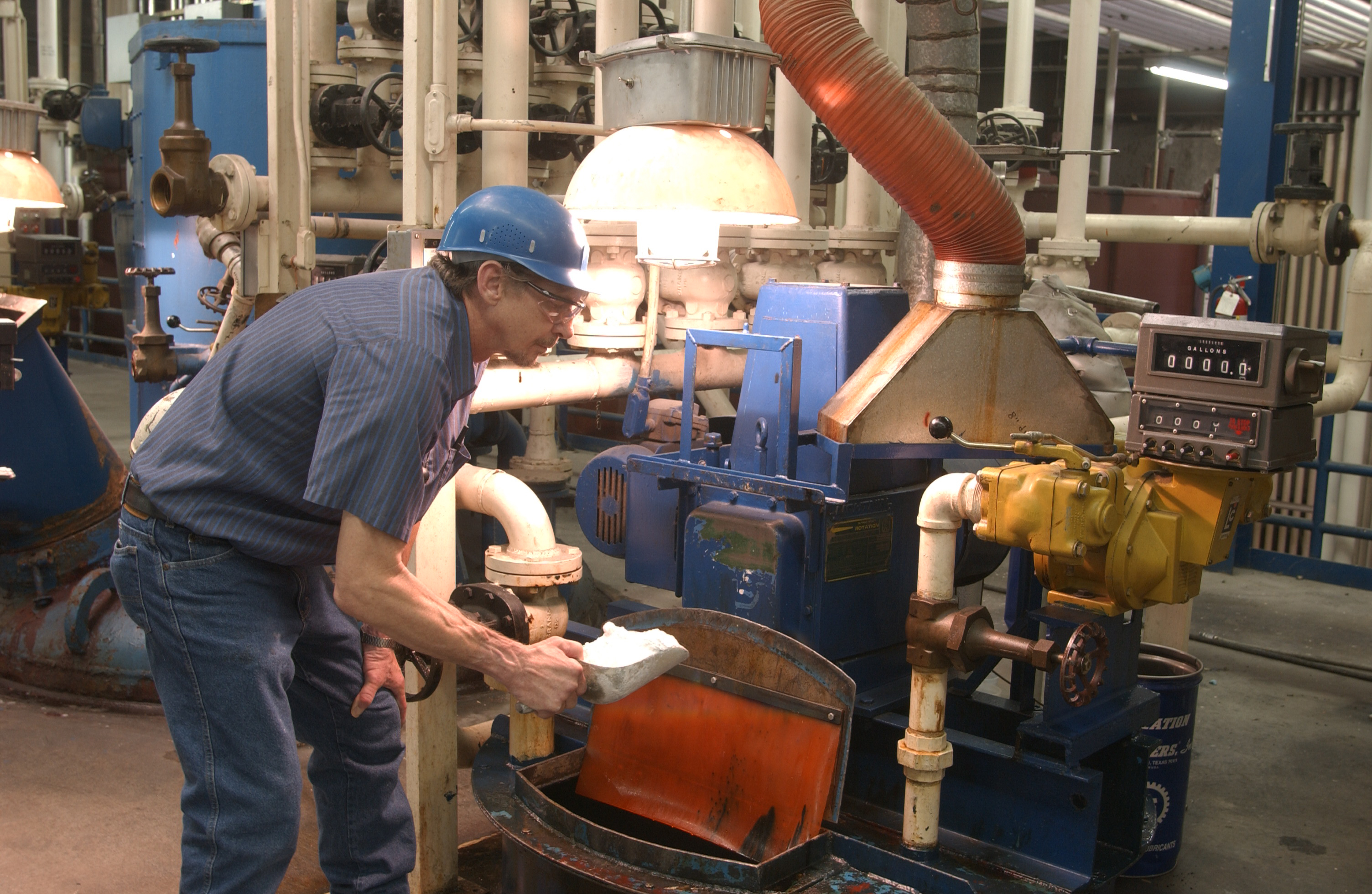 “If you take care of the lubricant by keeping it clean and dry, it should last for an extremely long time. There’s no reason anyone should ever have to change the lubricant out unless it’s at the end of its useful life. We’re also environmentally conscious in that we don’t want to waste natural resources. We want our customers to get the maximum bang for the buck out of that lubricant and protect the lubricant  as they would any other asset. It’s not unheard of for us to have drain intervals that are four or five times the length of commercial-grade products in the same application. That’s what makes our products different.”

To help its customers take care of their lubricants, Lubrication Engineers offers a complete line of lubrication reliability products and services, including solutions for oil analysis, storage, handling and transfer, contamination exclusion, contamination removal, and education.

“We also started training our customers’ personnel at their locations to help them understand the best practices of lubrication maintenance and application,” Schwindaman said. “In addition, we did some other types of informational training here in Wichita, which resulted in us building a training room. Today, we have approximately 100 different customers who send people through our training programs every year.” 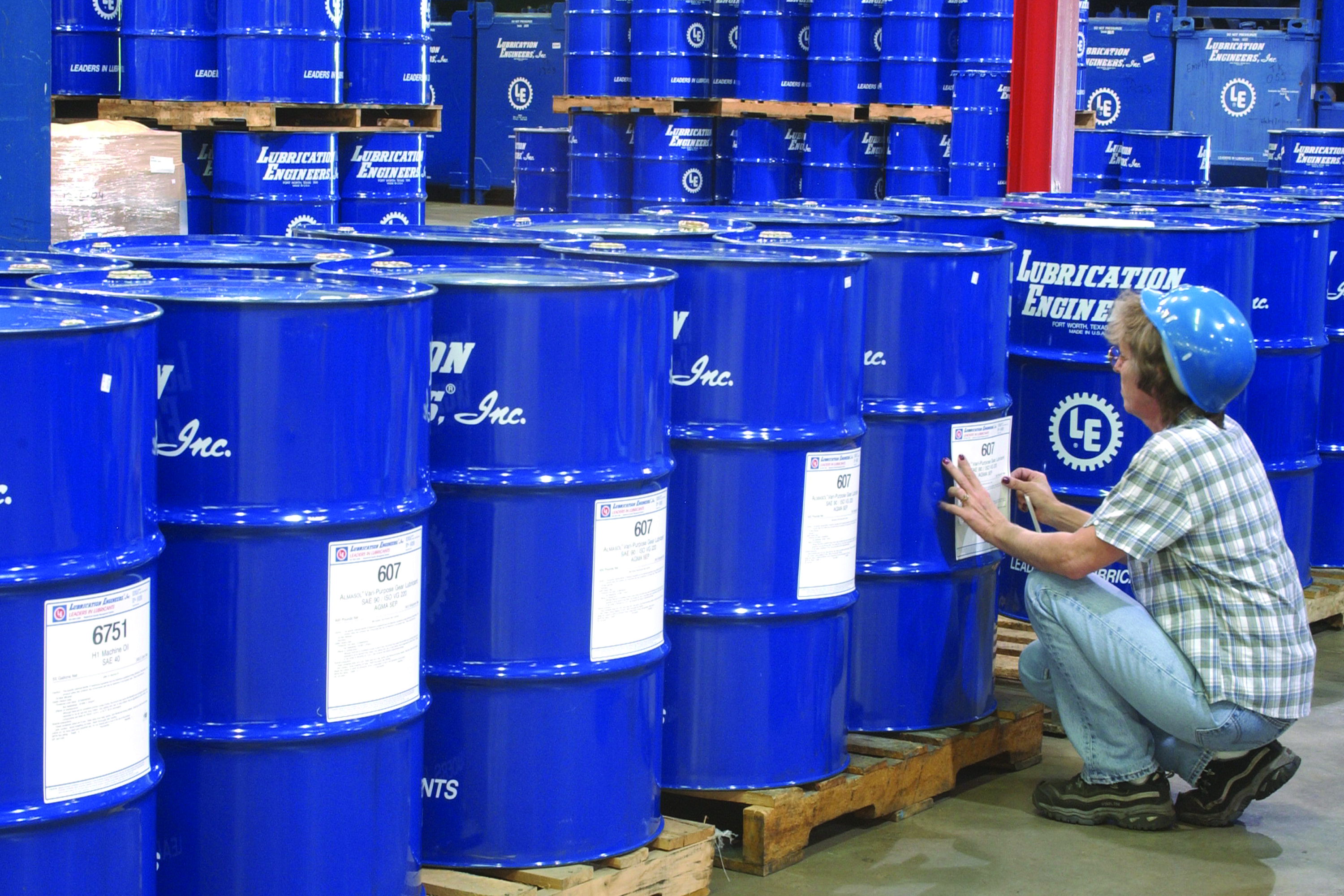 Since its inception, Lubrication Engineers has expanded into multiple facilities. In Wichita, the company houses its manufacturing, research and development, financial, and marketing operations. Sales and service personnel operate out of Fort Worth, Texas, which is where the original home office was established more than 60 years ago.

“If you have a technical question, you’re going to call our office in Fort Worth and speak with a degreed engineer about your question on a particular piece of equipment, and they’re going to be able to get the answers for you there,” Schwindaman said. “Then, our research and development and quality control people here in Wichita will back up whatever testing they may need done.

To accomplish timely shipments to customers, Lubrication Engineers has two regional warehouses—one in Knoxville, Tennessee, and another out west in North Las Vegas, Nevada—in addition to its warehouse in Wichita. 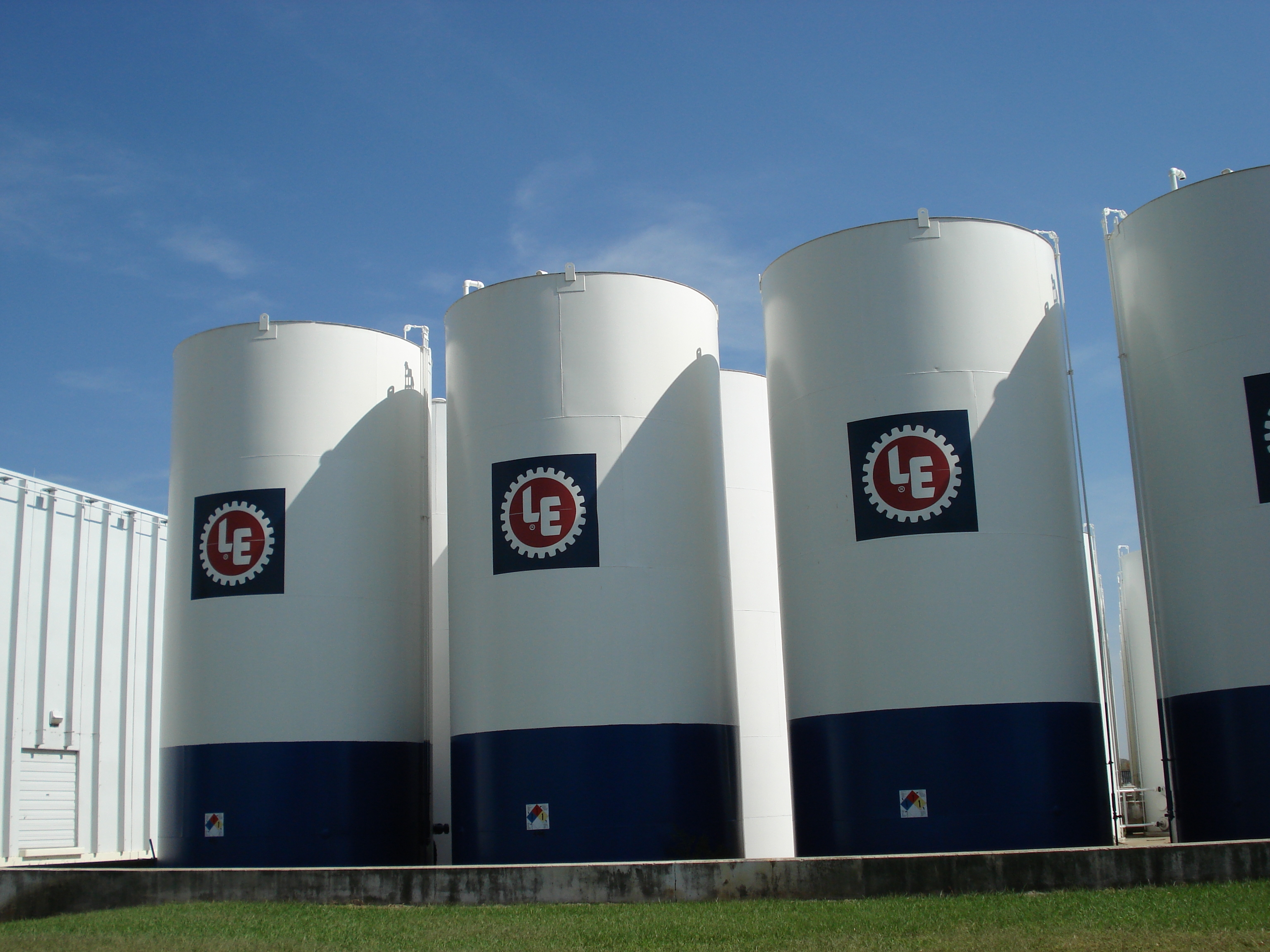 “Because of where the warehouses are located, we ship 96 percent of the orders that come into us within 24 hours. At 48 hours, over 99 percent of everything is shipped to the customer. There is no delay in shipments—whether it’s a pint bottle or a railcar lubricant.”

Also, with roughly 70 international distributors, the company has extended its reach across the globe. Located outside of London in Theale, England, Lubrication Engineers International handles most of the company’s international clients.

With customers in a variety of industries other than gear manufacturing, including agriculture, food and beverage, oil and gas, mining, and industrial equipment, Lubrication Engineers needs a lot of manpower to meet the demand for their enhanced lubricants and reliability solutions.

According to Schwindaman, in the United States, the company has close to 150 employees and 64 independent consultants.  Of that total, nearly 90 are out in the field taking care of customers on a regular basis. When you factor in the international distributors and their employees, it adds up to approximately 700 people under the company’s employ.

“In addition to the commercial work we do for industrial customers, we also do work for the U.S. Departments of Defense and Energy,” Schwindaman said. “One of the products we make is a proprietary dry film lubricant, which is used in military and space applications. 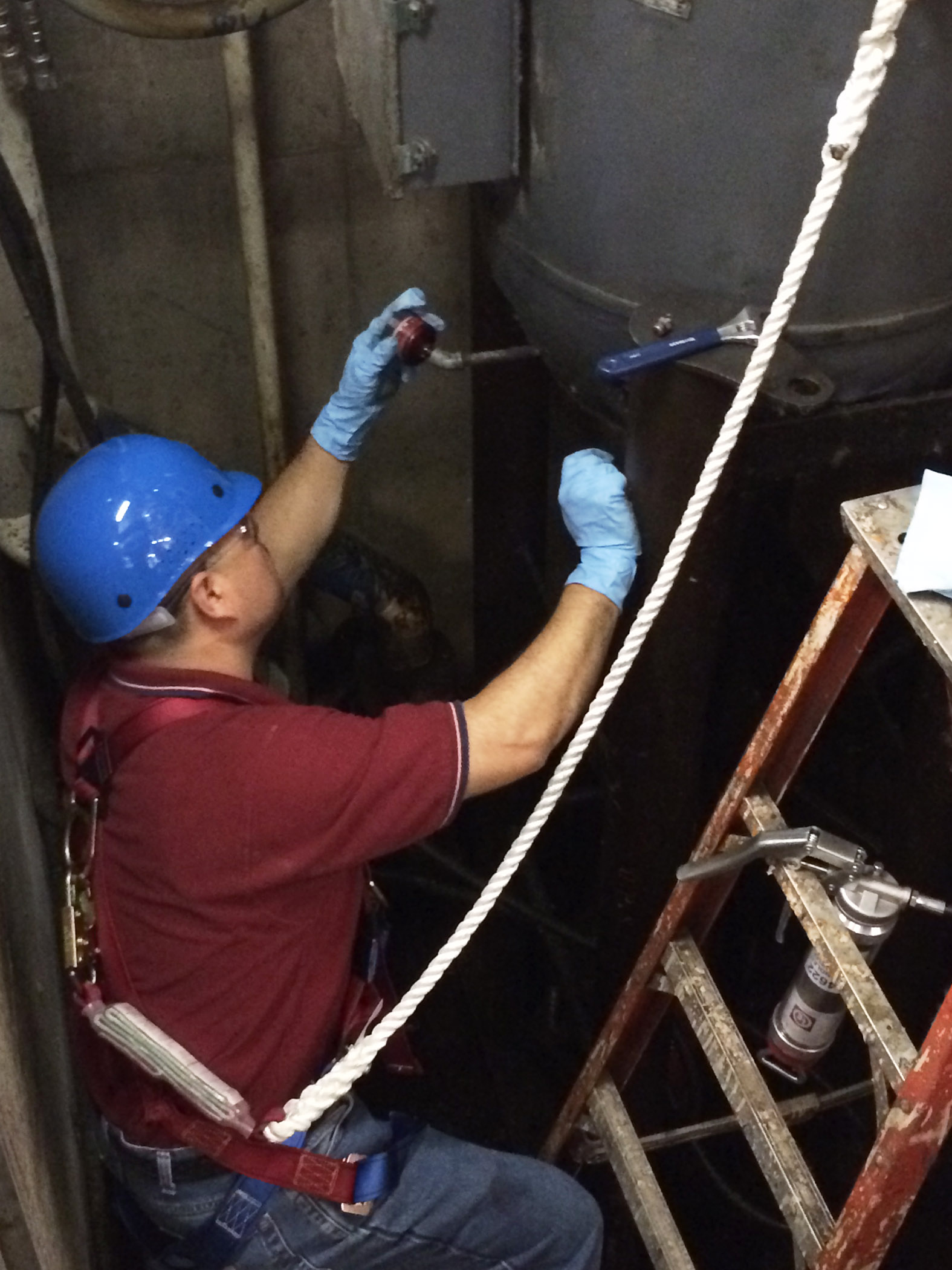 However, no matter how big LE is or may grow to be, customer service and reliability are engrained in its core and are its main priorities.

According to Schwindaman, when a customer calls a company for a lubricant recommendation, it is typical for a major lubricant manufacturer to cross-reference the lubricant the potential customer is using with one of their competitive products and just leave it at that.

“We don’t do that,” Schwindaman said. “In today’s markets where equipment is being pushed to extremes and, sometimes, beyond its design capability, we actually go to look at the piece of equipment, identify the proper lubrication for that equipment, and even sometimes go as far as looking at manufacturing a new lubricant that will keep that piece of equipment up and running due to the rigors it must perform.

“On the services side, we emphasize our attentiveness to each individual customer—whether they need technical support, sales support, or product delivery. We’re all about getting the product to them in a timely manner to put them back in operation because we understand the costs associated with downtime.”

That’s not to say that Lubrication Engineers  hasn’t been met with its fair share of challenges. However, with each obstacle, the company was able to rise to the occasion and successfully get its product to the customer in a timely manner.

Take, for instance, the time when one of Lubrication Engineers’ customers—a mining operation in northern Texas—found out that one of its gear sets that is supposed to be greased and re-lubricated was not given the attention it needed. 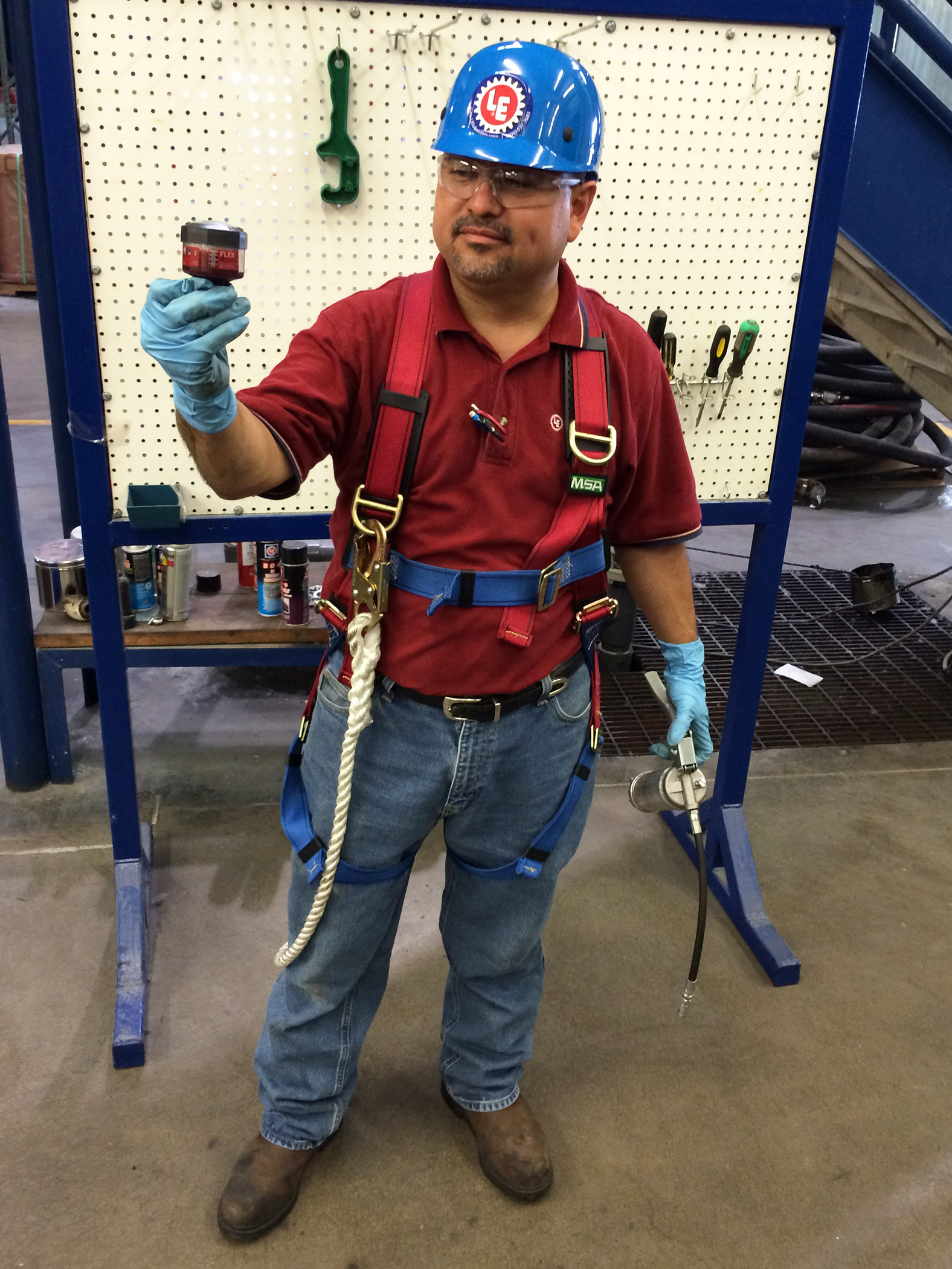 That’s only one example of how the company heard one of its distressed customers calling out for help and flew to the rescue. Recently, there was an issue with a drilling company in Alaska that was doing drain intervals on the trucks they used to haul crude oil from the well site to the ocean-bound freighters in Prudhoe Bay. According to Schwindaman, they were changing their lubricants every 200 hours on a truck fleet made up of roughly 1,500 tractors.

“We extended their lubricant change interval time to 800 hours,” Schwindaman said. “We’ve also been analyzing the oil for wear metals, which are dramatically lower with that 800 hours than they were with the commercial-grade product at 200 hours. And we’re not done there. The next phase of the test will be to take them to 1,000 hours. We’ll continue to push that drain interval until we see that we’re having an impact on the engine’s durability, and then we’ll back off that by 200 hours, and that’ll become their drain interval. We’ll always continue to monitor those engines to make sure there’s nothing going on with them. That particular customer is saving somewhere around $12 million per year, according to their own calculations.”

These types of situations happen almost every day, but, according to Schwindaman, that’s what makes working at Lubrication Engineers so satisfying.

“The great thing about LE is all of the interesting stuff we get to do and see, and how we get to help the customer. You never have to apologize for the products because they perform tremendously well. When you’re able to improve profitability for a company to the magnitude we’re able to, they become lifelong customers. It’s not that we’re just selling something. It becomes a partnership.”