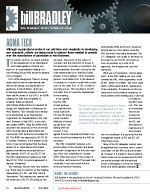 This column will focus on recent activities for the development of an international wind turbine gearbox standard and report on an organizational meeting of a Joint Working Group (JWG) formed to develop such a standard.

First a little background. There is a recognized need to have an international standard for the design and specification of gearboxes in wind turbines, which are increasingly becoming a popular source of clean electric power. In July 2003, an AGMA meeting was held that completed an American National Standard ANSI/AGMA/AWEA 6006-AO3 Standard for Design and Specification of Gearboxes for Wind Turbines. This standard was intended to be fast-tracked as an International Organization for Standardization (ISO) standard. However, in May 2003, a new work item project (NWIP), citing the AGMA 6006 document was proposed on the same topic within the International Electrotechnical Commission (IEC) Technical Committee (TC) 88. This NWIP was approved by IEC/TC 88 in October. Therefore, in the interest of harmony, it was recommended that the development of an international wind turbine gearbox standard be accomplished by a JWG between ISO/TC 60 and IEC/TC 88. The JWG organizational meeting was held May 27-28, 2004, by mutual agreement in Geneva, Switzerland.

The meeting's results were very interesting. There were 45 persons at the meeting representing ISO, IEC, and their Central Secretariats. The meeting was opened with the chairman of IEC/TC 88 acting as the convener. Discussion of the status of members and the resolution of issues in the absences of consensus resulted in the recommendation that each country be officially represented by its National Bodies present in the meetings. Other interested persons could attend, but in the absence of consensus a country would have a maximum of two votes (ISO, or IEC, or both) in resolving issues. This resulted in 16 official votes from 10 countries represented at the meeting.

The JWG completely reviewed a proposed outline of the standard and developed work assignments for the next meeting, which was scheduled for October 2004. After discussion of the content of the outline, and because of the need internationally, it was discussed that the American National Standard, ANSI/AGMA/AWEA 6006-AO3, should be fast-tracked as a first edition while the JWG document was being developed. The U.S. delegation was asked to fast-track its document as an ISO/IEC document as soon as possible, by a vote of 10 approvals, five disapprovals, and one abstention.

What was not resolved by "mutual agreement" at the JWG meeting was who would convene the JWG, which organization would be the "parent committee," and which organization will be responsible for maintenance of the publication. The decision on the convener could not be made by consensus of those present at the meeting and a vote was not taken by the (IEC) chairman. The "parent committee" was not discussed, but assumed as the IEC, and the subject of maintenance of the standard was not considered. It is assumed that the management boards of ISO and IEC will solve these issues.

Many of the ISO delegates present were disappointed that a convener and a "parent committee" for the JWG could not be elected. However, it is hoped for that all administrative issues can be resolved and the JWG can quickly proceed with the technical issues of developing a consensus international wind turbine gearbox standard.